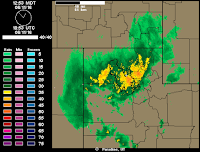 Paradise ponders...   As I write this post, it's raining outside – a nice, steady, moderate rain.  The forecast says we're to expect about 0.15 inches, but I'd guess we've already got that much, and the storm is only about half over.  The storm is coming from due south of us, and on the radar snapshot at right you can see that we're about to get slammed with some harder rain.

The farmers around us have started to cut and bale hay.  My neighbor to the north, Tim D., just had his baled on Wednesday.  Yesterday I picked up 21 bales of around a half ton each from the 3.5 acres he's raising alfalfa on.  That's up substantially from the yield last year, much to his satisfaction.  He'll get three cutting this year, and probably between 25 and 30 tons of hay total.  On our own field to the south of our house, we have 11 acres in alfalfa (it's leased out to Scott N., a local hay farmer who mostly uses leased land).  Scott hasn't cut that field yet, but he likely will within a day or two.  All this cutting, hay drying, and baling means that the air around here is full of the delicious aroma of alfalfa and grass hay.  The farmers who are caught with hay cut and drying right now are not going to be happy about this rain...

The puppies continue to be a joy for Debbie and I.  The video at right shows Cabo enjoying a delicious stick, until Mako comes along and tries to steal it.  Yesterday I took the two of them in to see our vet for their second round of puppy inoculations.  In the waiting area they were a big hit with the staff, the dogs waiting, and their owners.  Lots of people asked what breed the dogs were, and several of them were writing it down.  The vet (Dr. Watkins) gave them a good exam, then pronounced them beautiful and perfect.  After he gave them their vaccines, he just sat back and watched them for a few minutes, a happy smile upon his face.  He told me that I had made his day by bringing these two in – and that I should be charging him, rather than the other way around :)  There are now a couple hundred puppy videos uploaded to YouTube, most of them around one minute long.  Any of them will make you smile (and if you don't smile, please schedule an appointment with a psychologist posthaste!).  The photos below capture a few kinetic puppy moments, and the joy of Debbie at last able to hold a puppy. 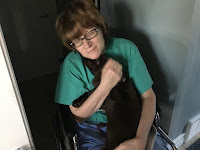 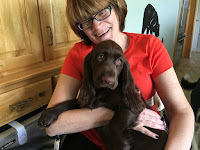 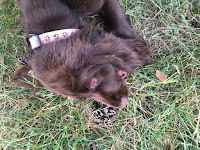 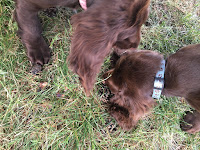 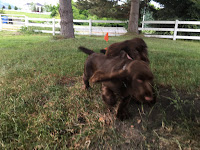 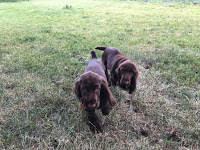 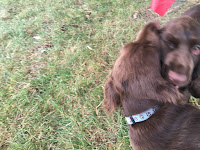 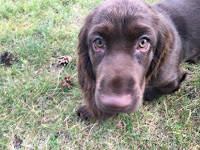 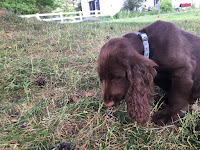 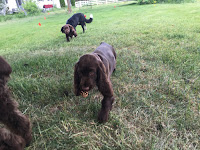 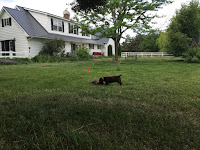 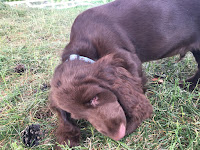 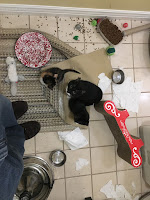 Meanwhile, our five foster kittens are thriving.  They've had their first round of inoculations, and they're old enough now to be rambunctious and naughty.  Very naughty!  The photo at right shows their room after they apparently held a party in it on a recent night.  Some of those objects are heavier than you'd imagine a kitten could move, and yet there the mess was.  Shortly the kittens will all be neutered and get a second round of inoculations, then we'll be returning them to the Four Paws organization for adoption.  One of them will likely be staying with us, though: the little calico kitten has captured not only Debbie's heart, but also our friend Michelle's.  I think I'd suffer terribly if I didn't cave in to their desire to keep her.  Not that I'll get any credit for caving, of course :)

A few days ago I somehow found an hour to talk my beloved morning walk.  It was overcast and cool, and the dogs and I had a lovely time exploring all the life around us.  The lowest field we walked by was planted in alfalfa, and it was in bloom.  There was a leaker riser that provided great entertainment for Race, who loves to bite streams of water.  He went sort of bonkers for about five minutes, apparently thinking he was defeating the water.  He wasn't, of course :)  Our neighbor now has four horses and two mules pastured, so we stopped for a while to chat with them.  Then there were large patches of a beautiful yellow weed.  I'm sure the farmers would do their best to eradicate these, but when the show up in great masses (as they are right now), these tiny yellow flowers can be quite beautiful... 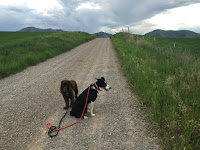 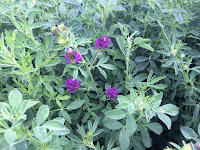 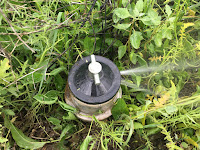 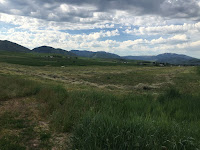 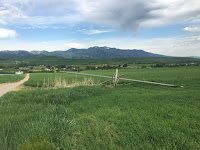 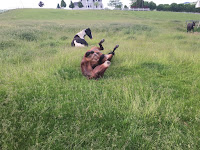 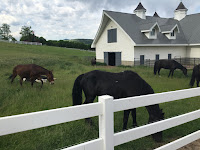 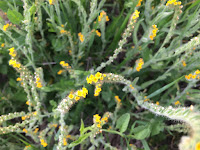 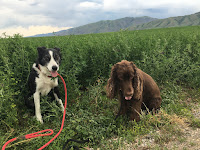 Posted by Unknown at (permalink) 1:07 PM No comments:

Of friends and raspberry pie...

Of friends and raspberry pie...  The first friends we made up here, just over two years ago, were Bruce and June N.  They were the realtors who helped us find our home here, and since then have become good friends.

Yesterday Bruce was driving home (they live just south of us, in Avon) from Ogden, a route that takes him past Maddox Restaurant.  Knowing that we love fruit pies, he stopped in and got a raspberry cream pie for us.  Usually fruit pies from restaurants are ... less than spectacularly good, but Maddox is a standout exception.  Many of their fruit pies are made only when the local fruit is in season, and that's the case with their raspberry cream pie.

Last night we'd already eaten when Bruce showed up with the pie, so it went into the refrigerator.  Today we just ate our lunch, and we each had a nice slice of that pie for our dessert.  Heaven in our mouths, it was.  I don't know how one could get more intense raspberry flavor than that pie.  The cream filling and whipped cream on top just added to the overall decadence.

When my mom first got to Utah a couple of weeks ago, Bruce and June were the first local friends of ours to visit with her.  Mom greatly enjoyed meeting them, and experiencing a heavy dose of Utahan niceness; Bruce and June likewise enjoyed meeting this character from New Jersey.  Bruce told me afterward that he was really looking forward to getting to know mom better.

Bruce didn't know that mom had died, so yesterday afternoon when we told him, he was quite shocked.  When he and June visited mom, just 10 days ago, she was energetic and brimming with vitality; there was no indication of someone near the end of their days.  After he recovered his own composure, he was full of compassion and sympathy for us.  We had a warm conversation about mom, losses of loved ones, the trials and tribulations of life, and more.  It was one more manifestation of the reasons why Debbie and I feel so very lucky to have joined the community here...
Posted by Unknown at (permalink) 11:55 AM No comments:

The story of “Mildred”...  An astute reader noted that the filtered view (link at right) for my mom uses the tag “Mildred”, and she wondered why.  After all, my mom's name is Elinor, not Mildred.  So what gives?

I don't remember how it got started, but in her later life “Mildred” was my mom's favorite nickname for herself.  It was used by both family and friends, and she often asked people to call her Mildred.  I do remember that at one point, when I was a child (this would be back in the '60s), we'd tease her by calling her Mildred – and she reacted just as you hope someone will react when you're teasing them.  We'd say things like “What a Mildred!”  Sounds quite silly now, but my mom didn't appreciate it.  She certainly didn't embrace the nickname as her own back then!

Her given name is actually Elinor, a slightly unusual variant of the name that's usually spelled Eleanor.  I've no idea why her parents chose the spelling they did, but I will note that the name Eleanor was very common for girls in the year she was born, and that spelling variations (including Elinor), while not as common as Eleanor, were certainly not rare.  I've only run into two much younger people who spelled their name as Elinor: one a young woman of perhaps 25 years, born in England; the other the baby girl of an employee of mine, adopted from a Chinese orphanage and named in honor of a grandparent.  I suspect it's pretty unusual these days, even if it wasn't in 1935.
Posted by Unknown at (permalink) 11:34 AM No comments: