Paradise ponders, toasty office edition...  My office woodstove is burning a nice chunk of black walnut, and the temperature in here is 74°F (but it's only 7°F outside).  Ah, that nice heat feels so good!

Over the past couple of days I've had a frustrating experience with Nest's support for their thermostat.  We have five of them (two in our house, and three in our barn), and for the most part they have operated flawlessly.  However, a couple months ago one of the thermostats in our house started misbehaving.  From the on-screen indications it was obvious that the battery wasn't charging.  I thought at first that it was a problem with our furnace, but after lots of troubleshooting I came to suspect that the battery in the thermostat was failing.  I then decided to take one of the thermostats out of the barn and install it in the house, and now it has worked flawlessly for several months.

So yesterday I set out to see how to fix my thermostat.  It's a lithium-ion battery, so how hard could that be?  A little googling and I determined that I had a second generation Nest.  A little more and I found unofficial teardown instructions – and it looked really easy.  The battery, however, is a proprietary one.  How could I get one of those?  My usual sources (Mouser, DigiKey) had nothing.

The next thing I did was to contact Nest support via their chat application, where I briefly described the situation and asked if they could provide me with a replacement battery (which I'd be happy to pay for).  After a bit of back-and-forth with the very polite support agent, I determined this:
This response, I thought, was completely inadequate.  I told the agent how disappointed I was with that response, and that I would replace the thermostat with one of another make.  She then said “Let me go check with a senior agent”.  After a bit she came back and said that she'd gotten approval for a no-cost replacement.  Well, that sounded great!  But unfortunately I had to leave my computer at that moment.  So she sent me the case number for our session, and said I could chat with anyone there to make arrangements for the replacement.  I was very happy with that resolution, which was actually more than I had been expecting.

But (and you knew there was going to be a “but”, didn't you?) when I started a chat session with another agent, an hour or so later, there was apparently no record of the approval for a replacement.  I told the agent what had happened, and he promised he'd look into it and email me back shortly thereafter.  I waited a few hours, but got no email.  So I started another chat session with yet another agent, and had basically the exact same interaction.  After that I went looking harder for a replacement battery, and found one from a highly-rated seller on eBay.  I waited until this morning, and then tweeted about my frustration and started yet another chat session – but this time I got the same agent (Kathleen G.) that had gotten approval for a replacement on the day before.  She apparently had some record of that approval, because shortly after we finished up I got an email from Nest confirming the imminent shipment of a replacement thermostat.  I'll be sending them the dead one back, presumably for repair (which makes me wonder why the don't offer repair as a service, as I'd have been happy to pay for that).

Apple handles this sort of thing so smoothly, so easily, that I have come to expect that from other high-end hardware – it's jarring and disappointing to find out that's not the case.  It's not quite bad enough to cause me to eliminate Nest products from consideration in the future, especially since after some hassle my problem did get resolved – but it's darned close. 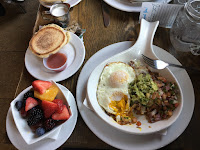 Yesterday we had lunch at Herm's Inn, and both of us had their carnitas skillet.  I ordered mine with a fruit cup instead of potatoes – I've done that before, so I knew I was in for a treat.  The carnitas were excellent; nicely spiced slow-cooked pork with salsa fresca, guacamole, and a couple of eggs over easy.  The English muffin came with some excellent raspberry freezer jam.  The fruit cup was simply superb: perfectly ripe strawberries, blueberries, black raspberries, and an orange slice – and a few grapes for sweetness.  Their potatoes are good, too – but in my book, those fruit cups are way better... 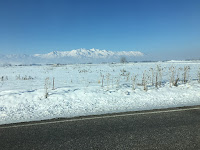 On the way to Herm's, we drove through the classic inversion layer that happens in the winter, mostly to portions of Cache Valley north of our house.  Yesterday it got us as well.  The haze made for an unusual view of the Wellsville mountains to our west, though.  I snapped this as we drove north on State Highway 165, just south of Hyrum. 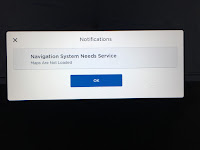 We were driving in our Model X, and we noticed something odd at the top of the big center screen: a red triangle with an exclamation point in it.  That didn't look good!  When I clicked on it, I got the dialog at right.  What the hell does that mean?  Sure enough, when I tried to navigate somewhere, I got an error message.  There was no clue on-screen about how to fix it.  So when we got home I did some googling, and quickly found out that (a) that error is fairly common, and (b) you fix it by rebooting the computer that runs the center console.  With some more googling, I found out that you reboot that computer by holding down both the left and right scroll buttons on the steering wheel for a few seconds.  I tried it, feeling a bit like I was having a trick played on me, and ... it worked!  It took about 30 seconds to reboot, and then everything was working fine again.  I haven't used Windows for quite a few years now, but this instantly brought to mind the CTL-ALT-DEL ritual that every Windows user knows by heart.  C'mon, Tesla, you can do better than Uncle Billy, can't you?
Posted by Unknown at (permalink) 11:39 AM 4 comments: