The Beast of Turin runs...

The Beast of Turin runs...  A 28 liter engine on a car that's over 100 years old, running again.  Via reader (and sadly, still a California resident) Simi L...
Posted by Unknown at (permalink) 7:38 AM No comments:

The ascent of man...

The ascent of man...  These people are crazy!  Watching this makes me feel (however briefly) ... normal...
Posted by Unknown at (permalink) 7:34 AM No comments:

Buttons that do nothing...

Buttons that do nothing...  An interesting article from the BBC about buttons and other controls that do absolutely nothing, but make people feel better anyway.

This is not new understanding.  Back in the early '80s, a customer for my design consulting practice introduced me to the same idea.  The customer was a firm in San Diego that built specialty radios, mostly for the commercial maritime trade.  These were sturdy devices that internally were quite advanced systems, but were being used by fisherman, cargo ship crews, and the like – not technically advanced folks, typically.  They also didn't have the habit of being gentle with their gear :)

I was contracted to build the first radio receiver they'd ever produced with a digital front panel.  The company's own engineers were analog folks, so they hired me to design all the digital parts as well as the interface to the analog side.  Most of this was very straightforward.  One seemingly simple element was the volume control.  Back in those days, controlling volume digitally was a bit of a challenge.  One couldn't simply go out and buy something like an 8-bit digital-to-analog controller (DAC) at a reasonable price.  So we decided to settle for a 3-bit DAC made from discrete components.  This provided 8 volume levels, which the company decided was more than sufficient – most users would simply turn it to the max, and leave it there.  I designed in an 8 position rotary switch that provided a click-stop at each of the 8 possible volume levels.  It worked great.

The company took our prototype and sent it out on a boat with a real customer to get feedback.  Mostly the feedback was very positive, to the delight of the entire team.  But ... the customer hated the volume control.  He claimed that the volume he wanted was always directly in between two of the click stops.  I was dismayed, and foresaw a difficult challenge – one that would likely bust the production cost budget.  The founder of the company was unperturbed, though.  He told me to put in a switch with no click stops, just smooth continuous motion.  To do this, we had to switch to a gray-coded DAC (to avoid glitches at the switch points), but that was relatively easy and cheap.  Then we sent the prototype back out to the same customer for testing, with a couple of other minor changes.

The result?  The customer was totally pleased, and reported that the volume control now worked exactly as expected.  Several follow-on testers reported the same thing.  Note that there was no actual change in function – the only thing we did, functionally, was to remove the click-stops.  The smooth motion of the switch now gave the customers the illusion of analog control, but the reality was they still had just eight discrete volume levels.  Customers were happy, and so was the company that employed me, as the new design actually turned out to be slightly cheaper to build.

I've remembered that incident ever since, and I confess that I've employed the same technique several times since then.  It worked every time.  I'm sure I've been fooled (and satisfied) by non-functional controls myself, many times.  We humans are funny beasties, aren't we?
Posted by Unknown at (permalink) 6:00 AM No comments:

Is it proper for women to be learned?

Is it proper for women to be learned?  That's a question from an advice column of the 1690s.
Posted by Unknown at (permalink) 5:42 AM No comments:

Oh, the blue sunsets of Mars!

Oh, the blue sunsets of Mars!  As seen by Curiosity, in the colors you'd see if you were there.

I remember reading a science fiction story from the '60s or '70s that postulated blue sunrises and sunsets on Mars, complete with the reasons why.  At the time, I thought of that is the speculation of an author who probably wasn't all that well-informed about science.  There was plenty of that (and still is) in science fiction, but there were (and are) also plenty of authors who actually do have a good science background, or who are scientists.  Isaac Asimov is the canonical example of the latter, and he also wrote several hundred non-fiction books to popularize science...
Posted by Unknown at (permalink) 5:39 AM No comments:

The most successful scam evah!

The most successful scam evah!  I speak of the beauty industry, of course...
Posted by Unknown at (permalink) 5:33 AM No comments:

Integer overflow on BBC...  Interesting seeing a technical issue like this explained by non-technical people...
Posted by Unknown at (permalink) 5:32 AM No comments:

Paradise perambulations...  Yesterday afternoon we had sunshine with a few clouds in the sky; temperature was a beautiful 63° and the roads and pastures had dried out a bit.  All three dogs, Debbie and I took a walk of a mile or so up the dirt road that goes east from our home.  The views back to the west from the top were so nice – the lush greens of spring in farmland dominating.

Earlier in the day we had taken a drive up to Porcupine Reservoir, about 7 miles south of our home.  We wanted to see if the recent rains had raised its level, and they had.  But we also were treated to some other sights.  Flowers, especially lilacs and tulips, abounded in the yards of almost every home we passed.  Nearly all deciduous trees are now in leaf, and the sticks of winter are largely shrouded. 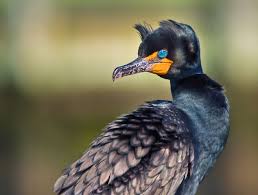 But the real treat was birds – lots and lots of birds!  Probably the most fun for me was sighting several common loons on the reservoir.  I knew they were present here in northern Utah, but I had no idea they were here in such number, or on Porcupine Reservoir.  That's very close to our home!  Also spotted on the reservoir: a new bird for me, the double-crested cormorant (at right, not my photo).  Away from the reservoir, we also spotted a single male lazuli bunting, a male American goldfinch, and several yellow warblers (most likely Wilson's, but we didn't get a good enough view for a positive ID).  Very nice!
Posted by Unknown at (permalink) 5:29 AM No comments: