I'm sure you've heard about this: Stacy Dash (an actress I'd never heard of before) recently tweeted her support for Mitt Romney.  From the response of our tolerant, peace-loving Progressives, you'd think she'd declared nuclear war on Big Bird, single-handedly clubbed every Harp Seal cub born this year, and personally sprayed DDT into every bird nest in North America.  The reason?  She's black.  According to the Progressive narrative, authentic blacks are Democrats, period, full stop.  Can't have them wandering off the plantation now, can we?

Listen to her reaction.  I cheered.

Curiosity: A Piece of Itself... 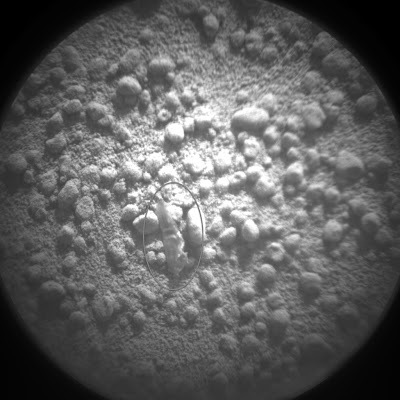 Scientists studying photos taken by Curiosity (currently working at Rocknest) noticed something odd a few days ago: a bright object of some sort right near the Martian rover.  The immediate suspicion was that something had fallen off the rover, and that might not be good.  So they directed the high-powered lens of the Chemcam to take a closer look (see circled object at right).  They've now concluded that it was some insignificant piece of plastic, such as cable insulation.  It doesn't appear to indicate any sort of problem at all.

While it proved to be most useful, I don't think that this sort of use was what they had in mind for Chemcam :-)
Posted by Unknown at (permalink) 5:20 AM No comments:

Paul Krugman is a Useful Idiot... 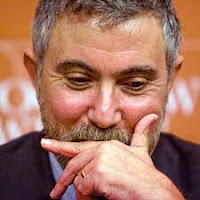 Useful to the Progressives, that is.  And yes, I know he won a Nobel Prize in Economics.  He's still an idiot.  Winning a Nobel Prize doesn't prevent either idiocy or assholery.  If you'd like some evidence for that, just look at the list of Nobel Peace Prize winners.

Anyway, John Hinderaker of PowerLine does a great job of spanking Paul Krugman, who shows every sign of desperately needing a good spanking...
Posted by Unknown at (permalink) 5:11 AM No comments:

The Day the Progressive Narrative Died?

It's too soon to declare that happy day, but here's a development that is at least quite interesting, and possibly an indicator of a sea change.  Lara Logan is a reporter for CBS News (a conventionally biased charter member of the lamestream media), and has evinced a decidedly Progressive viewpoint in the past.  Here, Logan is being reported on by Laura Washington of the Chicago Sun-Times – itself a cherished member of the lamestream media:


Logan stepped way out of the “objective,” journalistic role. The audience was riveted as she told of plowing through reams of documents, and interviewing John Allen, the top U.S. commander in Afghanistan; Afghan President Hamid Karzai, and a Taliban commander trained by al-Qaida. The Taliban and al-Qaida are teaming up and recruiting new terrorists to do us deadly harm, she reports.

She made a passionate case that our government is downplaying the strength of our enemies in Afghanistan and Pakistan, as a rationale of getting us out of the longest war. We have been lulled into believing that the perils are in the past: “You’re not listening to what the people who are fighting you say about this fight. In your arrogance, you think you write the script.”

Our enemies are writing the story, she suggests, and there’s no happy ending for us.

As a journalist, I was queasy. Reporters should tell the story, not be the story. As an American, I was frightened.

Logan even called for retribution for the recent terrorist killings of Christopher Stevens, the U.S. ambassador to Libya, and three other officials. The event is a harbinger of our vulnerability, she said. Logan hopes that America will “exact revenge and let the world know that the United States will not be attacked on its own soil. That its ambassadors will not be murdered, and that the United States will not stand by and do nothing about it.”

In the “good old days,” reporters did not advocate, crusade or call for revenge.

In these “new” days in a post-9/11 world, perhaps we need more reporters who are willing to break the rules.

What fascinates me the most about this story is that in two major media outlets, two reporters are drifting way off the Progressive narrative.  This is something not often seen.  Let's hope it's just the beginning...
Posted by Unknown at (permalink) 5:04 AM No comments: 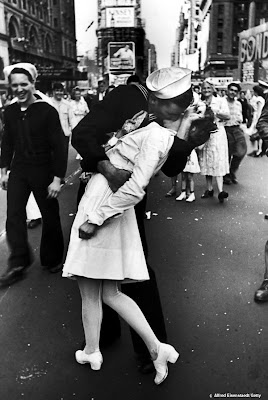 I trust that the vast majority of my readers will instantly recognize the iconic photo at right.  I'm certain that the first thought that photo brings to mind isn't “Rape!”.  Which just goes to show you that most of my readers aren't progressive feminists.

Over at Riehl World, they have a decidedly less progressive and more traditional perspective.  The comments are fun to read, but one of them jumped out at me, from Mike C.:

Let me frame what I’m about to say: I scored a 1520 out of 1600 on my SATs. My family and friends consider me a pretty smart guy with an extensive vocabulary. I run my own business in a field which requires top-notch writing skills, data management skills, critical-thinking skills, and a lot of creativity.

However, in this situation, profanity is the only appropriate response.

Perfect.
Posted by Unknown at (permalink) 4:45 AM No comments:

David Siegel is the founder and CEO of Westgate Resorts, a timeshare resort company.  He's a self-made multi-millionaire, and one of those folks quite insulted by Obama's “You didn't build that!” speech.  He recently wrote a letter to his employees, the conclusion of which I've reproduced below:


Business is at the heart of America and always has been. To restart it, you must stimulate business, not kill it. However, the power brokers in Washington believe redistributing wealth is the essential driver of the American economic engine. Nothing could be further from the truth and this is the type of change they want.

So where am I going with all this? It's quite simple. If any new taxes are levied on me, or my company, as our current President plans, I will have no choice but to reduce the size of this company. Rather than grow this company I will be forced to cut back. This means fewer jobs, less benefits and certainly less opportunity for everyone.

So, when you make your decision to vote, ask yourself, which candidate understands the economics of business ownership and who doesn't? Whose policies will endanger your job? Answer those questions and you should know who might be the one capable of protecting and saving your job. While the media wants to tell you to believe the "1 percenters" are bad, I'm telling you they are not. They create most of the jobs. If you lose your job, it won't be at the hands of the "1%"; it will be at the hands of a political hurricane that swept through this country.

You see, I can no longer support a system that penalizes the productive and gives to the unproductive. My motivation to work and to provide jobs will be destroyed, and with it, so will your opportunities. If that happens, you can find me in the Caribbean sitting on the beach, under a palm tree, retired, and with no employees to worry about.

Yes, this has been verified.  You can read the whole letter and the backstory on Gawker...
Posted by Unknown at (permalink) 4:36 AM No comments:

No Demonstration at Benghazi Before the Attack?!?

The U.S. State Department is now denying that it ever thought there had been a demonstration about the anti-Islamic movie prior to the attack on our Benghazi consulate that killed four Americans.

What kind of game is being played here?

The first thing that came to my mind is that Hillary Clinton is yanking the rug out from under Obama – first he blames the Benghazi attacks on that stupid movie for weeks, then she says her department knew better all along.  Is this actually true?  If so, then some State Department folks never got the word, because they initially backed Obama's take.  Or is Hillary seeing the political problem, and distancing herself from it in order to better position herself for a 2016 run?  Or is she just being spiteful?

I don't know any of these things, of course – just all random thoughts that came to mind after reading this extraordinary statement.

Of course, another perfectly reasonable interpretation is that our government is run by a bunch of incompetent clowns.  But we know better than that, don't we?  Don't we???
Posted by Unknown at (permalink) 4:31 AM No comments:

Extraordinary and beautiful artifacts of nature, produced by dolphins, whales, and volcanoes...

Peggy Noonan has a wonderful blog post, too short to excerpt:


A friend in Texas told me of some local difficulties in getting big Romney lawn signs. Its possible there’s been a run on those signs since the first debate, and maybe local GOP organizations are running out. You know what Romney supporters who cant find lawn signs should do? Put an empty chair on the lawn instead. Just one big empty chair. Says it all. Says it better.

Yes!
Posted by Unknown at (permalink) 4:23 AM No comments: 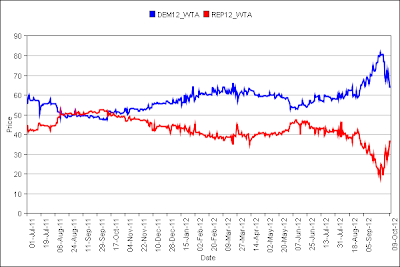 I'm fascinated that the market is holding such a large lead for Obama.  I wonder what information those investors are using to come to that conclusion?