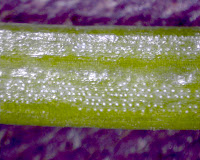 At right is a 100x view of part of one needle from a Noble Fir (our Christmas tree this year). I'm guessing that those white spots are where the waxy and odiferous stuff exudes. 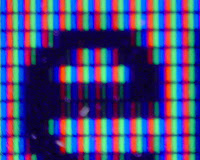 At left is a 100x view of my LCD screen, showing part of a letter ‘e’. If you look carefully, you can see that there are rows and columns. If you look in one row, you can see that each group of three stripes is the same width as the row is high – each of these groups is one pixel. Each pixel contains one red stripe, one green stripe, and one blue stripe. By adjusting the brightnesses of each of these colors, the pixel (viewed at a distance by our naked eye) appears to be a color that is the combination of these three colors (this is the “RGB”, or red/green/blue you may have heard of). To my eye, that ‘e’ appears to be black on a white background – but it sure doesn't look like that in a magnified view!

Posted by Unknown at (permalink) 11:21 AM No comments:

Via my mom, the incurable romantic:

A man and a woman who had never met before, and were both married to other people, found themselves assigned to the same sleeping room on a Trans-continental train.

Though initially embarrassed and uneasy over sharing a room, they were both very tired and fell asleep quickly..... He in the upper bunk and she in the lower.

At 1:00 AM, the man leaned down and gently woke the woman saying, 'Ma'am, I'm sorry to bother you, but would you be willing to reach into the closet to get me asecond blanket? I'm awfully cold'.

'I have a better idea,' she replied. 'Just for tonight, let's pretend that we're married.'

'Good,' she replied. 'Get your own damn blanket.'

After a moment of silence, he farted.

Posted by Unknown at (permalink) 8:09 AM No comments:

From Scott Adams (the cartoonist who creates Dilbert):

I'm sure many of you readers are ahead of me on this story. Eventually I realized her head was on the other side of her body, exactly where it belonged. I had been snuggling my face into my dog's ass.

Been there, done that... 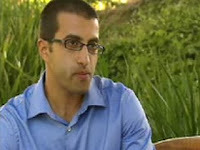 Jonathan Hunt is a reporter for Fox News. Mosab Hassan Yousef (at right) is the son of an imprisoned Hamas leader. Yousef has renounced Islam, converted to Christianity, and is currently living in the San Diego area. He agreed to be interviewed by Fox News, and the whole thing is well worth reading. This quote jumped out at me:

JONATHAN HUNT: Do you believe that Israel can ever strike a peace deal with Hamas?

Yousef is a well-informed Palestinian who says the same thing on this topic that large numbers of Palestinians say. Michael Totten's reports from the area have been most informative on this subject; it's clear that this sentiment is the norm amongst Palestians (and also much more widely, amongst the Muslim world). But Yousef is on the mainstream media, and those other Palestinians are not – so it's interesting to see this notion in the light.

This is the issue that Israel has been living with since the day they were founded, just over 60 years ago. They are completely surrounded by an implacable enemy who openly declares their objective: to wipe Israel off the map, to kill all the Jews.

Yousef is right. There will be no lasting “peace deal” with Hamas, Fatah, or any other organization of Palesistians.

But that is not the same thing as saying there can be no peace. The world has learned this lesson so very many times, and yet still many reject it. Consider: on January 3, 1941 there was no peace deal to be had with the Emperor of Japan, or with Adolf Hitler. And yet now we are at peace with their nations – even more, we count them amongst our close allies. How did this happen? Did we have discussions? Did the U.N. issue an edict? Did we make “proportionate” military responses to their attacks? Did the Secretary of State send a strongly worded letter?

Of course not. We defeated these countries militarily. We used politically sanctioned violence to forcibly take away their ability to harm us. We fought a war in which millions of civilians were killed, along with tens of thousands of American soldiers. We fought with resolve and desperation and a level of violence nearly unimaginable today.

Personally, I'm rooting for the Israelis. I hope they have the balls to finish the job in Gaza – that would make a great start...

Posted by Unknown at (permalink) 4:43 AM No comments: