Amazing battery lifetime...  I got my new iMac Pro in the last week of December, roughly six weeks ago.  It came with a wireless keyboard and mouse that incorporate built-in rechargeable batteries, much like a smartphone has.  My old mouse used ordinary AA batteries, which I typically had to change every 3 weeks or so.  My old keyboard plugged into USB and had no batteries at all.
So one of my first questions about these new-fangled peripherals was: just how long would these batteries last on a charge?

Well, I now have the answer for one of them, the mouse.  I recharged it last night for the first time since I received the system, when it reported being at 5% of charge.  My keyboard is still at 70% of charge, after six weeks of frequent use.

For approximately the 37 billionth time, I am just in awe of the degree of advancement in a technology, within my own lifetime.  Rechargeable batteries were basically non-existent when I was a kid.  The standard was old-fashioned zinc-acid batteries, which are actually quite difficult to buy today – alkaline batteries have basically taken over the disposable battery scene, with capacities several times that of a zinc-acid battery.

The most significant advances aren't in the batteries, though – they're in the incredibly low power consumption of even fairly sophisticated circuits like a Bluetooth optical mouse.  That's truly mind-boggling.  The simple, inexpensive optical mouse on my desk has functionality that was either impossible (Bluetooth) or really difficult (the optical movement sensing).  The latter alone would have taken a roomful of circuitry in the '50s, dominated by power-hungry vacuum tubes.  A wild guess at the power consumption would be 5 to 10 thousand watts.  My modern mouse can't consume more than a few thousandths of a watt at most.  More likely it's an order of magnitude less than that.

And now we have an electric car headed to the asteroid belt!  :)
Posted by Unknown at (permalink) 1:06 PM No comments:

The weather was nice enough...

The weather was nice enough ... that Debbie and I got to take a little walk this morning, with Race and Miki.  When we were getting ready to depart, the dogs had no idea we were about to go for a walk.  But when I picked up the leashes, Race immediately knew – even though it's been several months since he last got to go on a walk with us.  Happy dogs!  The temperature was quite warm for a February morning: 46°F.  The scenery was beautiful, too.  The foreground is a bit drab without our usual greenery, but the snow-capped mountains made up for that.

Incidentally, both of these photos were taken with a hand-held iPhone X.  The second photo is using the 2x optical telephoto.  Both would look much worse without the image stabilization... 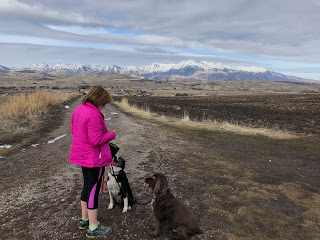 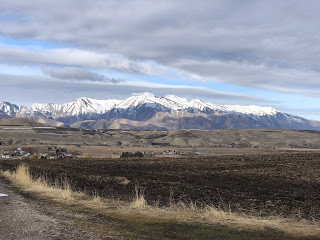 Posted by Unknown at (permalink) 11:42 AM No comments: