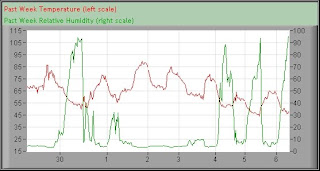 We're having a spell of absolutely lovely weather – cool, crisp, and (by our standards) positively wet air.  No rain, though the forecast holds some possibility of it.

This morning walking the dogs (at 3 am!) was particularly nice.  A light haze blanketed the ground, but it was perfectly clear overhead.  The near-full moon brightly illuminated the yard, making it easy for Race (our border collie) to run around the yard chasing a stick I threw repeatedly.  There's nothing that makes that dog happier than simply chasing that stick...
Posted by Unknown at (permalink) 4:32 AM No comments:

Marines and the President...

My mom sent a link to this video, which has been floating around for a while.  I refrained from posting it when it initially came out because there was much criticism of the careful and obviously biased (for George W. Bush) editing.

However, since that time I have corresponded with a fair number of our warriors in both Iraq and Afghanistan.  Their comments lead me to believe that this video is a fairer portrayal of our military's attitudes than the critics would have us believe.

So here's the video, and you can make up your own mind about an appropriate reaction:

Via my mom, who thought I'd enjoy the naval-themed humor...


...and she was right, for it captures rather nicely the amazing arrogance of some (certainly not all) naval officers...
Posted by Unknown at (permalink) 4:19 AM No comments:

A Doctor's Take on Healthcare Reform...

Dr. Simi Lyss is a regular reader of this site, and is a medical doctor.  He has this editorial in his local paper, and I reproduce it here at his invitation:


I agree that reform in health care is necessary at this time. However the proposals that are being presented by our government, I believe, are a total disaster.

I have downloaded and tried to read the proposals before Congress. I have found, after several hours of reading, that they are totally incomprehensible. Continual reference is made to previous statutes and regulations that are not reasonably accessible to any reasonable person. Not a big surprise because the document is more than 1,000 pages long!

Who wrote this proposal? Clearly not our legislators. I don't know but it was almost certainly a number of “policy wonks” who may or may not reside in the real world most of us live in.

The proposals seem very similar to the systems that significant countries, such as Canada and Great Britain, currently have with all their problems we already know about.

So, where should we go from here?

While our medical care system has a large number of problems, many could be made better by the following suggestions:

1) True malpractice reform. Let's not try a demonstration project as President Obama suggests. Let's try a system like, for example, the one that Texas has already instituted. It has very significantly lowered the costs and distortions caused by a runaway malpractice system. These reforms should be instituted nationally.

2) Allow insurance companies to sell their insurance across state lines. This would increase competition in a dramatic way that would benefit all of us with better coverage and lower premiums.

3) Eliminate the ridiculous provision in our tax laws that says deductions for out of pocket medical expenses must exceed 7.5 percent of our “Adjusted Gross Income” before being deductible from our income. How would you react to a rule that said you could only deduct mortgage interest that was above 7.5 percent of your AGI? How is this so different?

These actions are certainly not all we need to do but they are important first steps. However, lets not throw out our whole system which works fairly well for at least 85 percent of people who are asked. Let's not try to help the 15 percent by going to an untried idealistic system that is likely to be a disaster for us all.


For what it's worth, all of the MDs I know are unhappy with Obamacare and all the multitude of proposals coming out of Congress.  By and large, they agree with Dr. Lyss' on the elements of healthcare that most need reform.
Posted by Unknown at (permalink) 4:07 AM 1 comment: