Paradise ponders...  Yesterday a neighbor (Alan L.) asked if he and two of his boys could come over to use the woodworking tools in my shop to help them with their “pinewood derby” cars.  His younger boy (Nic) needed his for his scouts; the older boy (Zac) was doing it just for fun.  Both of them needed to cut the rectangular blocks that came with their kits into a slightly more curvy shape.  Nic had an ambitiously complex shape in mind; Zac wanted a simple wedge with a slight curve. 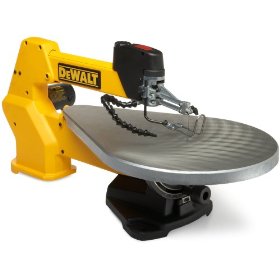 The right tool for both of them was a power coping saw.  I have the same model as the one pictured at right.

Nic is about 11 years old, and has little experience with power tools (or tools in general, for that matter), so this is a good choice for its simplicity and relative safety, too.  We gave him a bit of instruction on the proper use of the saw, and let him practice on a piece of scrap wood.  He did fine during practice, and his “real” cuts on the block of pine that came with his kit were darned near perfect.

Zac is a couple years older, and a lot more confident (though not necessarily justifiably :) than Nic.  His design was also much simpler, and he cut his block without any issues at all.

I'm hoping Alan will share some photos with me; if he does I'll post them.  He is a photographer and web designer by trade, and his camera was clicking away like mad all evening :)
Posted by Unknown at (permalink) 9:21 AM 1 comment:

Oh, that quaint little notion called “the rule of law”...

Oh, that quaint little notion called “the rule of law”...  It's what keeps American citizens from being arbitrarily abused by the powerful ... or by mobs.  No matter who you are, the rule of law promises, the law will apply to you just as it does to any other citizen.

We've never been a perfect example of the rule of law here.  Corruption is a big problem, though it's subtler and less widespread here than in many other places.  The rich and powerful can always find ways to use their money or their influence to help themselves or those they favor.  Nevertheless, it's generally true here that if someone breaks the law, they're going to be charged, prosecuted, and convicted by a jury.

That last step – conviction by a jury – is subject to various kinds of manipulation, though.  Lawyers for defendants will try mightily to influence the jurors decision-making process, even if the conclusion desired doesn't follow the law.  There's even a name for this: jury nullification.  It's very controversial amongst legal academics, as it is an overt violation of the rule of law.  Jury nullification has a long history, many proponents, and some of its historical outcomes would be widely seen today as acceptable and even desirable.  And yet ... it's a clear violation of our vaunted rule of law.

I don't have a clear position on the idea of jury nullification.  Both sides of the argument have compelling points, both pro and con.

Friend and former colleague Tim B. passed along an article detailing a current attempt at jury nullification (though the article doesn't mention that!).  Anyone who believes that anthropogenic global warming (AGW) is about to bake the planet will most likely find this effort laudable.  Those of us who (like me) think that AGW is a gigantic fraud will likely find this to be a lamentable potential lapse in the rule of law.

I hate the idea that a mob of AGW supporters could stop completely legal development of energy resources.  But I'm not ready to condemn jury nullification...
Posted by Unknown at (permalink) 4:48 AM No comments: