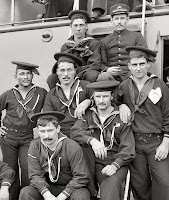 
There's an old sea story about a ship's Captain who inspected his sailors, and afterward told the first mate that his men smelled bad.

The Captain suggested perhaps it would help if the sailors would change underwear occasionally.

THE MORAL OF THE STORY:

Someone may come along and promise"Change", but don't count on things smelling any better.

Posted by Unknown at (permalink) 7:17 AM No comments:

Get Your Free Web Fonts...

...to a more deserving guy:

Following the embarrassing news that Mayor Dave Bing’s GMC Yukon was hijacked by criminals this week, Detroit’s Channel 7 reports that the Reverend’s Caddy Escalade SUV was stolen and stripped of its wheels while he was in town last weekend with the UAW’s militant President Bob King leading the “Jobs, Justice, and Peace” march promoting government-funded green jobs.

Read that again: Jackson’s Caddy SUV was stripped while he was in town promoting green jobs.

Add Jesse to the Al Gore-Tom Friedman-Barack Obama School of Environmental Hypocrisy. While preaching to Americans that they need to cram their families into hybrid Priuses to go shopping for compact fluorescent light bulbs to save the planet, they themselves continue to live large.

“We need an economy that creates employment that can't be shipped overseas,” the Green Rev wrote for CNN about the march. “Home-grown American labor will be installing windmills and solar panels. A green economy is not an abstract concept.”

Well, its certainly abstract to Jesse, but I digress.

“Even now, the only sector of the economy that has seen job growth during the recession is the green job sector. Time is of the essence.”

Actually, time long ago passed Detroit by because Jesse’ favored government mpg mandates and UAW wages stripped the Big Three’s ability to compete against non-union transplants. These jobs were real – unlike the artificial, government subsidized green jobs he shakes down the feds for today.

Real jobs produced big, profitable SUVs like the one Jesse prefers to ride in. His SUV has been stripped by thugs – a fitting metaphor for what Jesse and his pals have done to the auto industry for the last 35 years.

Posted by Unknown at (permalink) 7:06 AM No comments: