California Towhee Nest on Our Patio... 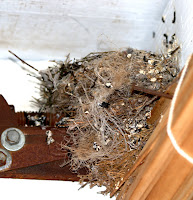 For years our covered patio has been a favorite place for our local California towhees (Pipilo crissalis) to raise their families.  These are one of the most common birds around our home, along with Lesser Goldfinches, House Finches, and the various hummingbirds.  The nest shown at right presently occupies a corner formed by a roof rafter and a joist, just under the roofing boards, in the northeast corner of our patio.  We've had about six or eight nests this year, and many of the towhees and finches are raising multiple broods.  It's a good year for the birds, with lots of food around because of our rains this year...
Posted by Unknown at (permalink) 8:18 AM No comments:

An Assortment of Wildflowers...

Now here's a bunch more from our trip yesterday.  We haven't identified any of these yet.  If you know what any of these are, please let us know in the comments.  As usual, click any image for an enlarged view... 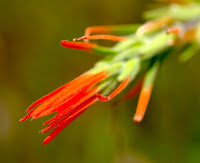 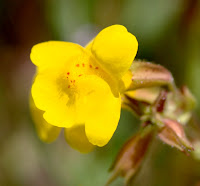 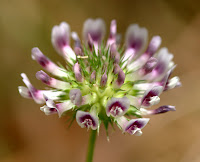 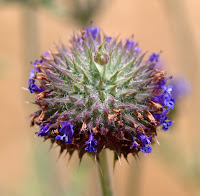 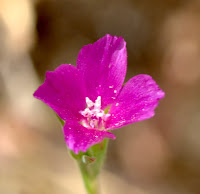 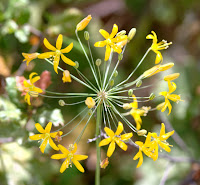 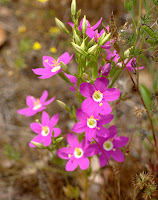 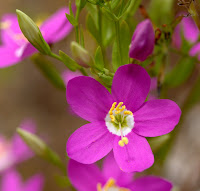 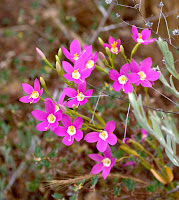 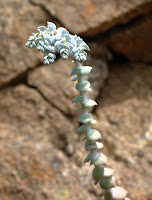 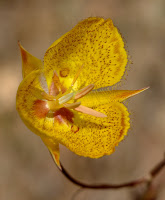 The Mariposa Lily (Calochortus luteus) is a flower we see more often on the eastern (desert-facing) slopes of our local mountains, and down in the Anza-Borrego desert itself.  Yesterday we saw just a few of them on our trip along the western flanks of Cuyamaca Mountain, but those few were simply spectacular.  I've never seen Mariposa Lillies with so many red spots and hairs on the petals.  Click the image to get a large view for the full effect...
Posted by Unknown at (permalink) 8:00 AM No comments: 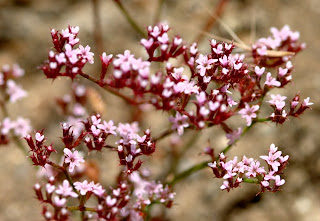 This year the pink spineflowers (Chorizanthe breweri) are more common in our chaparral hillsides than we've ever seen.  They seem to especially like small exposed areas on southern-facing slopes.  In places they make pink patches up to 100' or so in diameter that can be seen a mile or more away.  The flowers themselves are tiny - only about 1/8" in diameter.  Both the flowers and the stems contribute to the color as seen at a distance.  We saw these everywhere we went yesterday, but the best patches of all were very close to home, on the eastern flanks of Lawson Peak and Gaskill Peak, as we drove past Barrett Lake on Lyons Valley Road.  Some of those patches looked almost as if someone had accidentally left a pink picnic cloth lying on the ground...
Posted by Unknown at (permalink) 7:52 AM No comments:

Water in the Desert...

The roads we travelled yesterday are basically in the desert, and usually we don't see a single drop of water.  But yesterday many of the intermittent streams were running, in some cases strongly.  These photos are of a particularly pretty stream near where our road crossed it.  It was very pleasant to walk around the cold, splashing stream right in the middle of the warm desert.  Debbie stayed up on the road, as she doesn't like the idea of falling into the stream :-) ...

We saw many of these larkspur on our trip yesterday, usually in shaded areas.  There are many Delphinium species in the chaparral, both blue and red, and I didn't try to identify these... 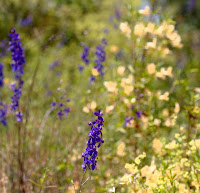 One of the prominent members of the chaparral flora are various grasses, dozens of different species.  Many of these grow briefly in the spring, then go to seed and turn brown.  Entire mountainsides turn from green to brown early each summer, providing a classic California vista.  In large parts of the chaparral, the grasses grow in relatively small meadows, or along road cuts (or natural rocky breaks), etc.  While on our trip yesterday, we spotted several fine examples.  I've not even tried to identify these...

Chamise (Adenostoma fasciculatum) is one of the most common plants in our local chaparral.  Most of the year it's basically an ugly looking pile of fragile dry sticks, and it burns like gasoline in our fires.  But briefly each spring it can actually be quite beautiful, I'll grudgingly admit.  This year the bloom is particularly profuse, presumably because of the normalish rains.  Here's some we saw on our trip yesterday.  I particularly like the dangling branches against the rock wall... 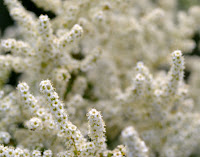 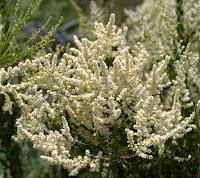 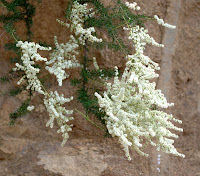 Posted by Unknown at (permalink) 7:10 AM No comments:

Yesterday Debbie and I did a little four-wheeling, down Boulder Creek Road and a side road we discovered a couple years ago.  The altitude varies from about 3000' to almost 5000' along these roads.  To our great surprise we found abundant wildflowers at every altitude – very unusual for this late in the year, especially at the lower elevations.  So far this year has been basically at the 100 year average for rainfall, but quite a bit cooler than average.  The combination of normal rainfall (instead of drought) and cooler temperatures must account for the late season.  But whatever the cause, we enjoyed the scenery!

The photos here are of one of my favorite natives: Mimulus clevelandii, commonly known as monkey flower (supposedly the flower looks like a grinning monkey's head, but I don't see the resemblance).  We have several of these growing in our yard, but the ones we saw today at higher altitudes were much more beautiful.  As usual, click to enlarge... 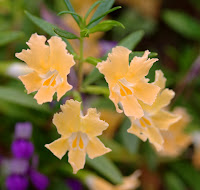 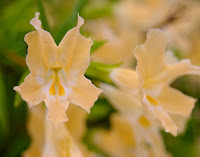 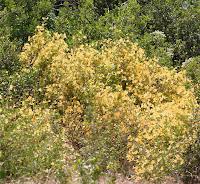 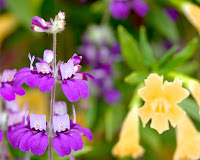 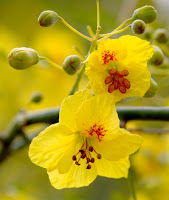 Our Palo Verde tree is exploding with bloom and new growth.  At the rate it's going, it's going to dominate our yard in about 7 weeks (or maybe a bit longer).  Click to enlarge...
Posted by Unknown at (permalink) 6:34 AM No comments:

Commercial of the Day...

Labels: Commercial of the Day

I haven't tried Zenni Optical (yet) – it was referred to me by a friend-of-a-friend.  Their prices are amazingly low, especially for frames...
Posted by Unknown at (permalink) 6:28 AM 1 comment: