Chocolate Cake and the Veterinarian...

Yesterday Debbie baked a beautiful chocolate cake.  She does quite a bit of cooking, but cakes are not something she makes often, so this was a bit of an unusual event.  It was also something I was quite looking forward to, as I really love a good chocolate cake (with a glass of milk!).

I was in a business meeting around 3 pm when my cell phone started buzzing.  It was a text message from Debbie (unusual in and of itself).  It said:


It all started with a chocolate cake - which Race got hold of!  I'm at the vet's...

After Debbie baked the cake, she pushed it way back on our kitchen counter to cool off.  She then ran some errands down in town.  When she came home, she saw that almost half the cake (a big, two-layer affair) had been eaten.  There were four dogs who might have been the culprit, but really only one was likely to have been able to reach it: Race (our young border collie), who could quite easily jump up onto the kitchen cabinets.  Just to be sure, Debbie took a whiff of all four dog's breaths – and sure enough, only Race's breath smelled of chocolate.

Oh, oh.  Dogs can be (and, unfortunately, often are) poisoned by eating chocolate.  Debbie and I both knew this, so she immediately called our vet (the wonderful Dr. Christine Wilson at the Steele Canyon Veterinary Clinic).  The folks there asked about how much chocolate Race had eaten, and after hearing “half a cake” said “Bring him in!”  They induced vomiting to get rid of any undigested cake, put him on a cottage cheese and rice diet for several days, and declared him undamaged.  Whew!

Debbie salvaged almost half the lovely cake, by cutting off the gnawed part.  It was quite good!
Posted by Unknown at (permalink) 4:10 AM No comments: 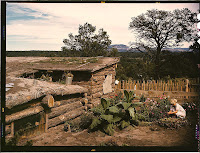 Fascinating collection of early color photos taken in the U.S.   The photo at right is of the home of Jack Whinery, a homesteader in Pie Town, New Mexico, in 1940.
Posted by Unknown at (permalink) 3:53 AM No comments: