Are you a liberal, a conservative, or a redneck?  Here is a little test that will help you decide:


You're walking down a deserted street with your wife and two small children. Suddenly, an Islamic terrorist with a huge knife comes around the corner, locks eyes with you, screams obscenities, praises Allah, raises the knife, and charges at you.  You are carrying a Glock 40, and you are an expert shot. You have mere seconds before he reaches you and your family.


Well, that's not enough information to answer the question! Does the man look poor! Or oppressed? Have I ever done anything to him that would inspire him to attack? Could we run away? What does my wife think? What about the kids?Could I possibly swing the gun like a club and knock the knife out of his hand? What does the law say about this situation? Does the Glock have appropriate safety built into it? Why am I carrying a loaded gun anyway, and what kind of message does this send to society and to my children? Is it possible he'd be happy with just killing me? Does he definitely want to kill me, or would he be content just to wound me? If I were to grab his knees and hold on, could my family get away while he was stabbing me? Should I call 9-1-1? Why is this street so deserted?  We need to raise taxes, have a paint and weed day and make this a happier, healthier street that would discourage such behavior. This is all so confusing! I need to discuss with some friends over a latte and try to come to a consensus.

Can you believe this?  My own mother tortures me with an absolutely awful Halloween-themed pun:


A man is walking home   alone late one foggy Halloween night,  when behind him he hears:

Posted by Unknown at (permalink) 4:31 AM No comments:

Labels: Humor, I Told You So, Puns

The folks at Repair California issued a press release yesterday.  It starts:


Today, Repair California, a group of everyday Californians, reformers and advocacy groups turned in ballot language to call the first Constitutional Convention in California in more than 130 years.  Citing a broken system of governance, the measures would call a limited Constitutional Convention to reform four areas of the constitution: the budget process; the election and initiative process; restoring the balance of power between the state and local governments; and, creating new systems to improve government effectiveness.  The Convention is specifically prohibited from proposing tax increases or from considering changes to social issues such as marriage, abortion, gambling, affirmative action, freedom of the press, freedom of religion, immigration, or the death penalty.  Voters will decide on calling the Convention on the November 2010 ballot, the Convention would be held in 2011 and its proposed reforms would require voter approval in one of the three scheduled statewide elections in 2012.

Besides, it sounds like a huge amount of fun – with one action, we can irk and irritate every parasitical special interest, every public sector union, and (best of all!) every insincere, posturing politician in Sacremento.

Woo hoo!
Posted by Unknown at (permalink) 4:23 AM No comments: 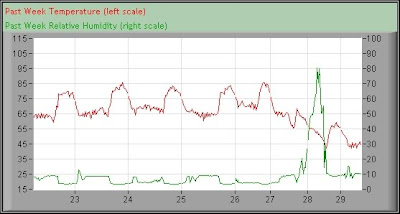 But it won't be with us for long, says the forecast.

Not that the forecast is actually reliable or anything...
Posted by Unknown at (permalink) 4:10 AM No comments: