Paradise ponders...  Another busy day – this is starting to feel like a habit!

I got the wiring all finished in our sun room, except that I could not mount the light fixtures as I had planned.  The way the fixtures are constructed I would not be able to take them down for painting, then put them back up later (unless I were to buy 6 more toggle bolts!).  So the lights are all wired up and ready to go, the circuit is tested, but they won't actually go up until next week after the painters finish.  After I got the wiring done I spent the rest of the day cleaning up in the sun room and mud room, getting ready for the flooring guys who are due tomorrow morning.

Our construction guys were here all day today, starting at around 7:30 am when a big load of lumber showed up: 8x8s and lots of redwood planks.  With the 8x8s in hand, the framing underneath the deck went up in a big hurry – the crew of three was all finished by about 1 pm!  I took that last photo just a few minutes ago, shortly before they knocked off for the day.  Tomorrow they'll be back to put the actual deck on, then comes the roof.  Progress! 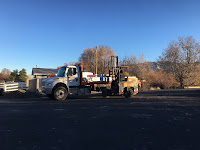 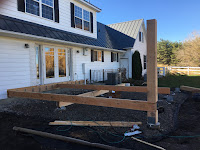 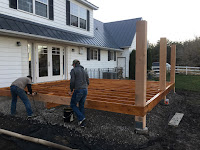 In the afternoon our fencing guys showed up.  They're hoping to finish up cutting all the panels and building gates by Saturday, then early next week they'll screw them all into place.  They believe they'll be done by Tuesday or Wednesday.  The part they've finished so far looks glorious by comparison with what it's replacing; it will provide us with a nicely secure dog yard.

In the late afternoon, the wallboard repair guy finished the fix-it job to the wallboard I mangled in our laundry room.  It's almost like magic the way these guys can make damage like that just disappear.  Once that texturing is dry, I'll slap a coat of paint on it and nobody will know how I butchered that wall and ceiling!
Posted by Unknown at (permalink) 4:27 PM No comments:

Betsy, RIP...  Our smooth-coat border collie, Race, was one of Betsy's puppies.  Betsy belonged to a breeder (Angie) in eastern Oregon, and she was the mother of a line of puppies that have been stars, including in agility.  In memory of Betsy, owners of her puppies are each writing stories about their dog, and they're all going to be collected to send to Angie.  Here's the one we wrote for Race:


Betsy's son Race lives with us today in northern Utah, along with three field spaniels and a ridiculously large collection of cats.  When he first came into our lives, we lived in the mountains of Southern California, not far from the Mexican border.  We drove from there up to eastern Oregon to pick Race up, and he had our hearts from the first moments we saw him.  He was terrified at first - scary new people, strange brown dogs that were so slow, and lots of these funny-smelling things called cats.  It took a few weeks for him to really settle into our household, but settle he did.  It wasn't long before we'd often find Race in a pile with other dogs and cats, and he joined in the play along with all the others.

Debbie trained him to run agility, and the two of them were doing wonderfully until one day four years ago when Race slammed into Debbie's knee.  She was badly injured (a tibia plateau fracture) and took many months to recover to the point where she could run agility again.  Race was the proximate cause of the injury, but it really wasn't his fault - we could hardly hold him to blame for doing his very best in exactly what he was being trained for.  But the risk for Debbie was too high, so we decided that she wouldn't run him in agility any more.  That means Race became "just" a companion, but oh what a companion that boy has been!

Visitors to our home always marvel at Race's never-ending desire for play, especially to chase and retrieve something thrown.  It doesn't matter to him what you through: a ball, a pine cone, or even a stone are all equally fun for him.  He takes such joy in the chase, the catch, and the return - and you'll tire of it long before he does.  He's been great with visitors, including kids, once he's sure they're not threats.  While Race is making up his mind about that, though, it's best not to get too close.  If anyone ever invaded our home (or our car) while Race was on guard, they'd have some mighty fast teeth and claws to contend with!

These days, of course, Race is an adult dog (eight and a half years old).  His constant canine companion is Miki, our ten year old field spaniel.  The two of them share a special contempt for our field spaniel puppies, Mako and Cabo - while occasionally condescending to play with them, too.  Besides chasing thrown things, Race's favorite activities include riding with us on four-wheeling trips, walks through the country around our home, and swimming.  Our field spaniels are supposed to be water-loving dogs, but we have trouble getting them into a stream or pond.  Race, on the other hand, goes completely bonkers anytime he figures out that he's about to go swimming.  He loves to bark and snap at moving water (as in a stream), and to fetch sticks thrown into a pond.

This morning as I had my tea and toast while reading the (depressing) election news, I felt something worming its way under my left elbow and into my lap.  When I looked down, two big brown eyes were looking at me - and then flicking over to my buttered toast - and then back to my face.  When I took a bite from my toast, there was a little piteous whimper from below, and a little drool.  His tail was wagging furiously the entire time, of course.  I did manage to keep a little toast for myself. :)

Dog people understand us completely when we say that we think of Race and our other dogs as our children.  Others think we're crazy, and they may be right about that.  It's our great privilege to have Race as part of our lives, and we're grateful for him every single day.  Even when he eats our toast.  Especially when he eats our toast...


Posted by Unknown at (permalink) 4:17 PM No comments:

Paradise ponders...  Another busy day yesterday.  The roofing/siding guys are finished except for a piece of fascia and a little trim; they have to bend these things up and then install them, hopefully before Friday.  We heard from our builder that our painters should be here next Tuesday to do several things: the exterior of the mud room, the interiors of both the mud room and the sun room, and the framing that will underlie our new deck.  They might also be able to paint the repaired drywall in our laundry room – repairs on that started yesterday and will allegedly be done by Friday.  The builders were still waiting on lumber, which was supposed to show up yesterday but did not.  Our fence guys showed up and cut another 10 or so panels, including some of the more challenging ones where the fence is on a slope.  That fence is going to look great when they're finished!

In between dealing with all the contractors I spent the day working on the final electrical work in the sun room.  In addition to the outlets, I got the lighting switch installed, one of the three lights almost finished.  That leaves me with two lights to go, and then I can move on into the mud room.  The siding is now finished around all my lighting plaques, so I can do the final wiring on the entire thing.

Our flooring contractor called yesterday to let us know that our tile would be arriving one day late – so they moved their installation schedule from Thursday/Friday to Friday/Saturday (tomorrow and the next day).  The mud room and sun room will look much different after that!

I forgot to mention yesterday that on Tuesday night we took Cabo to her first night at her new puppy class.  This one is held in Logan, much easier for us to get to.  One of the things we trained for was really basic leashed walking, something both of the puppies are really bad at (they pull like little bulldozers).  The instructor gave us some simple techniques for that training ... and within one lesson we see definite progress.  That's the good news.  The bad news?  I can only train one puppy at a time this way, so our walks will now have to be with individual dogs.  Lots of walks!  I did a bit of practice on this yesterday with both puppies, and saw definite progress.  Cabo is picking this stuff up much faster than Mako; she seems to be the smart one of the bunch.

Yesterday afternoon I had an appointment with the insurance agent who handles our health insurance.  He was very sympathetic, and said that he's running into this giant rate increase with most of his clients who are between about 55 and 65 years old.  If Trump really does repeal ObamaCare, the burden may be considerably eased starting in 2018, but for next year the high rates are pretty much locked in.  We went over all our alternatives, and the best option we could identify was to switch from our current carrier (SelectMed) to the local Blue Cross/Blue Shield (called Regence) carrier, and at the same time switch to a lower-tier plan.  The lower-tier plan will cost about the same as the plan we have this year (about $1,400 a month), saving over $1,000 a month in premium.  The coverage is about the same as our current plan, but the out-of-pocket maximum is much higher.  The best feature of this plan from our perspective is a much better network, one that includes every facility and doctor that Debbie is using.  Our current plan doesn't cover her physical therapy facility, for example – even though it's the only one in Cache Valley that has the equipment she needs.  If by some miracle we don't actually get near our out-of-pocket maximum, we'll actually save some money with this plan.  If we do hit our out-of-pocket maximum, the total cost will be about the same as the higher tier plan.

The possibility (probability?) that ObamaCare will be repealed is a very disruptive threat hanging over the entire healthcare industry right now, including health insurance.  I don't mean that it will necessarily be a bad disruption.  But right at the moment, with no idea what would replace ObamaCare as a regulatory framework, the industry has no idea how to invest in their future.  That uncertainty trickles down in lots of ways that people might not think about, from the economic opportunity (or lack thereof) in drug research investment to the wisdom of acquiring another treadmill in a physical therapy facility.  It will be best for the industry if the government can move very quickly to repeal and replace ObamaCare.  This is one of those times when making the decision quickly is more important than making the decision optimally (and this happens quite often in business).  Moving quickly is not a notable feature of our federal government, however...
Posted by Unknown at (permalink) 5:59 AM No comments: