Jim M. passes along this parable:

Barack Obama discovers a leak under his sink, so he calls Joe the Plumber to
come and fix it.

Joe drives to Obama's house, which is located in a very nice neighborhood
and where it's clear that all the residents make more than $250,000 per
year.

Joe arrives and takes his tools into the house. Joe is led to the room that
contains the leaky pipe under a sink. Joe assesses the problem and tells
Obama, who is standing near the door, that it's an easy repair that will
take less than 10 minutes.

Obama asks Joe how much it will cost.

"Yes, but what I do is charge a lot more to my clients who make more than
$250,000 per year so I can fix the plumbing of everybody who makes less than
that for free," explains Joe. "It's always been my philosophy. As a matter
of fact, I lobbied government to pass this philosophy as law, and it did
pass earlier this year, so now *all* plumbers have to do business this way.
It's known as 'Joe's Fair Plumbing Act of 2008.' Surprised you haven't heard
of it, senator."

In spite of that, Obama tells Joe there's no way he's paying that much for a
small plumbing repair, so Joe leaves.

Obama spends the next hour flipping through the phone book looking for
another plumber, but he finds that all other plumbing businesses listed have
gone out of business. Not wanting to pay Joe's price, Obama does nothing.

The leak under Obama's sink goes unrepaired for the next several days.

A week later the leak is so bad that Obama has had to put a bucket under the
sink. The bucket fills up quickly and has to be emptied every hour, and
there's a risk that the room will flood, so Obama calls Joe and pleads with
him to return.

Joe explains the reason for the dramatic increase. "Well, because of the
'Joe's Fair Plumbing Act,' a lot of rich people are learning how to fix
their own plumbing, so there are fewer of you paying for all the free
plumbing I'm doing for the people who make less than $250,000. As a result,
the rate I have to charge my wealthy paying customers rises every day.

"Not only that, but for some reason the demand for plumbing work from the
group of people who get it for free has skyrocketed, and there's a long
waiting list of those who need repairs. This has put a lot of my fellow
plumbers out of business, and they're not being replaced – nobody is going
into the plumbing business because they know they won't make any money. I'm
hurting now too – all thanks to greedy rich people like you who won't pay
their fair share."

Obama tries to straighten out the plumber: "Of course you're hurting, Joe!
Don't you get it? If all the rich people learn how to fix their own plumbing
and you refuse to charge the poorer people for your services, you'll be
broke, and then what will you do?"

Posted by Unknown at (permalink) 11:55 AM No comments: 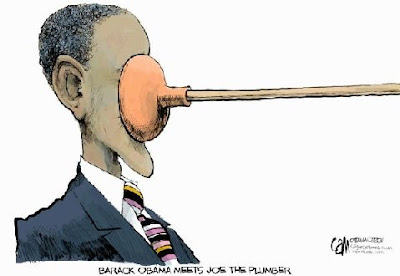 Posted by Unknown at (permalink) 11:48 AM No comments:

Thomas Sowell (who is black) is not an Obama fan:

After the big gamble on subprime mortgages that led to the current financial crisis, is there going to be an even bigger gamble, by putting the fate of a nation in the hands of a man whose only qualifications are ego and mouth?

Barack Obama has the kind of cocksure confidence that can only be achieved by not achieving anything else.

Anyone who has actually had to take responsibility for consequences by running any kind of enterprise-- whether economic or academic, or even just managing a sports team-- is likely at some point to be chastened by either the setbacks brought on by his own mistakes or by seeing his successes followed by negative consequences that he never anticipated.

The kind of self-righteous self-confidence that has become Obama's trademark is usually found in sophomores in Ivy League colleges-- very bright and articulate students, utterly untempered by experience in real world.

Posted by Unknown at (permalink) 10:15 AM No comments:

Have heard that Obama's concession speech (drafted ahead of time just in case he loses next Tuesday) has leaked? Here's the conclusion:

“In closing, I just want to thank all of the little people, and their imaginary friends, for the $600 million in contributions. You can be sure that every penny went to a good cause. Thanks to your generosity hundreds of oppressed, downtrodden and needy political operatives are able to keep a roof over their heads that they can retract in warm weather.”

“Traditionally, politicians end their speeches by saying, ‘God bless you, and God bless the United States of America’. But since you’ve probably heard that recording of my pastor, let me just say, in the words of Scripture, that I will always remember you as ‘the least of these‘, and feel confident in knowing that I have done it unto you.”

Reading this article by Bill Roggio (who is one of the very best sources of information on the War on Terror) got me to pondering on the evolution of warfare. There's nothing new about that, of course – the way that wars are fought has never been a static thing. Roggio's story linked above is about a Predator attack on a compound in Warzistan.

The combination of modern technology and quality intelligence is turning out to be a very effective tool for us. It seems to me that it is restoring some of the symmetry to what would otherwise be called asymmetrical warfare (or guerilla warfare).

Prior to the last few years, an enemy's leadership in a guerilla war would be relatively invulnerable to direct, personal attack. Even if we had intelligence on the location of someone in a leadership role, the only means we had for attacking that person would involve boots-on-the-ground Special Forces. Such a mission would be risky, costly, and would take precious time to organize and execute. Thus they didn't happen very often, and when they succeeded were occasion for much celebration. Some of the most memorable stories from earlier wars are exactly of that nature – Yamamoto in WWII, the several failed attempts on Hitler, the failed rescues of POWs in Viet Nam, etc.

Fast forward to today. I read stories like the one linked above every day or two. The common thread on all of them: actionable intelligence about the location of someone in the chain of command for Al Qaeda (etc.), and a missile delivered by a remote-controlled aircraft (usually a Hellfire missile delivered by a Predator). The location isn't necessarily in (or even near) a place where we have boots on the ground. The remote-controlled aircraft was generally on station nearby, ready to be used for such an occasion – this is possible because of the long “hover times” these aircraft have, and the fact that the “crew” (who are generally in the U.S.) can be switched out in seconds, so missions can last for days.

Think what this combination must be like for the Al Qaeda leadership. It's pretty much impossible for any effective leader to be invisible to his troops. Therefore lots of people have some idea where any given leader is. If you're the leader, you know that any one of those people could rat you out – and if they do, no matter where you are, no matter what time of day it is, no matter how many of your guys you're protected by, and no matter how fervently you pray as you kneel on your mat, a Hellfire missile might be the last thing you ever see.

That can't be good for morale.

Posted by Unknown at (permalink) 6:39 AM No comments:

The biggest story of the past few weeks: Sarah Palin’s massive CLOTHES budget. I join with political observers of all persuasions in demanding that the attractive Alaska governor wear far fewer clothes.

Read the whole thing.
Posted by Unknown at (permalink) 6:30 AM No comments:

Instapundit is running one of my favorite quotes from Robert Heinlein:

Throughout history, poverty is the normal condition of man. Advances which permit this norm to be exceeded — here and there, now and then — are the work of an extremely small minority, frequently despised, often condemned, and almost always opposed by all right-thinking people. Whenever this tiny minority is kept from creating, or (as sometimes happens) is driven out of a society, the people then slip back into abject poverty.

This is known as "bad luck."

Glenn didn't say this, but I'll observe that taking outrageously high taxes from those who had the gumption and creativity to improve the lot of their fellow man (and thereby make a profit) is one of the most certain ways to drive those same people away...