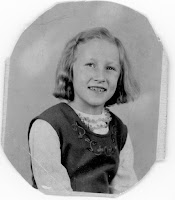 This is my mom's sister (my aunt) Bonnie, in an undated studio portrait.  It's probably a school portrait.  Bonnie looks to be about 9 or 10 in this photo, which would make it circa '45.  On the back, in a child's handwriting (presumably Bonnie's): “To my Daddy from Bonnie”.  You can see that it was rather crudely cut into an oval shape; I'm guessing that Bonnie did that as well.  Cute little girl, wasn't she? 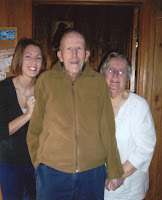 This one is dated by the lab as January 2009, but that couldn't be right.  The photo was taken in their Jacobstown, New Jersey house, the one they had custom built after their retirement.  It must have been taken earlier and developed later, or perhaps it's a more recent copy.  From their appearance, I'll guess that it was taken in the early 2000s.  Update: Holly tells me this was likely in January 2009, just before my parents moved to Virginia.  Left-to-right, the photo shows my niece Amber (I think!), my dad, and my mom.  My dad's chronic lymphatic leukemia had sapped much of his vitality at that point, and this may even have been taken during a course of chemo.  He looks so frail there, and I know he was already very restricted in his physical capabilities.  My mom, on the other hand, was still looking good.  She was actually also quite restricted physically, but somehow it's not as obvious in this photo.

My sister Holly and her husband Warren, in an undated photo taken in a location I don't know (but I'm sure my sister can fill in the details here!).  Warren is one of the most optimistic people I know, still fantasizing that someday he will beat me (on average) in Scrabble.  He's also got a great sense of humor, something utterly vital for anyone marrying into our family! :)  I'm guessing that this photo was taken sometime in the early 2000s, but that's based almost entirely on the shade of Warren's beard.  Update: Holly says this was taken at their home that subsequently burned down.  The pool fence is the one in the background.  The photo was taken before she left for Korea in 2004 or 2005.

Here's a nice snapshot of my brother Mark and his wife Gina.  The lab dates it as October '07, and that looks about right.  I have absolutely no idea where this was taken, but I'll guess it was on one of their vacations to Mexico.  Update: my sister tells me that this photo is from their wedding day, in Cancun, Mexico.  I'm not sure when that was!
Posted by Unknown at (permalink) 7:45 AM 1 comment:

My mom ... would have loved this!
Posted by Unknown at (permalink) 7:12 AM No comments: