We enjoyed yesterday's drive so much that we decided to repeat it – but reversing our path (going the other way always looks so different!).  Our fond hope was that we could repeat yesterday's wildlife spotting bonanza, but such was not to be.  In fact, it was nearly the complete opposite – we saw a few deer (and no fawns), and lots of marmots and chipmunks – but no weasels, pikas, western tanagers, osprey, elk, etc.  If it wasn't for one rather nice encounter with a ptarmigan (more below), we'd have come up almost empty-handed.

The trip started with a quick run up to Engineer Pass – we were up there by 8:30 am.  The two panoramas below were taken from a small knoll just southwest of the pass.  Taken together, they form a 360° panorama from that location.  It sure feels like the top of the world!

The aforementioned ptarmigan encounter occurred on the road from Engineer Pass down to Lake City, at the same place where Debbie spotted the ptarmigan yesterday. We were on the lookout for it again, off in the draw where she had spotted it – when suddenly I spotted the ptarmigan, alongside the road directly in front of the jeep! I slowly got out of the jeep with my camera, hoping to get close enough to get a decent shot. As I walked toward the ptarmigan, she started walking away, and I followed – but then I noticed movement under my feet. Chicks! She had chicks following her! I think she was trying to lure me away from her chicks, but I took a quick couple of snapshots of them and of her, and left.  The little chicks made the most piteous noises as they ran around seaching for their mama.  As soon as we got back in the jeep, the mama came and rounded up her babies.  Photos below. The first one is the mama, the second shows a single chick, and the third shows two chicks (look hard!)... 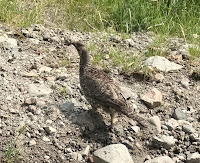 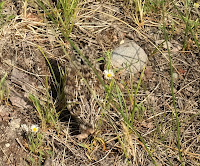 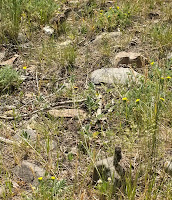 This kiln is along the road between Engineer Pass and Lake City – really looks out of place, but the explanation makes perfect sense: 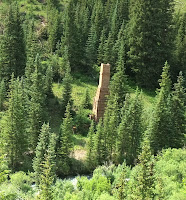 Here's a better shot of the cabin we saw yesterday and liked so much. We found out today that the asking price is $649k.

As we were driving up California Gulch, this snow caught my eye because of the curvy edge of it. If you look carefully, you can see that all the curves match the shape of the rushing stream below it – where the stream bumps up over a boulder, the snow was cut in a matching curve, and so on for everything that varies the shape of the water.

Here are some more scenes from today's travels: 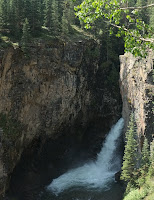 Last but not least, here are the flowers from the day: 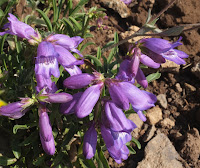 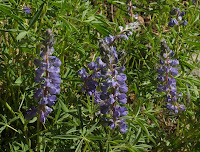 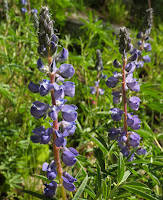 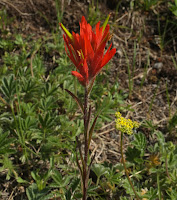 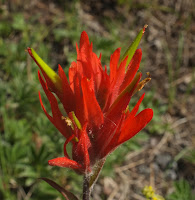 Posted by Unknown at (permalink) 7:57 PM No comments: