Even I Can Understand This...

If you know me, then you know that I am not at all interested in sports.  Any sport.  I know so little about sports that I can't even identify most sports when I see them being played.

But I understand this:


On rare occasions these days, I feel some hope for the survival of the human species.  Watching this brought that hope back, at least for a few minutes until I watched a video of Obama declaring that he wasn't a dictator.  I should make a page with a bunch of these on it, to help me regain my spirits on such occasions...
Posted by Unknown at (permalink) 11:30 AM No comments:

Map of National (and Some States/Provinces) Wealth...

Wealth of a country (or other geopolitical entity) is a notoriously slippery datum to measure.  It isn't enough to convert per capita income to a common currency and compare them, because the cost of living varies tremendously from place to place.  Furthermore, in some political systems (I'm looking at you, Mother Russia, Mexico, China, Nigeria, India, et al), pervasive corruption means that significant fractions of their economies are underground and therefore not even in the official per capita income data.  What's a poor statistician to do?

One possibility is to find a proxy for that which you're trying to measure.  Ideally the proxy would be perfectly proportional to the value you actually want to measure, and could be measured without perturbing the value you're trying to measure.  In the case of the wealth of countries, some scientists have proposed the prevalence of outdoor artificial lighting at night as a proxy.  Their thinking is that the wealthier any country is, the more outdoor artificial lighting they'll use.  And very conveniently, outdoor lighting levels can be easily measured by existing satellites, hundreds of which image the surface of the earth every day.

The map below is the result of an attempt to make exactly this measurement.  As I cast my eye over the map, relatively few of the results look unexpected to me.  For instance, I wouldn't have guessed Greenland was so prosperous, nor Paraguay so poor.

Posted by Unknown at (permalink) 10:04 AM No comments:

Peoplemovin is a well-done interactive visualization that lets you see migration to or from any given country.  For instance, in the clip below I've clicked on the Phillipines on the right, to see where people migrate to the Philippines from.

There were lots of surprises for me as I browsed around this visualization.  In the example case, I never would have guessed that the top three sources for immigrants to the Philippines were the U.S., China, and the U.K.  I spent about nine months (in several stretches) in the Philippines when I was in the U.S. Navy, way back in the '70s, and I did run into quite a few U.S. military retirees.  I wonder if that's where most of these immigrants come from? 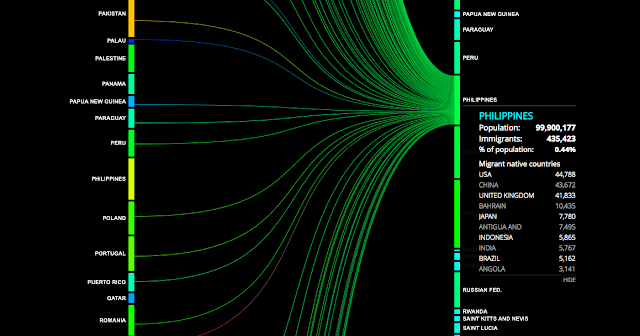 Posted by Unknown at (permalink) 9:49 AM No comments:

A nice, partially organized collection of free datasets, publicly available on the Internet (either via download or API).  The sources include private companies, educational organizations, non-governmental organizations, and governments.  There's a lot of interesting stuff in here on a wide variety of subjects...
Posted by Unknown at (permalink) 9:40 AM No comments:

A new open source, Apache licensed general purpose Deflate-compatible compression algorithm.  This one consumes more CPU time to get a little better compression; it's aimed mostly at web sites delivering a large amount of static content.
Posted by Unknown at (permalink) 8:35 AM No comments:

Sinkhole Swallows a Man in His Bed...

This is a frightening scenario that actually happened last night.  You're asleep in bed, and all of a sudden an enormous sinkhole opens up underneath your bedroom.  Your entire bedroom – including you! – is swallowed up.  You scream for help, and it arrives – but they can find no sign that you ever existed.

Definitely the stuff of nightmares...
Posted by Unknown at (permalink) 8:32 AM No comments:

Direct connections between brains and computers are getting ever closer...
Posted by Unknown at (permalink) 8:27 AM No comments:

I recently blogged about the spat between Elon Musk (of Tesla Motors) and the New York Times.  Musk was convinced that the Times was lying about the results of a test drive they made in a Tesla car, smearing the company's good name and reputation in the process.  Instead of suing the Times through our court system, Musk appealed to the “court of public opinion” by publishing an open letter to the public.  His letter was publicized by hundreds of news sites, newspapers, and blogs.  In the resulting kerfuffle, the New York Times reconsidered its stance and reversed its previous support for their reporter, withdrawing the story.  Elon Musk won that “case” in a manner far more convincing to the public than anything I can imagine emerging from a case pursued in the traditional courts.

I thought that case was interesting, which is why I blogged about it.  Security expert and cryptographer Bruce Schneier saw it as one example of a pattern of behaviors enabled by the Internet.  It's part of the rise of an alternative system of jurisprudence.  An excerpt from his recent article on Wired:


The court of public opinion is an alternative system of justice. It’s very different from the traditional court system: This court is based on reputation, revenge, public shaming, and the whims of the crowd. Having a good story is more important than having the law on your side. Being a sympathetic underdog is more important than being fair. Facts matter, but there are no standards of accuracy. The speed of the internet exacerbates this; a good story spreads faster than a bunch of facts.

The court of public opinion has significant limitations. It works better for revenge and justice than for dispute resolution. It can punish a company for unfairly firing one of its employees or lying in an automobile test drive, but it’s less effective at unraveling a complicated patent litigation or navigating a bankruptcy proceeding.

Mr. Schneier is onto something here.  I found myself thinking along these lines recently, as I'm currently in a dispute with a large environmentalist organization.  Seeking justice in a court of law is an intimidating, expensive, and very uncertain proposition.  Seeking justice in the court of public opinion just might be a better alternative – though not one that occurred to me immediately.  Apparently I'm more of a hidebound traditionalist than I thought I was :)
Posted by Unknown at (permalink) 8:25 AM No comments: 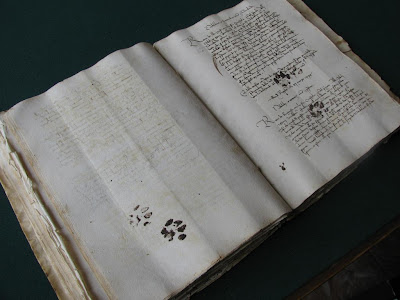 At right is a 15th century manuscript with unmistakeable feline paw prints on it, in ink.  The cat must have walked over the page while the ink was still wet, no doubt frustrating the heck out of the scribe.

Below is another example of cats messing with scribe's heads – and this one decided to curse the cat in writing (translated from the original Latin):


Here is nothing missing, but a cat urinated on this during a certain night. Cursed be the pesty cat that urinated over this book during the night in Deventer and because of it many others [other cats] too. And beware well not to leave open books at night where cats can come.


All cat lovers will instantly identify with these :)  Owning cats most definitely has its rewards, but not all is purring and affection... 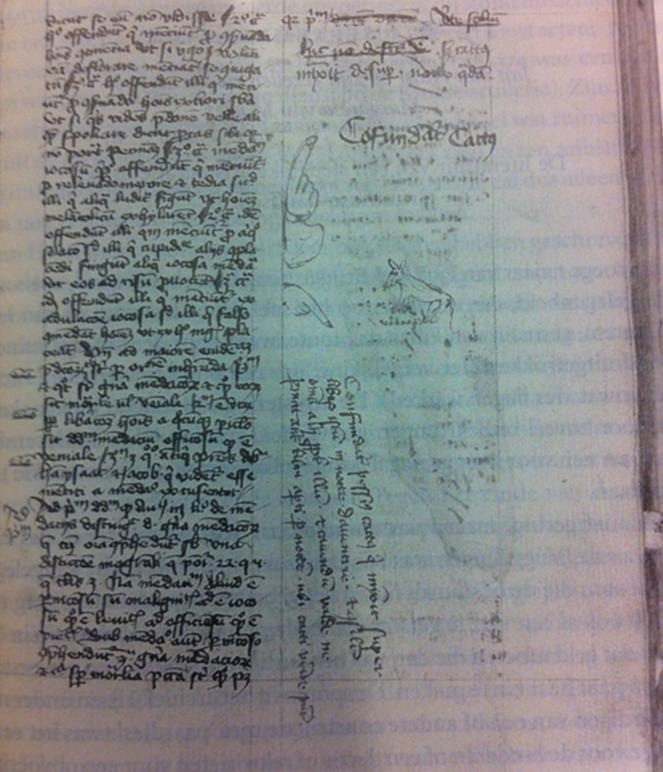 Posted by Unknown at (permalink) 8:06 AM No comments: