Many moons ago, before my beard was gray, I lived on my parent's farm in New Jersey.  I had a “shack” behind the house where I did a lot of my early experimentation with electronics.  Some TV repair shop (remember those?) gave me a broken stereo record player – one of those all-in-one units the size of a refrigerator on its side.  This was a vacuum tube design with “electrodynamic” speakers (meaning that they had electromagnets instead of permanent magnets).  By today's standards, it was quite a monster unit.  I remember that it had 18" diameter woofers, and three or four other speakers, all coupled with (for those days) a relatively sophisticated cross-over network.

One of my first successes in electronics was to fix that thing.  That's more of a feat than you might think, as I had no schematics.  I reverse-engineered the audio amplifier and discovered a blown-up resistor that prevented a key bias voltage from being generated.  This was in 1969, a month or two before the first moon landing, and I can still remember the hand-drawn schematic I made – and the overwhelming flush of victory when I figured out what the problem was.

Within 15 minutes of finding the problem, the stereo was up and running – I'd scavenged a replacement part from a broken TV.  After that, the stereo was my constant companion in my little electronics shack.

A year or so later, I bought a double vinyl album: “Tommy”, by The Who.  I couldn't afford to buy many records, and those few I did were played very often.  “Tommy” sounded particularly good on that stereo, so it got played extra often.

A few years later, I was in the U.S. Navy and something happened to that album (I don't remember what, exactly).  I've not heard “Tommy” since.

Until today, that is.  I just purchased it from iTunes, and I'm listening to it as I write this post.  There are several things about this experience that are kinda freaking me out.

First, the flood of memories about that shack.  Suddenly I'm remembering all sorts of details that I haven't thought about in many, many years.  There are very strong associations between that particular music and my very earliest engineering experiences.

Second, I still have perfect memory of that album.  As each song plays, I know what's coming next.  I know the words to every song.  The “Underture” is playing now, and every note in it is as familiar as the back of my hands.

Third, I am frequently startled by the different sound of the music, all of which can be accounted for the the difference in quality (by any measure!) between that old stereo and the way I'm playing it back now (through iTunes on a Mac Powerbook, through top-notch computer speakers).  I hear details clearly now that I've never heard before, and they surprise me.  But it's all good!

Powerful stuff, music is...
Posted by Unknown at (permalink) 2:53 PM No comments:

Taken in New York last week.  Sure glad I wasn't there...

Nice job on the video, though...
Posted by Unknown at (permalink) 12:06 PM No comments:

Lea is our oldest dog; she's a field spaniel, about 13 years old.  She's still in good health, but creaking a bit, and her sight and hearing aren't what they used to be.  She spends a lot of her days curled up in a dog bed.

I just spent about five minutes down on the floor, next to her on one of those beds.  She kissed me, grunted, and made happy faces while I held and caressed her.

That's a list of the California state government agencies.

That's where the money that the theiving legislators are stealing from me is going.  Looks to me like at least 95% of them should just be disbanded!
Posted by Unknown at (permalink) 8:54 AM No comments:

We had a very nice evening last night.  Debbie and I, our neighbors Jimmy and Michelle, another neighbor Paula C., and Jimmy's sister Jackie, all got together for a luscious meal.  We all contributed to its making and to it's destruction.  The menu:

For some reason I can't quite put my finger on, I didn't have much appetite this morning!

I stayed up to the ungodly hour of 10:30, but my head was in danger of hitting the table so I went home (and I drove Paula back down the hill as well; she was also ready to go home).  But Debbie, Jimmy, Michelle, and Jackie rang in the new year, playing cards until 12:30.  By that time I was sound asleep!
Posted by Unknown at (permalink) 8:29 AM No comments:

That's how many new California state laws go into effect today.  Just the state laws, mind you – that number does not include new county, municipal, or federal laws.

Sometimes it really feels quite hopeless.

And then I think: Rope, tree, legislator.  Some assembly required...
Posted by Unknown at (permalink) 8:20 AM No comments:

You Are Trying to Confuse Me With Facts!


Posted by Unknown at (permalink) 8:15 AM No comments: 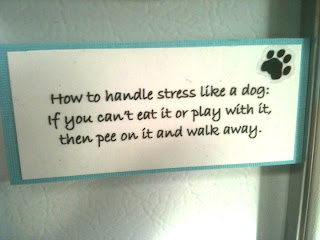 Posted by Unknown at (permalink) 8:09 AM No comments: