Here be dragons...  Bill Whittle's latest.  It's excellent...
Posted by Unknown at (permalink) 1:19 PM No comments: 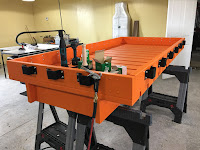 Paradise pockets...  All the trailer pockets are now installed: 72 holes measured and drilled, 72 carriage bolts seated with a mallet, 18 pockets installed onto the bolts, 72 washers and nuts threaded on and tightened, and 72 bolts cut off.  It was actually a bit more work than I just listed, as after I installed the 14th pocket I discovered that it matters what direction they're installed – there's a top and bottom to the things.  Who knew?  Well, I had a 50/50 chance of getting each one installed correctly, and in fact I had installed 7 of 14 the right side up.  The other 7, though, I had to uninstall, turn over, and re-install.

Tomorrow I shall start on the stake sides.  Woo hoo!
Posted by Unknown at (permalink) 12:49 PM No comments:

A reader asks ... what I think about Obama's trip to Cuba.  From the wording of the question, it's obvious the reader thinks I will be appalled.

I am not appalled by the idea of normalizing relations with Cuba, dropping the embargo (which Obama can't do on his own; he needs the Congress for that) , and encouraging business to invest there (assuming the Cuban government changes their policies to allow it).  In fact I support these ideas, as it's been clear for 30 years or so that the 50+ years of Cuban embargo and isolation have been a complete failure in terms of their original goals (bringing the Cuban government to its knees).  It seems at least worth trying a different approach, especially when that different approach will bring at least a little more prosperity to the Cuban people.  It's also possible that it will bring changes in the authoritarian government.

I am appalled by the way that Obama has gone about it.  The optics of that portrait of him saluting in front of the Che Guevara mural are just horrible.  He's apparently obtained very little in the way of concessions or commitments from the Cubans.  He's allowed himself to be used by Raul Castro in a way that makes the U.S. seem like the supplicant.  He's managed to take an opportunity for America to shine and turn it into a moment of American shame.

But nevertheless I'm glad to see some movement on this front.

Now if we could just get the U.N. out of the refugee business, we'd really be making some progress!
Posted by Unknown at (permalink) 8:21 AM No comments:

Trailers in Paradise...  So I restarted working on a project I stopped last fall: building a four-wheeled stake-bed trailer.  Yesterday I installed six “pockets” for the stakes, and today I'm hoping to install the rest of them.

Aside from some tricksy measuring (involving division of fractions!), there's nothing particularly challenging about installing these pocket brackets.  I'd cleaned and painted them last fall.  All I had to do yesterday was mark the holes, drill them, and then fasten them with bolts.  The nuts I used have nylon elements built in to hold them in place (the same thing that lock washers do, but neater).  These take quite a bit of torque to screw on – more than the square end of a carriage bolt can resist, in most cases.  So there was a bit of tricky use of pliers to keep the ends of the carriage bolts from twisting.

One nice little touch was enabled by the oscillating saw that I bought last year (in the second photo), after watching some of our remodeling craftsmen using one.  I was able to cut the bolts off to the exact correct length.  It took six seconds for each bolt with that saw.  Lovely thing, it is! 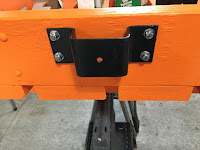 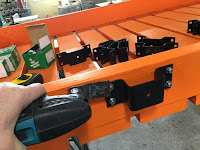 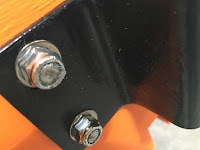 Posted by Unknown at (permalink) 6:16 AM No comments:

This guy thinks ... we should all be legally required to vote.  Under our current system, I think that's completely absurd, for reasons given right in his article: for many of us, voting is a completely meaningless act.  Why?  Because we know our vote wouldn't count for a darned thing.

For instance, here in Utah casting a vote for a Democratic candidate for president is just such a meaningless act.  The state is completely in the tank for Republicans, and there is precisely zero chance that a Democratic candidate could prevail.  So what would be the point of forcing someone to cast that vote?  It will have no effect on the outcome at all.

Utter uselessness aside, I also object on a different basis.  Refusing to vote is just as much an electoral choice as casting a vote is.  The absence of my vote for, say, Trump is contributing to the outcome exactly as much as a vote for Clinton – but without endorsing Clinton.

Then there's this.  Consider that the likelihood (at the moment, anyway) is that the November election will be a choice between Trump and Clinton.  The idea of forcing someone to choose between those two is morally repugnant.  It would be like forcing someone about to be executed to push the button that injected them with fatal drugs...
Posted by Unknown at (permalink) 4:23 AM No comments:

I finally found ... the quote from John Ehrlichman that first started me thinking about the abject failure of the war on drugs.  Here it is:


“You want to know what this was really all about?” he asked with the bluntness of a man who, after public disgrace and a stretch in federal prison, had little left to protect. “The Nixon campaign in 1968, and the Nixon White House after that, had two enemies: the antiwar left and black people. You understand what I’m saying? We knew we couldn’t make it illegal to be either against the war or black, but by getting the public to associate the hippies with marijuana and blacks with heroin, and then criminalizing both heavily, we could disrupt those communities. We could arrest their leaders, raid their homes, break up their meetings, and vilify them night after night on the evening news. Did we know we were lying about the drugs? Of course we did.”

This is an admission by an insider to the initiation of the so-called war on drugs that the motivation was political, not out of any concern for the people using drugs or the rest of the population.  It was all about winning elections.

I found it in an article that I almost didn't read, because I know I have major disagreements with the author, Dan Baum.  He's an advocate for legalizing drugs (and ending the war on drugs), as am I.  However, he strongly advocates for making drug production and distribution a state monopoly, a notion I find abhorrent.  We have a state monopoly on alcohol distribution where we live in Utah, and the only things that accomplishes here are increased prices and inconvenience.  But the rest of the article is a good backgrounder for anyone who isn't already aware of the scam that's been pulled on them concerning drugs...
Posted by Unknown at (permalink) 4:15 AM No comments:

Quote of the day...  This time from Scott Adams, who has been correct about Trump more often than anyone who makes their living as a “pundit”.  He's also been far more interesting.  Here's the quote:


“Those who think the past predicts the future are condemned to pick the wrong stocks.”

If Scott Adams is right about how the (human) world works, then we're all a bunch of damn fools.  And there are bits and pieces that feel very right to me...
Posted by Unknown at (permalink) 4:02 AM No comments:

I wrote about ... our excellent meal at Sea Bears Fish House in Ogden last month.  This morning I see that they're in the news, mainly because of their second amendment support.

Have I mentioned that we love living here?  :)
Posted by Unknown at (permalink) 3:55 AM No comments:

I don't know the whole story on this...

I don't know the whole story on this ... but still, it's hard to see how this is in the best interest of the little girl...
Posted by Unknown at (permalink) 3:47 AM No comments: 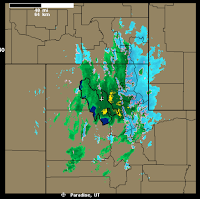 Heavy rain in Paradise...  The noise woke me up around 1:30 am, and it's continued non-stop since then.  The radar picture as of a few minutes ago (at right) shows no end in sight.  The forecast called for a half inch of rain tonight, but I'm guessing it's going to clock in over that.

What little snow remained on the ground last night should be melted by the time this is over :)
Posted by Unknown at (permalink) 3:46 AM No comments: