A new slide rule!  I haven't purchased a slide rule for my collection in about five or six years, though I still have Google alerts out for a few particularly rare ones that I'd love to get my hands on.  My entire collection (about 2,200 slide rules) is still in the boxes we packed them into when we moved to Utah from California; getting them displayed somehow is on my long list of things to do.

But ... a couple weeks ago I got an email from a fellow in England, who had somehow tracked me down.  He had a slide rule that he thought was likely quite rare, and he thought I might be interested.  Well, he was certainly right about that – because what he had was one of the solid brass (and quite heavy!) Japanese artillery slide rules used on Japanese battleships and large cruisers.  My own research indicates that only a small number – probably just fourteen – of these things were ever made.  I already had one, acquired by pure serendipity from an estate sale.  I know the whereabouts of two others: one in a naval history museum in Washington, D.C., the other in a another collection.  Now a fourth has popped up.  The English fellow asked a perfectly reasonable price, so I agreed to buy it – and today it showed up.  Here are a couple photos of it, as I received it: 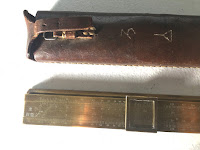 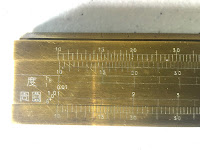 This one is in better condition than the one I already had, especially it's hand-stitched leather case.  On this one the cursor springs are still intact, and there are no significant scratches or dings in the brass.  Only a navy would conceive the idea of making a slide rule from brass.  Being an old sailor, of course the first thing I thought of was the poor enlisted guy who was tasked with keeping this thing perfectly polished! :)  If you weren't in the Navy yourself, I'll let you know that the entire purpose of using brass in the Navy is the opportunity it creates for torturing a sailor with polishing work!
Posted by Unknown at (permalink) 4:15 PM No comments:

Here's a rare photo of my parents' dwarf and rare conifer nursery.  This is a mounded display bed near the front of the nursery, one that my mom was particularly proud of.  The photo is undated, but most likely it was taken in the mid- to late-'70s.  On the back, in my dad's all-caps printing: “Mound Garden Display at Dilatush Nursery” The photo is taken looking to the southwest; our home would have been roughly behind the spruce that's about a quarter of the width from the left.  The shed visible in the background is a remnant of the building I'm familiar with from my youth; basically just a garage and an office remained.  Toward the left of the photo, a smaller barn that used to be there is completely missing.  Just out of the photo to the left used to be Julius Mate's storage shed, and a bit further, his home.  I'm pretty sure those had already been demolished by the time this photo was taken. This photo is a little jarring for me, as it shows what is clearly the farm I grew up on, but in a condition I only saw a couple of times while on leave from the U.S. Navy.  When I lived there, a decade or so earlier, the farm looked much different – perhaps especially in this particular place on the farm.

Here's a photo I'd not seen before.  It's dated (by the lab) as August 1983.  On the back, in my dad's all-caps printing: “ACS Founders” The eight people standing in front of the National Arboretum administration building are the founders of the American Conifer Society, and the one on the far right of the photo is my dad.  I once visited there with my dad, on the one trip I took with him east of the Mississippi.  We actually went to that very building in the late '80s, to meet a friend of his.  My dad never mentioned that he'd been there before, or why – classic Pater. :)  I don't know any of the others in the photo, but one of them quite surprises me: the lone woman.  I'm surprised because in all my travels with my dad, during which I met dozens of his colleagues – botanists and horticulturists and nurseryman – I never met a woman, nor did my dad ever mention one.  And yet a woman (presumably) botanist was a co-founder! This photo also brings home something I never noticed about my dad until I was an adult: he was a small man, fairly short and slight.  His doctor once told him that his physique was a result of being a “Depression child”, living his high-growth years (5 to 17 years old, for him) during the Great Depression, when good nutritious food was scarce and dear.  The same doctor told him that the “tell” was the length of his arms and legs, both too long for his small torso.  I have no idea if that's actually accurate, but this photo of my dad certainly highlights those attributes.  Something you can't tell from this photo at all: being a founder of this organization was something very difficult for my dad.  He was (like me) an introvert, and meeting with groups – even with groups of people he liked – was hard for him to do.  He persevered because he really wanted to see the organization work, to popularize conifers (especially the dwarf conifers he so loved) with horticulturists and nurserymen.

This photo was a tear-jerker for me, for several reasons – it's a trove of memories.  It's undated, unfortunately, but on the back in my mom's handwriting: “Mom + Aunt Kitty in camp”.  The “camp” refers to her father's cabin on the shore of Long Pond, near North Lincoln Maine.  The interior of it matches my very earliest memories of it, before a bathroom was added (so we used the outhouse), and before running water was installed for the sink.  A big soapstone sink was in the cabinet below the window visible in the photo.  The “cabinet” was really just some shelves with drapes hung to hide what was on them.  There were gallon jugs of spring water on one of those shelves, and periodically we went to one of two local springs to refill them.  This reminds me of a big “growing up” moment for me when, one year, my mom told me to take a bunch of empty water jugs in our little 5HP motorboat to the spring across the pond (about a half mile) – by myself.  I'd gone with my dad or her on all our previous trips.  I think I was 8 or 9 when that happened, and it was a big moment for me – similar to when my dad told me to take the tractor to mow by myself.  The woman at the left, seated, is the lady we called “Aunt Kitty”, though she wasn't (to my knowledge) actually related to us.  I didn't know she'd ever visited Maine; I believe she lived in northern New Jersey, though I'm not even sure about that.  When I was quite young we saw her often, and we loved her.  I don't know the woman standing behind her.  The woman sponging herself off is my grandmother Mable, my mom's mom.  At far right, near the bottom of the photo, you can see the grand wood stove we had in that camp.  The octagonal wooden table (at which Aunt Kitty is seated) still exists, and soon will have a permanent home in the new cabin being built by my brother Mark.  It was in my mom's home until she died.  I'm guessing from all these details that this photo was taken no later than the late '50s, and possibly considerably earlier. 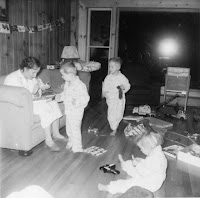 This is Christmas 1957 in the home I grew up in.  The photo is dated (by the lab) January 1958, and in my mom's handwriting it says “Christmas”. My mom is seated on the couch, with my brother Scott in front of her.  I'm a little to the right, and my sister Holly is on the floor.  The Christmas cards we received are strung up on the wall, something my mom did every year.  The Christmas tree would have been just out of the photo, to the right.  Mom appears to be opening a gift, with Scott looking on curiously.  I'm holding a sock for some reason, and watching mom as well.  To the right of me in the photo is a chalkboard easel, and written on it: “To Tommy From Uncle Donald”  The handwriting looks like my dad's.  I have no memory of ever getting a gift from Uncle Donald, and the very idea seems preposterous – I'd of guessed he would believe that gifts were offensive to God.  The floor is littered with gifts, none of which I remember.  There are some still unopened, so this must have been taken early on Christmas morning (which is when our family opened Christmas gifts).  On the table or cabinet to the right of Scott's head is a pile of something I can't quite make out.  It looks a bit like a pile of paper-wrapped burritos, but that couldn't be the case.  Maybe one of my siblings will remember it.  Around the picture window and its side windows is the big pine “picture frame”.  I remember the carpenters coming in to install that.  You can make out the 45° joint at the upper left.  My mom wanted something to hide the rough framing job done on the windows; the knotty pine paneling didn't do the job well.  The carpenter – the same fellow that built our house – came up with this idea, which my mom loved.  All it took was three pine planks and some careful sawing, and it really did look very much better afterwards.

Finally, here's a nice photo of my grandmother Mable, my mom's mom.  the photo is undated; on the back in my mom's handwriting: “Mom”.  She's in the “starter field” of my grandfather's nursery, a place I remember fairly well.  Just out of the photo to the left would have been his greenhouse, where I spent several days helping him pot seedlings.  To the right of my grandmother you can see the wooden frame of a “cold frame” that was covered with plastic or glass in the winter, and kept clear of snow.  Near the left edge of the photo you can make out a bench made of lathe strips.  My grandfather made this bench, and I “helped” him when he put it out at the edge of his little vegetable garden (which is to the left of the short fence also visible there).  I was perhaps five or six years old.  After we got the bench right where he wanted it, my grandmother brought him a can of beer and sat there with me, contemplating his garden.  A happy memory...
Posted by Unknown at (permalink) 3:49 PM No comments: