More memories ... from my mom's collection of photos.  The four photos here are modern copies of older photos; I don't have the originals.

I have no idea what that actually means, nor what name stuck with her dad.  I'm inferring that this is a photo of mom from that note.

This is the woman we called “Aunt Kitty” (though really she wasn't related), and the child is my mom's younger sister Bonnie (my aunt).  It's undated.  I'd have recognized both, but my mom's note on the back clinches it: “Aunt Kitty & Bonnie”.  Interesting that my mom called her Aunt Kitty, just as we did!  If Bonnie was around 7 in that photo, it would have been taken somewhere around '46 or '47, toward the end of the war.  Is it just me, or do Bonnie's head and arms look too big for her body?

This one, according to my mom's note on the back, shows “Vivian, Betty, and Lillian Audey”.  Betty was her older sister and my aunt.  Lillian was another sister (and my aunt).  I don't recognize Vivian and Audey as sisters, though they both could be – I didn't actually know my mom's family all that well, and other than Aunt Betty and Aunt Bonnie, we didn't see them very often.  I don't know the date or the location.

On the back of this photo, in my mom's handwriting, this:

From this I'm inferring that the two older kids are (left-to-right) my mom and her brother (my uncle) Donnie, and the two younger kids (left-to-right) are her sister (my aunt) Bonnie, and a neighbor kid Steven.  The dog I'm sure is named “Bum”; mom told stories about that dog, but I'd never seen a photo of him before.  I'm also assuming it was taken in Locust (given Steven's presence), though the house behind them isn't the house I knew in Locust.
Posted by Unknown at (permalink) 10:13 AM No comments:

Philae has been found! Philae has been found!  Details here.  Congratulations to the Rosetta/Philae team for the successful detective work...
Posted by Unknown at (permalink) 9:25 AM No comments:

A morning walk in the country...

A morning walk in the country...  With Mako and Cabo.  They're getting noticeably better with each walk.  This time, though, we did have one small catastrophe: Mako freaked a little bit when our neighbor's horses came running over to see us.  Somehow he managed to wrap his leash around my leg in such a way that it ripped my iPhone right out of my belt pack, and it went tumbling to the concrete in front of our neighbor's barn.  My screen now has two big cracks across it. :(  Everything still seems to work fine, amazingly, so for the moment at least I'm just going to ignore it as strictly a cosmetic issue. 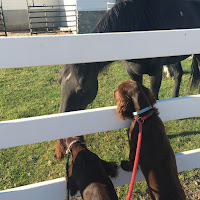 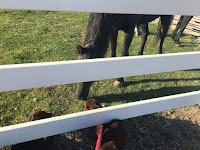 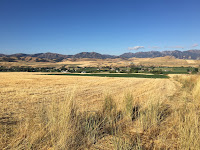 Posted by Unknown at (permalink) 9:19 AM No comments:

Debbie made it to Inspiration Point...

Debbie made it to Inspiration Point...  And she saw about 15 Rocky Mountain goats, including 5 or 6 babies.  Woo hoo!  The trip wasn't nearly as hard on her knee as I was expecting.  In fact, the worst part about the trip for her wasn't the rough road – it was the simple length of the trip (five hours).  In that time her left foot got quite swollen and painful.  This is normal for a foot that's not being walked on, and that issue will go away once she starts putting her full weight on it while walking.  It looks like the practical limit for a drive for her is about three hours until that happy day.

We left around 4 pm, and didn't get home until after 9 pm.  When we arrived at Inspiration Point, around 7 pm, it was quite dark from thick clouds overhead, and there was a light rain.  The visibility wasn't the best, and the mountain goats weren't as near by as when Tim and I were here earlier in the week – but they were still closer than any we saw in the San Juan Mountains two years ago, and we had great views of them through binoculars and telescope.  No photos, though.

We left Inspiration Point for home around 7:30 pm.  Within a half hour or so it was dark enough that we needed our headlights – and by the time we reached Mantua it was pitch black out.  I used the overhead lights for most of that time; really appreciated the visibility all that light (four high-power headlight bulbs) provided.

The road was incredibly busy with traffic on the weekend.  Lesson there: never go on a weekend!  Despite the high volume of traffic, though, there weren't many people actually at Inspiration Point.  That part, at least, was quite pleasant.

We took Cabo and Mako with us for their first four-wheeling trip, and for the new altitude high for them (9,400').  They did just fine.  Mako was either asleep or sleepy for nearly the entire trip.  Cabo was awake, observing, and sniffing like mad for nearly the entire trip.  Both were good car riders, with (as with all our other field spaniels) not the slightest hint of car sickness or fear.  I walked them once, at Inspiration Point, and despite having other people and even a dog around, they didn't get afraid or overly excited.  Good puppies!

There were some pretty scenes as we headed back, looking west: 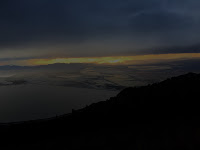 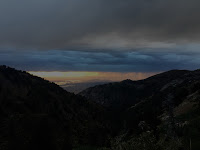 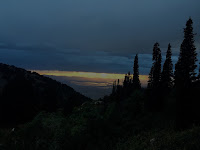 Posted by Unknown at (permalink) 9:13 AM No comments: