Months ago, Virginia's Attorney General (Ken Cuccinelli, a Republican) initiated an investigation of fraud targeting Dr. Michael Mann (the infamous “hockey stick” graph creator).  Dr. Mann is a professor at the University of Virginia, and Cuccinelli is investigating the misuse of public funds.

I've not commented on this before, because I wasn't sure in my own mind whether the investigation was justifiable (not being party to whatever evidence Cuccinelli had) and was quite possibly more of a witch hunt (Cuccinelli is an outspoke AGW skeptic) than of substance.

But today comes news that makes me wonder.  It seems that two state Senators (Democrats, both) have proposed legislation that would prevent Cuccinelli from continuing his investigation, by retroactively removing his authorization.

And now I'm more inclined to believe that Cuccinelli had something real to investigate.  Otherwise why would there be retroactive butt-covering going on?

Get 'em, Cuccinelli!  String 'em up!
Posted by Unknown at (permalink) 7:13 AM No comments: 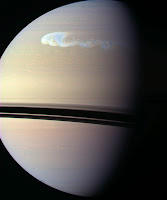 Photo by the intrepid robotic explorer Cassini, which is still collecting science every day as it whips around in the Saturnian system.  APOD featured this photo today...
Posted by Unknown at (permalink) 3:58 AM No comments:

Via reader Aaron B., this very nicely done takedown of the typical poorly-informed, poorly-reasoning member of the public who believes in the pending AGW doom:

Posted by Unknown at (permalink) 3:26 AM No comments: