More memories ... from my mom's photo collection.  All of these photos are modern copies of older photos, and I do not have the originals.  None of them are dated by the lab.

On the back, in my mom's handwriting: “Don MacLaughlin front right”.  That would be her brother (my uncle) Donnie.  They're wearing some formal clothing that I don't recognize, all with sashes and bow ties, and a scarf of sorts around their necks that has different initials for different people.  The fellow at the lower left is holding a stick with ribbons on it.  I've no idea what sort of an organization requires this kind of odd dress.  Whatever it was, my uncle was apparently part of it!

My mom wrote “Don & Elinor” on the back of this one.  She's on the left, my uncle Donnie on the right.  There's a building in the background that looks curved, perhaps a water tank or the base of a water tower.  I don't recognize the location.  My mom appears to be about 6 or 7, placing this in '41 or '42.  I'm guessing summer of '41, just prior to the U.S. entry into WWII.  They look quite happy and carefree in this photo.

This one says “Aunt Mattie & Bonnie” on the back in my mom's handwriting.  I don't recognize the location.  That's her sister (my aunt) Bonnie (the kid), and the mysterious Aunt Mattie who I haven't been able to actually identify.  Again in this photo Bonnie's head looks too big for her body.  At that time, and when I was young as well, it was common and normal for little prepubescent girls to run around topless as Bonnie is here.  It's much less common today (in the U.S.).  We're getting even more prudish, to the amusement of basically the entire rest of the world. :) 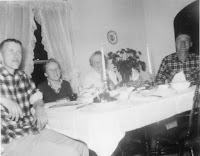 This one was taken in the dining room of our home in Robbinsville.  On the back, in my mom's handwriting: “First Thanksgiving in Elinor + Tom’s new home 1953”.  I'd have been a year old, but I'm not in the photo.  Left-to-right: my dad (looking incredibly young and sporting the mustache I don't remember), my aunt Bonnie, my maternal grandmother Mable, and my maternal grandfather Donald MacLaughlin.  You can see a plate on the east wall; I remember that plate.  A hutch filled that location later, with many plates and teapots on it.  The arched doorway behind my grandfather led to our living room.  My dad was 29 years old in that photo, and had already been a soldier, a chicken farmer, and now a nurseryman.  He'd helped build a house (the one he's sitting in!), obtained a mortgage, learned to type 70 wpm, and had traveled all over northern Africa and southern Europe.  That winter he would buy a WWII surplus jeep, brand new, packed in barrels of cosmoline.  Over the next couple of winters he assembled it, got it running, and he kept it for about four more years.  I have a few memories of riding with him in that canvas-topped thing, one in particular in the mountains of West Virginia when I was four or five years old...
Posted by Unknown at (permalink) 10:12 AM 2 comments:

Paradise ponders...  This past Saturday I was planning to take apart Debbie's new desk (just arrived in a shipment), so that we could easily move it upstairs.  This is what we did to the larger desk that we'd purchased from the same vendor.  But curses, I was foiled again!  For some reason the vendor decided to glue this desk together, along with the same sort of screws he'd used before.  Of course I didn't figure this out until after I removed eight screws, and after I had to run to Home Depot to get a flexible shaft so that I could fit my electric screwdriver into the incredibly tight space.  Dang it!

So yesterday I put all the screws back in, and then my brother Scott came down to help me move all this stuff.  He and I moved the larger desk (in pieces) up to my office on the second story of our barn, and then we moved Debbie's desk (in a single piece) to her second floor office in the house.  That desk weighs 270 pounds (it's built out of solid black locust logs).  We used a complicated set of methods to move it.  First, we strapped it to a hand truck, padding it with a blanket and cardboard to prevent damage to the top (a 4" thick slab of black locust).  Then we rolled it out of the barn, where I had unpacked it from its shipping pallet.  After that, we skidded it carefully onto my tractor's forklift, and (very slowly) moved it over to our front door, and through it onto the floor of our still-under-construction mud room.  There we strapped it back to the hand truck, brought it into the front door, and wiggled it over to directly in front of the stairs to the second floor.  Now came the really, really hard part.  I got above the desk, on the stairs, and pulled on the hand truck's handles.  Scott got below the desk, and lifted up.  With a bit of coordination, a lot of straining, and much groaning and moaning, we managed to lift that up one stair at a time.  We rested between stairs.  Fourteen times we did that, and finally got it up onto the second floor.  Then we had one last challenge: the desk's smallest dimension was 30.5", and the doorway into Debbie's office was 29.5" wide after we removed the door.  The desk is made with a slab of black locust being held up by two pedestals containing drawers.  Between them is a 28" clear space.  So we laid the desk on its back side, on a piece of cardboard on the floor.  Then we skidded one pedestal through the door, rotating as we went, and then skidded the other pedestal through the door.  With this technique we had about 3" of clearance – made it!  And now the desk is standing in Debbie's office, undamaged.  Scott and I sustained all the damage that occurred during the effort! :)

Last night Debbie and I traveled down to Ogden with Cabo and Mako for their first puppy class.  It went well, and they really enjoyed meeting all the other puppies (all border collies!).  We're going to take just one puppy in the future, though – probably just Cabo.  Mako was very distracted by Cabo's barking when she was on the sidelines.

After the class, we stopped at Freddy's for a chocolate milk shake.  They were busy, and the service was slow.  I gave my order and just hung around, looking at the posters in the lobby.  I wasn't antsy at all, but after around five minutes of waiting, a middle-aged gentleman came out and introduced himself to me as the manager.  Then he told me he'd noticed how long I'd been waiting, and asked me if I was a veteran.  The chain was started by WWII veterans, and prominently displays its origins, so I wasn't completely surprised by the question.  When I answered in the affirmative, the manager said: “Then we owe you a meal - anything you want - on the house!” He said further that at Freddy's, they disliked making veterans wait.  Now that was a surprise!  But unfortunately I wasn't actually hungry, and told him so.  He then suggested that I get some “chicken tenders”, as they weren't that large.  Ok, said I, and wandered back out to the truck with the shakes we wanted, and a meal I didn't.  I'd never had chicken tenders before, so I had no idea want to expect.  The bag he gave me had five of them in it, each about the size and shape of a medium-sized pickle.  They were pleasantly breaded chunks of chicken, deep-fried (I think), and actually pretty darned good.  They came with some barbecue sauce I didn't even try; the chicken was tasty all on its own.

I slept reasonably well last night, I think because of the desk-related exertions :)
Posted by Unknown at (permalink) 9:34 AM No comments: