Paradise ponders: drones, antennas, and remembrance...  Today would have been my dad's 93rd birthday, were he still alive.  Debbie and I were out to dinner with friends (Gary and Elayne S.) last night, and on our drive dad came up in the conversation.  We were passing by some plants we didn't recognize, and Debbie commented that my dad would have known what every one of them was, whether it was native, what it's natural history was, etc.  And that led us into a conversation about my dad with our friends.  We miss you, Pater... 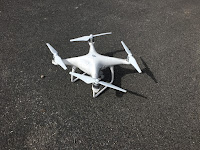 The contractor installing our sprinklers is working with a sub-contractor to map out the sprinkler head locations (there are just over 200 of them!) in a software app so he can price out our project.  It turns out that the county maps the app depends on are obsolete for our purposes (mainly because the irrigation canal was rerouted since the maps were last updated.  So our primary contractor engaged a fellow to take aerial photos of our place from a drone.  This fellow showed up around 10 am with his Phantom drone, zoomed it up to 700' high, and then got nice aerial shots.  The entire process took about 5 minutes.  He flew it from an iPad strapped into a controller, and it sure looked easy to do.  I don't have the results yet, but I'll post them when I do...

In between all the other goings-on, I installed the first (of two) antenna for the data link I'm putting up between our house and barn (where my office is).  I started with the house, which is the “master” of the pair.  The only part of the installation I've finished so far is the mechanical mount, which actually was very straightforward.  My little oscillating saw (at right) made cutting those holes through the siding for the mount's five feet easy. The first photo below is what the mount looked like after I installed it.  The actual antenna mounts to the gold colored mast, as you can see in the second photo.  The last photo just shows how high up that thing is.  I was at the very limit of what I could safely do on that ladder! 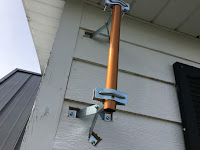 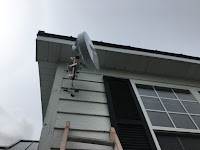 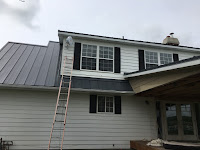 I'll be caulking all the wood I cut through to make it waterproof, then painting all that silver and gold colored stuff white.  I also have to install a ground wire, which will have a rather convoluted route in order to keep from traversing the steel roof.  Then comes likely the most difficult part of installation: getting the outdoor Ethernet cable through the house wall, without causing a leak, or a place for animals or insects to get in.  Part of this will involve snaking the cable through the wall of Debbie's office, where I'm not allowed to do anything ugly. :)

One consequence of installing gigabit Internet access that I didn't anticipate is that my existing routers can't keep up with the Internet feed.  It would be just plain silly to have gigabit Internet if I can't get that capacity to our devices, so I'm also going to have to upgrade our routers.  I'm using MikroTik routers, which I just love (so much easier to manage than Cisco routers!).  The one I chose has 13 gigabit ports, with 2 gbps overall throughput.  That's enough performance to do the job nicely, and enough ports that I can have a dedicated port for all of our computers – which means we'll avoid bottlenecking our switches (and I can keep those!).
Posted by Unknown at (permalink) 8:30 AM No comments: