Happy Labor Day!
Posted by Unknown at (permalink) 10:35 AM No comments:

The Bridge to Somewhere... 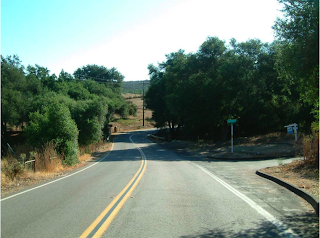 A couple of miles down the road from my home, on Lawson Valley Road, there's a little two-lane bridge over the Lawson Valley Creek. It's been inspected, and it's falling apart. So San Diego County is going to replace it.

Sounds perfectly ok, right? It's such an ordinary sort of thing for a Department of Public Works to do. You'd think they'd have pre-packaged plans for such a thing on the shelf, and all that would be required would be a little adjustment for the local circumstances. Get funding, take the tweaked plans, assign the right people and equipment, and then go build the bridge. Simple.

Ah, but you forget. There's a government involved. Simple, it seems, is just unacceptable.

On the San Diego County web site, there's a page for this project. There's nothing on it except for six links to PDF documents, which you can download (and if you live in Lawson Valley, I encourage you to do so). The documents include:
Some of this government-speak must be translated for us normal humans. The CEQA is the California Environmental Quality Act. A Mitigated Negative Declaration is a document saying that a project has potential environmental impact, but they're going to be addressed by actions (the “mitigations”) that are part of the plan – so in the end there will be no environmental impact.

A question that immediately occurs to Lawson Valley inhabitants who live east of the bridge (that includes me!) is this: how the heck are we going to get in and out of the valley while this new bridge is being built? And how long will that take?

Well, the plan says that building the new bridge will take 18 months (really?), and that one lane will remain open while they build it. 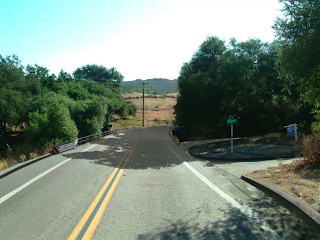 The image at right is from the 36 page Visual Impact Assessment. It's the same as the photo above, but the new bridge is shown. I'm not sure how they made this – it could be an artist, or it could be some kind of computer-generated thing. In any case, someone went to a great deal of trouble to produce it. Then they never showed it to any of the people to whom it might actually matter, like the inhabitants of Lawson Valley. I only found this by accident, and the review period was up weeks ago. You'd think if they were going to go to all this trouble, they might have done something obvious like mail it to us denizens. Sheesh!

In any case, you can see that they're going to straighten the road just a bit. There are more modern-looking rails and the crash-absorbing “bumpers”. It's just a silly little bridge.

I'm still having trouble absorbing the notion that we taxpayers had to pay for a Visual Impact Assessment. This one was made by Vicki Estrada, of Estrada Land Planning. I'm afraid to ask what it cost – and even more afraid of what this cost is multiplied by the hundreds of projects across the county... 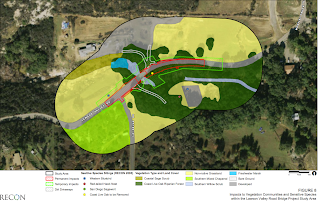 By comparison to the preceding, the 17 page Water Quality Report is a model of brevity and conciseness. Even so, its actual content could easily be distilled to just a few sentences. Basically, it says that the new bridge will not have any significant impact.

Doesn't this seem like an awful lot of time and trouble (and money!) considering that we're talking about a teeny little country two lane bridge? In the end, all these studies and reports accomplished nothing whatsoever that I can see – the county is going to build a new bridge just as it would have done without the studies. A few “best practices” guidelines – like businesses use every day – would have covered things like erosion mitigation and recovery planting. This just seems horribly excessive, and a case of bureaucracy trumping common sense. These sorts of studies are the kind of thing I'd expect if you were going to build another Coronado Bay Bridge – and then I'd be lauding them for taking proper precautions. But for a little country bridge? Come on, folks...

First, it appears that the medical opinions asserting that Al Megrahi would likely die within 3 months were bought and paid for by Libya. On Al Megrahi's initial examination, doctors gave him 10 months or more to live. That just wouldn't do, you see, because Scottish law allows release on compassionate grounds only when the prisoner has 3 months or less to live. This was not an obstacle to the Libyans, who simply found more, er, understanding doctors. For a fee, of course. Read all the disgusting details here.

Second, we discover today that the U.K. government has been keeping Obama informed about Al Megrahi's release every step of the way. There were no surprises for Obama. And there were no vehement protests or objections beforehand – those came only when the Obama administration was surprised by the American reaction to Al Megrahi's release. Read all the despicable details here.

Sidenote: all the investigative reporting seems to be coming out of England. Note to U.S. newspapers: have you noticed that the U.K. newspapers are actually making money, while (as we, at least, have noticed) you're going broke? Do ya think that maybe, just maybe, the fact that the U.K. papers actually do some real reporting might have something to do with it? Just sayin'...

I have a little vignette that keeps running through my mind, wherein someone in the White House receives a call from 10 Downing. The caller (presumably a Prime Minister's functionary) says “Good morning, chaps! Just wanted to let you know that we're about to release the Lockerbie bomber, that Al Megrahi fellow. Heads up, as you say.” And the response is something like “Top of the day to you, George. Thanks for letting us know. We have no problem with that.”

It's that last bit that is really gnawing at me. What sort of American would think that releasing Al Megrahi to the Libyans was ok?

Houston, we have a problem...

Obama and the Left...

Jane Hamsher isn't the sort of blogger you'll find me quoting (or linking to!) very often. She's a prominent leftie blogger, a confirmed and vocal “progressive” whose politics are somewhere to the left of Lenin's.

If these groups, if these liberal leaders, let Jones just hang there while Glenn Beck pounds his chest and celebrates the scalp, we have no liberal institutions. What we have are a bunch of neoliberal enablers who have found a nice comfortable place in the DC establishment that they don't want to jeopardize, a place on the new K-Street gravy train that they don't want to lose. Dropping Van Jones from their rolodex is a small price to pay.

If there is going to be a serious progressive movement in this country capable of standing up for health care against an industry that spends $1.4 million a day on lobbying, we can't just look to the members of the Progressive Caucus and say "hey, you, get something done." They need cover. They need to know that they will be supported. And people like Van Jones who have given their lives to causes we say we value like prison reform and environmental advocacy need to know that they will be defended, and not handed over to Glenn Beck as an acceptable casualty in the battle for K-Street dollars.

So to all you liberal organizations in the "veal pen" -- this is your moment of truth. I get all your emails. And the next Common Purpose meeting is probably on Tuesday. If you can't get it together to at least put out a statement of support for Van Jones and condemn the White House for using him as a sacrificial lamb to right wing extremists that will devour us all if left unchecked, it's time to add "proudly liberal only when it doesn't matter" to your logo and be done with it.

Looks like the Obama rose doesn't look quite so good to the lefties any more...

Posted by Unknown at (permalink) 4:56 AM No comments:

From the wit of Mark Steyn:

But to this future of vast, unstoppable, ever-expanding wealth, the champions of the oppressed have come up with an ingenious solution: global poverty! We need a massive Poverty Expansion Program if we're to save the planet. "I don't think a lot of electricity is a good thing," says Gar Smith of San Francisco's Earth Island Institute. "I have seen villages in Africa that had vibrant culture and great communities that were disrupted and destroyed by the introduction of electricity," he continues, globally warming to his theme and regretting that African peasants "who used to spend their days and evenings in the streets playing music on their own instruments and sewing clothing for their neighbours on foot-pedal powered sewing machines" are now slumped in front of "Dynasty" reruns all day long.

George Monbiot, celebrated doom-monger of Britain's Guardian, agrees: "It is impossible not to notice that, in some of the poorest parts of the world, most people, most of the time, appear to be happier than we are. In southern Ethiopia, for example, the poorest half of the poorest nation on Earth, the streets and fields crackle with laughter. In homes constructed from packing cases and palm leaves, people engage more freely, smile more often, express more affection than we do behind our double glazing, surrounded by remote controls."

In Ethiopia, male life expectancy is 42.88 years. George was born in 1963. That may be why the cheery peasants in the fields are cracking up with laughter. They know that even if he moves in tomorrow, they'll only have to endure his column in The Gamo Gofa Times-Herald for another year or two. No wonder they're doubled up and clutching their sides. It's not just the dysentery from the communal latrine.