Not quite as she remembered them...

Not quite as she remembered them...  My mom sent me a little collection of slightly revised fairy tales.  I tracked down the source, which includes both the original and the revised versions.  Here's one example:


Georgie Porgy pudding and pie,
Kissed the girls and made them cry.
And when the boys came out to play,
He kissed them too 'cause he was gay.

Posted by Unknown at (permalink) 12:11 PM No comments:

2013 Wastebook is out...  Every year, Senator Tom Coburn puts out his “Wastebook” – a list of noteworthy Federal fiscal wastefulness.  One example from the 2013 edition:

In January 2013, Congress passed a bill to provide $60.4 billion for the areas devastated by Hurricane Sandy.  However, instead of rushing aid to the people who need it most, state-level officials in New York and New Jersey spent the money on tourism-related TV advertisements.

Posted by Unknown at (permalink) 10:37 AM No comments:

13 things mentally strong people don't do...  This turned out to be a much different, and more interesting list than I expected.
Posted by Unknown at (permalink) 10:33 AM No comments:

Teamwork is overrated...  I agree.
Posted by Unknown at (permalink) 10:30 AM No comments:

Polynesians may have invented binary math...

Polynesians may have invented binary math ... centuries before Leibniz.  But it doesn't look as though we're likely to ever get conclusive proof of this...
Posted by Unknown at (permalink) 10:28 AM No comments:

Compulsory bug bounties?  This is an interesting idea with the objective of fixing a problem that Bruce Schneier has often referenced: the need to make software companies (financially) liable for the security bugs in their products.  That's the only way to get software companies to prioritize fixing those bugs.  The pricing would need to be worked out in such a way that it was simultaneously effective – but not inhibitory – for both large, mature companies and for startups.  Here's the original paper looking at the idea.
Posted by Unknown at (permalink) 10:25 AM No comments:

Really?  To fix the ObamaCare web site, you hire the web technologies executive from the company that has most famously failed to leverage web technologies for its own business?  As the political chattering class would say, the “optics” of this choice are awesomely bad.  But, on the other hand, That One is still using a Blackberry...
Posted by Unknown at (permalink) 10:10 AM No comments:

Send out the clowns...

Send out the clowns...  Via my mom, who found this quite amusing...
Posted by Unknown at (permalink) 10:05 AM No comments: 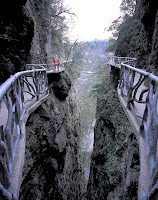 Eleven cliff paths...   I've never been on any of them, but I'd sure love to!

The closest I've ever come to an experience like this is on my all-time favorite hiking trail: the Awa'awapui Trail/Nualolo Trail loop on the island of Kauai, in Hawai'i...
Posted by Unknown at (permalink) 10:03 AM No comments:

It's a man's world, and always will be...  That's the title of Camille Paglia's opening statement at this year's Munk Debate.  Her conclusion:


After the next inevitable apocalypse, men will be desperately needed again! Oh, sure, there will be the odd gun-toting Amazonian survivalist gal, who can rustle game out of the bush and feed her flock, but most women and children will be expecting men to scrounge for food and water and to defend the home turf. Indeed, men are absolutely indispensable right now, invisible as it is to most feminists, who seem blind to the infrastructure that makes their own work lives possible. It is overwhelmingly men who do the dirty, dangerous work of building roads, pouring concrete, laying bricks, tarring roofs, hanging electric wires, excavating natural gas and sewage lines, cutting and clearing trees, and bulldozing the landscape for housing developments. It is men who heft and weld the giant steel beams that frame our office buildings, and it is men who do the hair-raising work of insetting and sealing the finely tempered plate-glass windows of skyscrapers 50 stories tall.

Every day along the Delaware River in Philadelphia, one can watch the passage of vast oil tankers and towering cargo ships arriving from all over the world. These stately colossi are loaded, steered and off-loaded by men. The modern economy, with its vast production and distribution network, is a male epic, in which women have found a productive role — but women were not its author. Surely, modern women are strong enough now to give credit where credit is due!

Alas, Camille was on the losing side...
Posted by Unknown at (permalink) 9:02 AM No comments:

What politicians do best!


What politicians do best!  That's what my wife said when she heard this ad, and it's conclusion: “You looked us in the eye, Senator Udall, and you lied.”

The old fart torch has been passed... 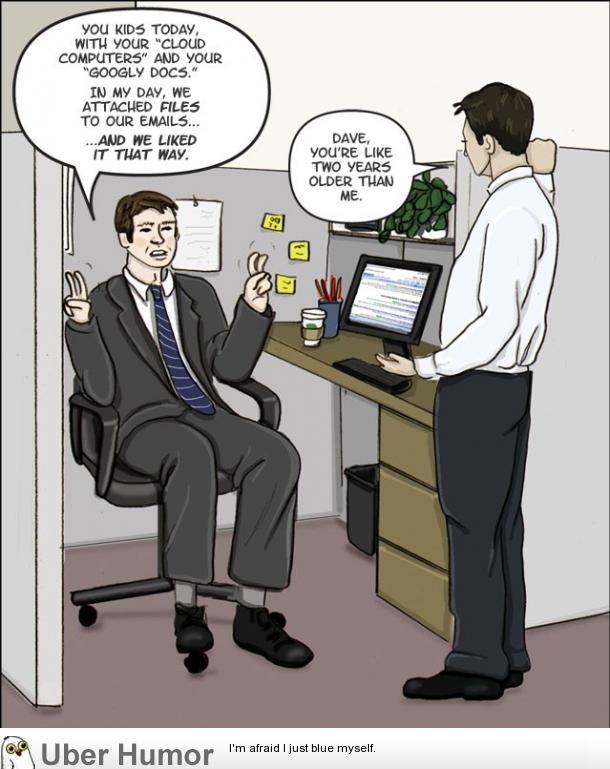 The old fart torch has been passed...  So says friend, former colleague, and Idaho mogul-of-everything Doug S., as he passed this cartoon along.

The speed of information technology's advance makes for some disconcertingly wide gulfs between the experiences of someone as ancient and venerable as I, and the younger engineers just starting out.  These gulfs have been the subjects of many posts here over the years.  Yesterday, I got fodder for yet another.  In an email conversation, I mentioned to a young acquaintance, a software engineer in his late 20s, that it still felt “new” to me to be writing code in a modern IDE (for my non-geek readers, that stands for Integrated Development Environment, and programmers it's sort of like using a modern word processor instead of writing code with paper and pencil).  My correspondent's reaction: “They didn’t always have IDEs?  How could you write a program without one?”  He wasn't trying to be funny – he really couldn't imagine how one could possibly write software without an IDE.  When I explained to him what we did do, I don't think he believed me :)
Posted by Unknown at (permalink) 8:38 AM No comments:

Pater: handwriting...  At right, my dad is standing under a large piece of machinery called a “lumber load mover”, inside the Collins Pine Museum in Chester, California, on our trip to Mount Lassen National Park in June 2007.  This is a private museum, run by a sawmill company – not the sort of place you'd think would attract my dad.  But when he ran into a forestry botanist during our visit, we ended up spending several hours there, mostly talking about the patterns of conifer distribution in the area, and especially where we could find large, old-growth cedar specimens.  This made my dad's day, which was shortly made even better when we followed it up with a big bowl of wor wonton mein soup!

I'm starting to run low on topics for these posts about my dad, so this will be the last of the daily posts.  I'll keep writing them, but a bit less frequently.  Any friends and family with memories they'd like to see written up – please remind me of them!

My dad made lots of notes while in the field, or at his customer's locations.  He generally preferred to type his notes up, usually on the evening of the day he made them, or upon return from a trip.  This was both because his handwritten notes were really more just reminders of something he wanted to elaborate on later, and also because his writing wasn't particularly legible – even to himself, after the fact. These are also habits of mine, though these days I'm more likely to take my rough, “reminder notes” on a mobile phone or by typing them into a plain text file.

Ten years or so ago, I started collecting old records and photographs from my family's past.  The vast majority of the trove I've put together came from the effects of my uncle Donald Dilatush (my dad's brother).  These included quite a few documents and photos from his parents, Grace and Earle Dilatush (my grandparents).  Amongst these collections were just a few letters and postcards written by my dad during his WWII Army Air Force days – either he didn't write home very much, or his letters didn't get saved.  The content of these was entirely unremarkable, but the first one of these that I saw (a postcard sent from Scott Army Base in Illinois) was a real shocker – because the handwriting on it looked exactly like my own.

This discovery prompted a long evening's conversation on one of the trips I took with my dad, and some informal “tests” we made to try to verify my discovery and to try to understand how it could be.  Neither of us used conventional cursive handwriting, though both of us learned cursive handwriting in school.  Instead, we both hand printed our letters – and both of us freely mixed upper and lower case letters (and we both used “small caps” style to distinguish upper and lower case letters when printing them all in upper case style).  We both wrote small letters, small enough that we were used to getting comments about how tiny our writing was.  Neither of us could remember ever being taught how to print.  And of course, my dad went to school in the '20s and 30's, 30 years before me – with different schools, different curricula, and different teachers.

Yet our hand printing was undeniably strikingly similar.  Both of us were surprised at just how very similar our styles were – so similar, in fact, that both of us would instantly identify the other's writing as our own.  This is what shocked me when I saw that postcard from my dad – for it looked as though I had written a postcard in the '40s, before I was even a gleam in my dad's eye.  My dad's reaction to seeing my writing was very similar – he found it quite disconcerting to see someone else duplicate his writing so precisely.  I suppose we all think our writing style is something very personal, something unique to ourselves – like our face, or our voice.

The exact genetic mechanism hasn't been worked out, but the speculation is along the same lines I mentioned earlier: heritable traits that affect handwriting.  Things like bone structure, joint conformation, and nervous system performance have all been mooted as possibilities, but as far as I know none of these have been directly linked.  I think nobody really knows what the genetic mechanism behind handwriting similarity is.  The modern books on the subject are still in copyright, and I can't post them here – but some of the older ones are available online.  Three examples: here, here, and here.

If you stood my dad and I next to each other, I don't think you'd have the slightest suspicion that we were related.  On the other hand, people constantly notice the resemblance between my mom and I.  In a family as irreverent as ours, this has been the source of a considerable amount of teasing over the years :)  But my handwriting provides a piece of slightly subtler evidence of my paternity, and it's one that is to me even more striking – and unexpected – than facial resemblance.  Somehow it makes me happy now, that every time I write something by hand, what shows up on the paper looks like something my dad wrote...