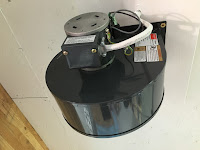 Paradise ponders, take three...  So much happening today!  After our goose adventures (I was right - those baby birds have been identified as Canadian goose goslings), I went back out in the barn and finished up all the work on the first floor.  The mounting plate is now complete, the fan is attached, and the fan is wired up.  That's it at right, in place and ready to go.

After I finished with that, I went to work spraying (for dandelions and other broad-leaf weeds).  Given that the dandelions in our front yard look like cabbages ready for harvest, it's about time!  But this is really the first day that weather allowed it.  I first did the (about) 3.5 acres of our yard, including the acre or so on the highway side of the irrigation canal.  Then I went over to our neighbor Alan L.'s house and did his (about) 2 acres.  This was after eating a “Debbie special” pasta lunch that nearly put me in a carb coma.  My sprayer is towed behind my ATV, so I had four hours worth of shaking and vibrating to help settle that lunch :)

Then after I knocked off for the day, our neighbors to the east of us (Gary and Elaine S.) called us to ask if we'd seen any goslings!  It seems that the pair that's been nesting in a tree near our house showed up at their pond, with just two goslings.  When I told them about the four that I'd captured, much excitement ensued until we figured out that the ones I caught were a lot older than the two they saw – the ones in their pond had pretty clearly just hatched, whereas the ones I captured were around two weeks old.  There really should be more than two of the little goslings, though, so we're all afraid something happened to the others on the way to Gary and Elaine's pond.  Their pond is over a quarter mile and across a highway from the nest – how the mom got even those two goslings over there is a mystery to us.  All the more so given that both Gary and I were in our yards working all day – it's hard to believe we'd miss the gosling procession!

Now Debbie and I are about to go deliver a lemon pie to Tim and Jeannie D.  Debbie baked two of them today, one for us (now almost gone, because Gary and Elaine had a piece :)  and one for Tim and Jeannie...
Posted by Unknown at (permalink) 6:03 PM No comments: 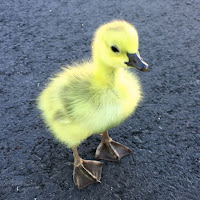 Paradise ponders, cont'd...  So just a little while ago I was walking from our shed to our house, talking with my mom on the phone, when I spotted this little thing at right.  It's either a duckling or a gosling; from the size alone I'm going to say gosling (he stands about 8" high).  I searched around but couldn't find any more babies, nor could I see (or hear) any parental units that might be missing a baby.  Next thing I know this little guy heads for our back yard – where Race and Miki waited for him, slavering with anticipation.  That did it for me: I scooped the little feller up and called Debbie for some help.  We got him in a box with a towel and some water, and contemplated what we should do next. 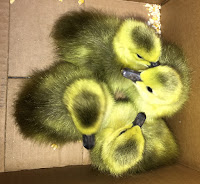 Debbie had the brilliant idea of calling Michelle H., who we knew had a bunch of animal-loving kids, and who had a lot of bird care experience (she and her family have raised chickens, ducks, geese, and emus).  She eagerly accepted our offer of a duckling, and headed over to our place to pick it up.  When she arrived, we were standing at our doorway talking when Michelle drew in her breath and said “Look!  Two more!”  I ran out and captured them, and then we all undertook a thorough search.  I found a fourth one in our canal, just north of our property line.  That one took some doing to capture, and he was squawking like mad when I finally got him.  If there were any parental units around, that racket would have brought them running.  These four (and hopefully no more) were orphaned somehow.  Michelle took them all, and told us she was going to put them in with the emu eggs they're currently incubating – and then tell her kids these are baby emus.  She wants to see how long it will take them to figure it out :) 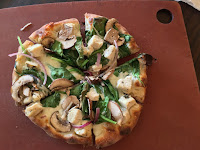 I neglected to mention earlier that we had gone to Jack's yesterday afternoon.  As usual, we had wonderful meal – fire-roasted tomato soup (wonderful stuff, that is!) and I had a “Cache” pizza (at right; roasted chicken, mushrooms, lots of mozzarella, spinach, onions, and a lovely white sauce.  Afterwards we went up to Aggie's creamery and had a decadent ice cream cone.  Stuffed, we went for a drive up Logan Canyon, taking the first right to explore something new for us.  We saw no wildlife other than a brief glimpse of an American Dipper, but I did see bazillions of plants that look like they're going to be wildflowers.  Several hillsides we drove by were quite densely covered.  I'll be out there again in a couple of weeks to check that out!

Before I got on the phone with my mom, I completed the next step in the heating system: installing the wooden tube and it's yoke on the second floor.  In the first photo you can see it in the hole, where it nestled perfectly in the mounting plate installed below it.  In the second photo you can see the yoke I built around it, so that I could nail it to the floor while covering that 1/2" gap I'd cut.  I used the nail gun (the yellow-and-black tool in the second photo) to do all the nailing.  This is the first non-trivial nailing that I've done with it.  The 2" nails I used to hold the yoke to the floor were effortless to drive, and wonderfully accurate.  There was the additional benefit of not hitting my thumb with a hammer :)  I used 1" nails driven at an angle to attach the tube to the yoke, and that also went very easily.  I think I'm gonna get attached to my nail gun! 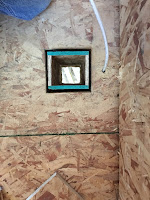 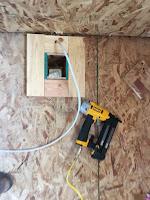 Early this morning I went to Lowe's to pick up a few supplies for this part of the heating system construction.  While I was loading my truck with the stuff I'd bought, I noticed a big, healthy-looking black Labrador Retriever running around the parking lot, whining as if in distress.  He looked like he was searching for something; his owner, I imagined.  I called to him and he came right over to me, let me hold him by the collar.  He had a tag with his name (“Buddy”) and a telephone number, so I called it – but it was disconnected.  Dang!  So I walked inside the store (I was the only customer at that hour) and hailed the first employee I saw, a young woman.  I told her what had happened, and she went into action immediately – grabbed a rope to tie him up with and told me all the steps she was going to take.  First call would be to the shelter, where they'd have him checked for a microchip.  If that didn't work, the shelter would put him up while they searched for the owner.  Lowe's would put up a sign.  All of this was part of their new employee training, the woman told me.  Kudos to Lowe's – that's a really wonderful way to handle this sort of problem, and even better to train all their employees to do so.  I left feeling pretty good about Buddy's prospects...
Posted by Unknown at (permalink) 10:27 AM No comments:

Paradise ponders...  We're worried about Mo'i this morning.  He's our 17 year old field spaniel, and he's been in a slow decline for a couple of years now.  Until yesterday afternoon, he's needed diapers and frequent cleanups of “accidents”, but otherwise he's given every indication of still enjoying his life.  He's been able to walk around, to go outside and enjoy the yard, etc.  Most especially, he's enjoyed eating – that's always been Mo'i's main pleasure.  Yesterday afternoon we saw that he was having trouble standing and walking, even with good traction out in our yard (our kitchen is trickier because of the slippery tile floor).  This morning he looked even sadder.  We're going to get him into the vet to make sure there's nothing fixable, but ... we suspect we're near the end of the time we can keep him comfortable and happy.  We expected this day to come a couple years ago, so he's had more of a good life than we ever expected – but somehow that still doesn't make the day of reckoning (or the anticipation of it) any easier...

Yesterday was a busy day around here.  In the morning I took the next few steps on getting the heating installed for my new office in the shed.  The first challenge was to cut a rectangular hole in the floor of the second floor that exactly matched a rectangular hole I'd already cut in the ceiling of the first floor (got that?).  It took me a while to come up with a solution, but here's what I did.  I took a long “jobber bit” for my drill and put the shaft in one corner of the hole in the first floor ceiling, aiming straight up.  Then I used a torpedo level to get the shaft precisely vertical – and then drilled the hole.  That's the hole you see at the upper right in the first photo below.  From there I measured out a rectangle 1/2" larger in every direction than the one below.  After that I used my oscillating saw to cut out the floor, and when I pulled out the piece I cut – there was my other hole, right where it should be (third photo)!  Success! 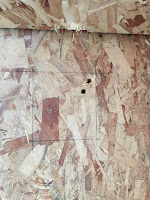 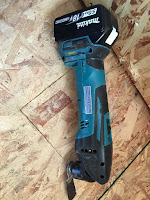 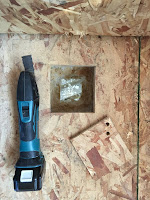 That oscillating saw is right up there on my personal list of the greatest inventions in the history of the world – in the same company as chocolate ice cream, willing women, dogs, wildflowers, assembly language, and tractors.

The next step was to build a “tunnel” to conduct the air from the first floor to the second floor (being pushed by a blower that will be mounted on the ceiling of the first floor).  I made this with four pieces of OSB simply glued up.  You can see it in clamps below.  The soft mallet visible in the second photo is what I used to “bonk” the pieces into the right place once I had the clamps tight.  Force, applied carefully, does wonders for woodworking.  And management :) 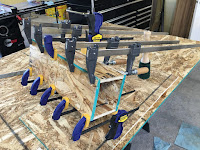 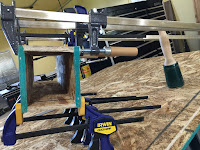 Around 1 pm my brother Scott dropped in, and we spent the afternoon spreading some wood chip mulch around.  This is the first time I've used the wood chips that I made with the Wallenstein chipper/shredder I bought almost two years ago.  They looked very nice to me, and I was pleasantly surprised to find that I could easily move them with a shovel.  Scott told me that it was the nicest wood chip mulch he's ever seen – but he tends to the hyperbolic in both his praise and his scorn, so I'm not too sure how much to read into that :)
Posted by Unknown at (permalink) 7:24 AM No comments: