Interlude: Deer at the Cabin...

As I was pulling on my clothes this morning, getting ready to walk the dogs, Debbie called out from the kitchen that there was a deer right next to the cabin.  I came out into the kitchen and there it was, a healthy young buck, 30' or so from the cabin's front door!

The front door is all glass, so all four of us (Debbie, me, and the two dogs) stood there and just watched for a while.  The buck was largely unconcerned, though alert.  His ears were rotated straight toward us, and he frequently popped his head up and looked in our direction.

Meanwhile, the dogs, while obviously interested in the deer, were telling me with their body language that we'd better get outside pretty darned fast – or there'd be a mess to clean up.  So I got my shoes on, leashed up the dogs, and we opened the door.  The buck mosied up the hill 10 yards or so and stood there looking at us.  Race found a position where he could pee and watch the deer at the same time.  Miki, on the other hand, took off straight up that embankment you see in the photo – and did a good job of trying to haul me up right after him!  When Race finished his business, he joined Miki in the geezer-hauling business, and with the two of them helping, I practically flew up that hill.  The buck just loped along effortlessly ahead of us, seeming a bit curious about this group of crazed animals trying to follow it.  The dogs had such a strain on their leashes that I'm pretty sure I could have played them like a guitar string – but I was far too busy trying to stay upright to try that!

About 100 feet up the slope, we all ran out onto a road cut above the cabin.  My legs were rubber, I was gasping (remember, this is at 11,000'), and I was feeling a bit dazed (this is all before my morning tea).  I had lost track of the buck in my efforts to stay alive, but the two dogs were pointing straight at it – about 50' away, slightly downhill, on the other side of a big snag.  Now that I was on firm ground again, there's no way I was going to try going through that!  So the dogs and I had a battle of wills, while the buck munched unconcernedly.  I swear it was laughing at us :)

I finally got our reluctant dogs to turn around and head back to the cabin, via the road this time.  I was still gasping for breath and struggling to control my walking by the time we got back to the cabin.  You'd never know the dogs were working hard at all.

We wonder what our silly dogs would have done had they ever gotten near that buck.  Miki the wonder-coward would probably have tucked tail and come back to hide behind us.  Race, bred for herding but never trained, would probably just chase that buck, to New Mexico or some other distant place... 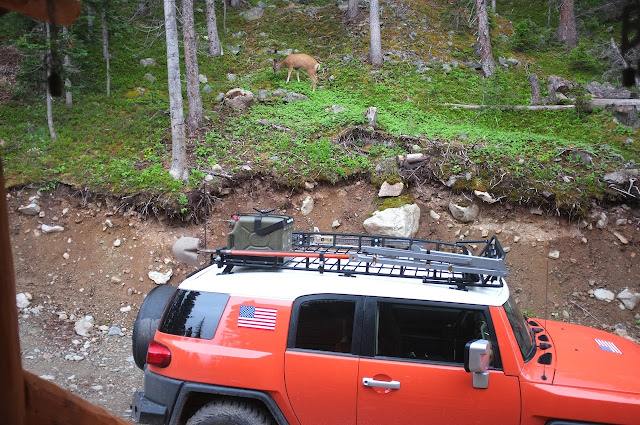 Posted by Unknown at (permalink) 6:15 AM No comments: