One of the Many Reasons... 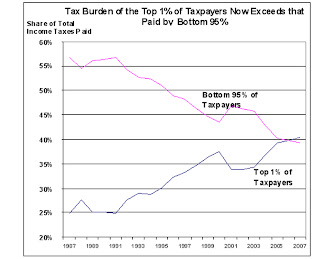 This is one of the many reasons why we need a revolution at the polls. We need to throw all of these bums out on the street – Democrats and Republicans alike – and replace them with a new crew that's less fiscally insane.

Take a look at what the past few administrations and Congresses have done to our tax system. Even while the lefties are fostering the meme that the “wealthy” (a very, er, flexible term that is, in progressive hands) aren't paying enough taxes, here are the actual facts: the U.S. now has the most progressive federal taxes amongst all developed nations.

“Progressive” in this context means that the more money you make, the higher the percentage of your income you pay in taxes. For the last couple of decades, it has also meant something else in the U.S.: if your income is below a given amount, you “pay” negative taxes – you get a check from the government instead of the other way around. This welfare is euphemistically called the Earned Income Credit, and of course the money for it comes from taxpayers with higher incomes – the money is being taken from them and given to the “poor” (many of whom make over $40,000 per year).

Scott Hodge has a short post over at the Tax Foundation's blog. He notes:

Some in Washington say the tax system is still not progressive enough. However, the recent IRS data bolsters the findings of an OECD study released last year showing that the U.S.—not France or Sweden—has the most progressive income tax system among OECD nations. We rely more heavily on the top 10 percent of taxpayers than does any nation and our poor people have the lowest tax burden of those in any nation.

Many states (including California, where I live – currently) have progressive income taxes as well, making this situation even worse.

It's not free money, folks. Those people paying the higher tax burdens are not going to do nothing while their hard-earned incomes are stolen. The easiest thing for an oppressed minority to do is to simply leave – and that's a lot easier when you have financial resources. It's happened before (think Sweden and England in the 20th century) and it's already happening now – the “wealthy” are leaving the states with the most progressive taxation policies (Maryland, Michigan, etc.) and headed for the states with the most regressive tax policies (Florida, Nevada, etc). The internal immigration figures for the past few years demonstrate this rather clearly. And, though my wife and I are far from “wealthy” even by the Obamanation's flexible definition, we're starting to think about such a move ourselves – in no small part to escape the stifling total tax burden in California (said burden here comes complete with unrivaled fiscal irresponsibility and insanity as well)...