The Bird in the Bluegrass...

Just watch it through, even if you don't like bluegrass music (what's wrong with you?).  Linking because the stupid thing autoplays. Via my lovely bride...
Posted by Unknown at (permalink) 8:14 AM No comments: 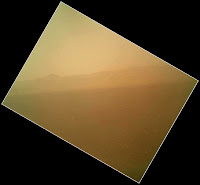 I've learned that it will be at least a week (and likely more) before all of Curiosity's instruments are “unpacked”, calibrated, checked out, and declared ready for action.  Some of Curiosity's many cameras are already able to work, and photos from them are starting to come in.  At right (click to enlarge) is an interesting one, taken from a camera located on the instrument boom.  The boom is currently in its stowed position, and is rotated (hence the funny tilt to the photo).  The camera isn't even fully deployed yet – its lens is covered with a transparent dust cover, and that cover is full of ... dust.  So this, the very first color photo returned from Curiosity on the surface, is taken through a film of dust, as though it's lens were very dirty.  It's showing the rim of Gale Crater, which Curiosity is sitting inside of.  Other (black and white) photos returned show Mt. Sharp, the giant mountain inside Gale Crater whose flanks are the primary target of Curiosity's mission.  There are many more photos available in the Curiosity image gallery. Also released is the amazing photo at left (click to enlarge), the result of an astonishing piece of wizardry on the part of the folks at JPL.  Whizzing in orbit around Mars is the Mars Reconnaissance Orbiter (MRO), which has been there since 2006.  The imaging gurus there figured out exactly where and when Curiosity would be entering the Martian atmosphere, then told MRO to aim at that patch of sky at precisely that time.  It's a bit like riding in a supersonic airplane with telescopic camera while taking a photo of a satellite whizzing 300 miles over your head.  But the JPL imaging wizards pulled it off, and this photo is the result.  At the top, you can see Curiosity under canopy, descending at about 200 MPH.  At the bottom, you can see the heat shield (which had separated from Curiosity when the parachute was deployed), still in free fall.  Awesome!

The little video below was also released, a kind of teaser for the real deal that's coming in a few weeks.  While Curiosity was descending, a special camera called the Mars Descent Imager (MARDI) was able to start taking photos.  It's a 1,600 x 1,200 pixel camera that took images at about 5 frames per second from the time the heat shield was released until touchdown.  This video was constructed from a small sampling of thumbnail (200 x 150 pixel) photos.  Over the next few weeks, the entire sequence of high resolution photos will be returned, and a high resolution video will be constructed from it.  One interesting note about this camera: NASA dropped it from the mission at one point, and Malin Space Science Systems (a San Diego company) finished it at their own expense – at which point NASA agreed to put it back on the mission plan.

A whole passel of 'em! 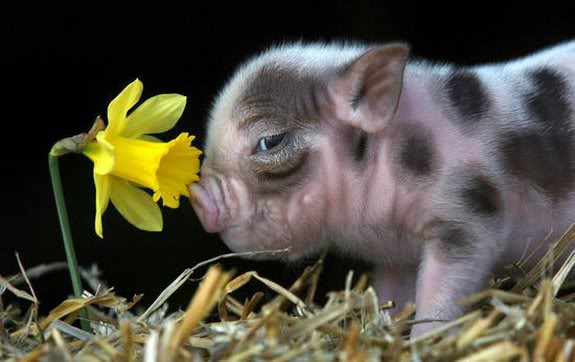