Happy Flag Day!  Via my lovely bride with the torn meniscus...
Posted by Unknown at (permalink) 2:41 PM No comments:

Quote of the day...  From Glenn Reynolds, aka Instapundit:


If I were Romney, I’d run for President again, with bumper stickers that just say “I fucking told you so!”

A morning in Paradise...

A morning in Paradise...  Debbie's getting stronger, and having less pain, every day.  This morning she looks like she could get up and go for a walk.  I think it's only the meniscus tear stopping her, and that should get fixed in the next week or so... 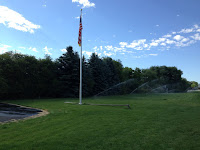 My job for this morning was to set up the irrigation for the strip of lawn along the east side of our property.  This is about three weeks later than last year, as we've had so much rain the past month.  But it's time now!  The pipes have been stacked on the ground for the past 8 months, so they're full of dirt, leaves, and dead voles.  After I laid all the pipe out, I left the end plug off and blasted water through the pipes to clean them out.  Then I put the plug in, turned on the water, and discovered that I had four plugged sprinklers (out of 12).  Not too bad.  Fixed them, but then discovered that the last pipe's gasket was gone, so tons of water was leaking around the end plug.  Turned off the water, put in a new gasket, turned the water back on, and voila!  We've got irrigation (photo at right, click to embiggen)!  I'll be using this roughly weekly for the next four months or so.

At the end of this exercise, I was soaking wet from unplugging the sprinkler heads.  To get dry, I rode my ATV up and back a farm road near our house, the same one we go walking on – except I took the road all the way to its end.  I discovered that we've been walking on the worst part of the entire road!  As soon as Debbie's good to go walking again, we're going to change that.  The last 3/4 of a mile of that road are a gorgeous walk through rolling fields, right now planted in a grain I don't recognize and alfalfa.  The alfalfa is in bloom; looks like the farmer's late in cutting it.  The last part of the road (middle photo) is overgrown with alfalfa, but still easily passable.  Along the way I saw two pairs of quail, a species I don't know with prominently rusty brown coloration.  No chicks, dang it!  I also got a closeup view of a meadowlark, plus I flushed a red fox out of that alfalfa field.  I think he was hunting voles :) 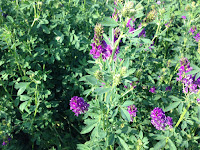 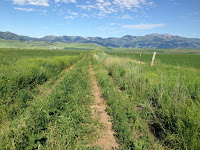 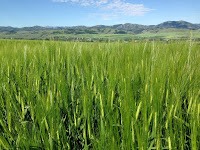 Posted by Unknown at (permalink) 9:00 AM No comments:

Your morning glurge...  More here...
Posted by Unknown at (permalink) 6:03 AM No comments:

It's lovely ... when one gets a good night's sleep, isn't it?  And it's a lovely morning here in Paradise.  People all around me are setting up their irrigation lines for the first time this year, and that's exactly what I'll be doing in just a little while myself...
Posted by Unknown at (permalink) 6:02 AM No comments:

Yes...  That phenomenon is completely unknown here.  I haven't seen the saggy pants even once.  I asked my neighbor about that once, and he said “Now why do you think God gave the Mormons shotguns and backhoes?”
Posted by Unknown at (permalink) 4:53 AM No comments: