The 2012 elections are going to be interesting... 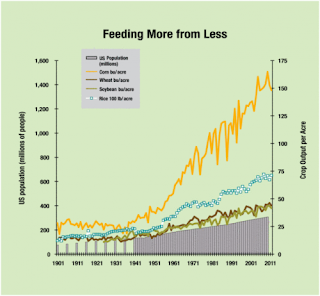 The graph at right (click to enlarge) is a fascinating look at what invalidated the Malthusian prophecies of the early 20th century.  Back then, the conventional wisdom was that because human populations were growing much faster than our food production, we were all going to starve and die before the year 2000.

Well, not so much.  In fact, there is now more food per capita than at any previous point in history.  Better food, too (in every sense!).  How did this happen?  Why were the projections so very wrong?

They had the same problem that every static projection has: they assumed that the rate of change of both food production and of population growth would remain the same.  If that had actually happened, the Malthusians would have been correct.  But it didn't; in fact, both changed.  Our food production started climbing very rapidly during WWII with the near-simulateous development of cheap fertilizers, effective insecticides, and selective herbicides.  A few decades later, genetic engineering kicked farm productivity even faster.  There's no end in sight yet for farm productivity improvement.  At the same time, worldwide population growth rates are slowing.  The rate of change on those rates is low, but the effects are cumulative and large over the long term.  Most experts today think that our world's human population will level off (or close to that) before the end of this century.  My guess is that today's experts are probably just as wrong as the Malthusians were 100 years ago – but I have no idea in which direction they're wrong, much less the magnitude of their error!
Posted by Unknown at (permalink) 4:34 AM No comments:


A drunk woman, stark naked, jumped into a taxi.

The Indian driver opened his eyes wide and stared at the woman. He made no attempt to start the cab.

"What's wrong with you, haven't you ever seen a naked woman before?"

"I'll not be staring at you lady, I am telling you, that would not be proper, where I am coming from."

"Well if you're not bloody staring at me, what are you doing then?"

"Well, I am looking and looking, and I am thinking to myself, where is this lady keeping the money to be paying me with?"