An awesome image from APOD: 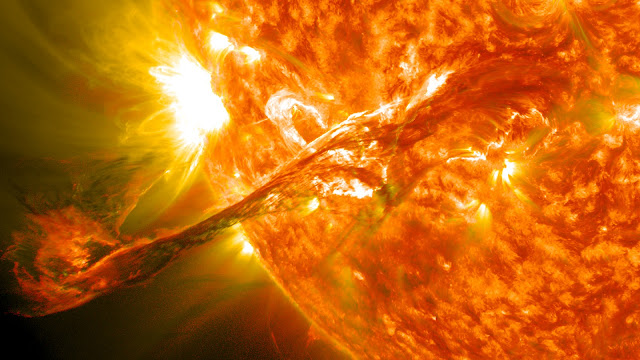 In an article titled The Return of the Ugly, Racist Pseudoscientist with a Small Penis, scientist Satoshi Kanazawa relates his experiences when his scientific investigation ran headlong into political correctness.  It's a dismaying tale for anyone interested in advancing science, but not really surprising – scientists are, after all, as human as the rest of us.  As I read his article (which relates a story in psychology), I was thinking about climate science and how political correctness and financial rewards have distorted the field.  The impact of political correctness on science varies wildly according to the particualr field of science.  For example, political correctness has little impact on nuclear physics, mathematics, or inorganic chemistry – but a lot on anthropology, psychology, climatology.

The only defense I know against this sort of thing is to be a determined skeptic – don't believe anything without reproducible evidence to support it...
Posted by Unknown at (permalink) 5:13 AM No comments:

A Tale of Two Vasectomies...

I suspect most adult men wouldn't expect an email from their mother with a subject line like that.  In my family, it's well within the bounds of normality :-)  A great joke with an unexpected political twist:


A man goes into the hospital for a vasectomy. Before the procedure a very attractive nurse comes in and takes his vitals, then tells him to take all of his clothes off. When he is fully undressed she instructs him to lie down on the table.

The man obeys. The nurse then takes all of her clothes off and climbs on top and has her way with him.

Upon the completion of the act the man catches his breath and asks what that was all about. The nurse informs the patient that studies have shown that before a vasectomy if the man has an ejaculation, he will be more relaxed and that the vasectomy is easier for the surgeon to locate and sever, thereby making the surgery safer, more efficient and quicker.

The nurse responds, "They are getting vasectomies too, but you have Blue Cross and they have Obamacare."

I sense support for Obamacare rapidly declining amongst men...
Posted by Unknown at (permalink) 5:03 AM No comments: