This ain't yo' momma's belt sander! 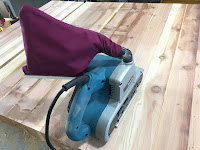 This ain't yo' momma's belt sander!  I tried out my new belt sander for the first time this morning.  Wow!  It's been nearly 30 years since I last bought one of these, and I was very surprised at how much they've improved.  A belt sander is a pretty uncomplicated tool: a motor, a drive (usually a belt), a couple of rollers, a metal plate, and that's about it.  What could they do to improve that?

There are two huge differences between this sander and the one I purchased last century.  The first one I noticed was the noise: this one is much quieter than my old one, and blessedly free of the loud metallic rattles that my old one emitted constantly.  The second thing I noticed as soon as I applied pressure on the wood: virtually no sawdust escaped it.  My old one filled the room with fine sawdust in seconds.  This one emits so little that I don't even need to wear a mask!  I have no idea how they did this, but whatever they did seems to actually work.  Very nice, that is.  Then there is one slightly subtler improvement.  My old sander, when you turned it on, would generate so much torque that it would jump uncontrollably in your hands.  Because of that, I always started it in the air, then lowered it onto the work.  This sander starts much more gently; so much so that I can safely start it while resting on the work.  This isn't really terribly important, but it's a nice thing that I appreciate.

On the right bottom side of the photo above, you can see an area I sanded with a 60 grit belt.  In under a minute I removed all objectionable edges in about 1/6 of one side of that landing piece.  Even going through three finer grits it's only going to take me an hour or so to sand the whole piece down.  Very nice!

Until this morning, I was annoyed at myself for leaving my old belt sander in California.  Now I'm actually happy I did!
Posted by Unknown at (permalink) 9:05 AM 1 comment:

That sentence defines what occupations are not eligible for overtime pay.  A recent dispute centered on the meaning of that sentence.  In everyday English usage, there are two possible interpretations of that sentence because there is no comma between "packing for shipment" and "or distribution".

A US appeals court has ruled that the sentence above is ambiguous, and therefore a labor dispute should be decided in favor of the employees rather than the employer.  More examples of such ambiguous legislation or contracts here.

Reading about this reminded me (rather too forcefully) of one of my least favorite aspects of executive life, back in the bad old days when I was still one of them.  I spent a ridiculous amount of time reading all the language in contracts, including such details as whether to use the Oxford comma or not in any particular sentence.  On a large contract (as the examples linked above illustrate), a large amount of money might ride on possible interpretations of contract language.  What really got me going on this issue was discovering language that was almost certainly intended to deceive or trick us, in draft contracts coming from large multinational corporations we were considering doing business with.  It was easy to tell if these were deliberate constructions or not: we would simply red-line the language in question and propose an unambiguous alternate.  If the other company pushed back on our change ... then we knew it was deliberate.  I consider that dishonest behavior myself, and I see no need for that in a legitimate business contract.  Given what I saw, however, I have to conclude that mine was a minority viewpoint – at least with many large corporations.  There were exceptions, thankfully.  And the small businesses I dealt with never seemed to have this issue.  I suspect it has to do with the point at which a corporation becomes large enough to have a permanent legal staff – they seemed to believe that such trickery was part of their job description...
Posted by Unknown at (permalink) 8:51 AM No comments:

Paradise ponders, where the hell did that day go edition...

Paradise ponders, where the hell did that day go edition...  Yesterday I was scrambling all day long.  I was feeling a bit off (and I am today as well), but none of the day's activities were onerous – there were just a lot of them!  I never even thought about making a post, much less actually doing it...

Miki, our oldest field spaniel, went to the groomers for a haircut yesterday.  He came out looking sleek and fit, and acting very happy.  I'm thinking we let him get a bit too shaggy.  When I walked into the groomer's 45 minutes early, I expected a little confusion when I checked in.  Nope.  The groomer recognized Miki immediately, greeted him in a happy way, and it was clear Miki recognized her as a friend right away.  A little later, still talking with the groomer, she asked about Cabo and Mako – obviously remembering them from their one haircut about six months ago.  She especially asked about Cabo, wondering if she still had “those eyes”.  :)  When I assured her that Cabo still had that same face, the groomer was delighted – and then showed me the photo of Cabo that she kept on her phone.  Wow!  Then she went on to say that her experience with our four field spaniels (she's given Mo'i a cut as well) convinced her that her next dog needed to be a field spaniel.  Our dogs apparently made quite the impression!

For the past couple of days we've had roofers working on our small outbuilding.  This is the oldest structure on our property, built in 1990 by the owners who built the house we now live in.  They used that outbuilding (which has power, heat, and a bathroom) and an RV as their domicile for the two years it took to get the house built.  I don't think it's received any TLC since it was built.  The roof was fiberglass and asphalt shingle, the gutters aluminum.  The shingles were wearing out, the underlayment was all dried and cracked, and the gutters falling off.  That old roof has been removed, as have the gutters.  New underlayment is down, and the entire roof has been sheathed in standing seam steel, matching our house.  On Monday they will be back to install fascia and soffit (all aluminum), and later next week they'll put the new gutters up there.  They'll also be replacing the gutters on our house, which are also in bad shape plus the construction we did last year involved several roof-line changes that also require redesigned gutters.

Yesterday and today we have “Blue Stakes” people here to mark the locations of the various underground utilities (gas, electric, cable TV, and phone).  This is in preparation for another round of digging in our yard, scheduled to start next week.  This time, the digging will be in all our yard covered with lawn – about three acres in total, in four discrete pieces.  This round of digging is to get sprinklers installed.  This is a system I've been working on getting installed for nearly two years now; it's proved far harder to find a craftsman to do the work than I ever thought it would!  I finally did find one, though, and this same fellow is going to sod about an acre of our lawn, and overseed the rest.  He's also going to fix all the various grade problems caused by our paving our driveway three years ago, and from the construction last year.  All this right in the middle of mud season!  There's going to be quite the mess around here for a while...

I went to Angie's for breakfast yesterday with Bruce N., a local friend whom I hadn't seen for a while.  He's got lots of interesting things going on in his life, including plans to build an extension onto his home in Avon, and a large steel barn close by on the same property.  These projects are both derived from the fact that one of his sons has moved in with him, complete with wife and four grandkids (with another on the way!).  That leaves very little room for Bruce and his wife June, so they're building an extension for themselves.  The barn is something he's wanted all along; a place to park tractor, mowers, truck, etc., and to have a baby goat pen alongside for his grandkids.  He got surprised when they started looking for a contractor to excavate the foundations for these projects – everyone is so busy now that the times being quoted would completely mess up their plans.  So Bruce and his son decided to buy a medium-sized Komatsu excavator (similar to the one above), use it this year to complete a long list of earth-moving projects, then sell it.  That's way cheaper than putting 3 or 4 hundred hours on a rental, and they'll be able to tackle some other projects they'd like to do (drainage ditches, terracing, etc.).  They took delivery of it just yesterday, and now Bruce has to learn how to operate it.  Sounds like fun to me! 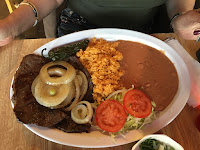 Debbie and I grabbed lunch at Los Primos yesterday.  She was really, really hungry and put away that entire carne asada plate at right.  I had a couple of gorditas.  As usual, all of this stuff was delicious.  Also as usual, the staff were super friendly and smiles were everywhere.  We love this place...

Also yesterday our persevering oven repairman  (Jim) came for his next attempt at repairing our two broken ovens.  This time, he succeeded with one!  Yay!  He had the right part, it was identical to the one he was replacing, and it all worked on the first try when he buttoned up the oven.  The oven he fixed had an intermittent temperature control problem, and in that oven all of the temperature control is contained in a single thermostat assembly, which is what he replaced.  So that oven should now work correctly.  The other oven was the one he worked on during his last marathon visit a couple of weeks ago.  That oven exhibited the same wildly high temperatures with 100°F swings even after he'd replaced the thermostat assembly.  This time he was on the phone with the manufacturer's technician (Viking is the manufacturer) trying to troubleshoot it.  After an hour or so on the phone, they concluded that a control board (electronics) was at fault.  The old thermostat probably was just fine.  So we've ordered that part (about $200), and now we're expecting Jim for the fourth visit in a couple of weeks.  The labor charge for the repair is fixed, and if you calculate the per-hour charge it's going to work out to about $5/hour.  Darrell's is taking a bath on this one.  Little do they know that a cloud of weirdness follows us everywhere.  Probably our address and phone number will be tacked to their wall after this, with instructions to hang up should we ever call again. :)
Posted by Unknown at (permalink) 7:34 AM No comments: