Just one more thing on my long, long list of things that are wrong with American education: grade inflation.

What is grade inflation?  Just look at the red line (percentage of students receiving an “A” grade) on the graph at right.  That's grade inflation.  Today nearly half of all grades given in colleges are an “A”.

This doesn't help the student at all.  People evaluating students on the basis of their grades will know, like I do, about grade inflation.  The same kind of grade inflation is occurring with GPA scores, too.  Grade inflation makes grades (whether letter grades or GPAs) useless as a way to assess a graduate's achievement.  This is precisely the same effect that affirmative action have.

So who is helped by grade inflation?  Short answer: the institutions of higher education.

Here are three articles (one, two, three) discussing both the facts and the impacts of grade inflation.

Every time something makes me think about American higher education, I'm overcome with a feeling of impending doom.  Damn.  I need a drink...
Posted by Unknown at (permalink) 6:14 PM No comments:

At right is a photo of downtown Tokyo, Japan, at night.  But there's something odd about the river running across the photo – what's that glowing blue stuff?

I'm going to make you go read the article to find out.  But I'll tell you this: it's really, really cool...
Posted by Unknown at (permalink) 6:04 PM No comments:

What Does This Mean? 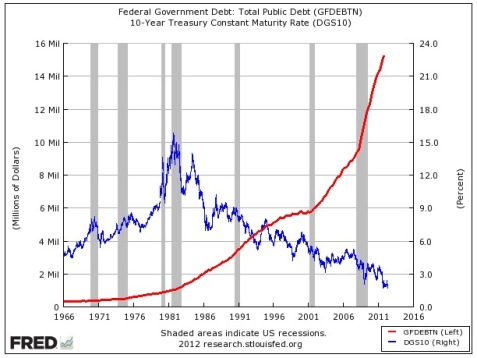 I've been watching the T-bond rate for months now, as it decends to impossibly low interest rates.  From highs of over 15% APR in the early '80s, it has dropped to just over 1.5% APR as of Friday.

This is an absolutely incredibly low interest rate.  These interest rates are set by auction; by definition this means that there are plenty of borrowers (the buyers of the bonds) willing to lend the U.S. billions of dollars at these absurdly low rates.  If 1.5% doesn't really mean that much to me, here's another way to look at it: would you lend the U.S. government $1,000 for ten years, in exchange for $15 a year?  That's exactly what thousands of willing lenders, lending an aggregate of many tens of billions of dollars, are doing.

What on earth is wrong with these people?  Why would they do such a thing?  It especially seems to fly in the face of reason when you see the size (and rate of increase) of the U.S. debt, nicely shown on the graph at right.  In this sort of situation, one might reasonably expect to see inflation – which would make you very reluctant indeed to lend money at such low rates.

I've read dozens of articles claiming to explain this phenomenon.  They all boil down to some combination of two things:

– U.S. Treasury Bonds are the least bad place to park your money right now (in other words, the most likely place to give you your money back).  Because of that, it's a seller's market – lenders trip over each other competing for the chance to buy T-bonds.  The problem I have with this explanation is that 1.5% APR is hardly any better than stuffing money in my mattress.  I don't find this argument particularly persuasive.

– the smart lenders are persuaded there is almost no risk of inflation in the U.S., because of the success of the Fed in managing it.  This is so implausible that I simply cannot believe even the stupid money would believe it, much less the smart money.

So I am left completely puzzled by this phenomenon.  Any of my readers have any ideas?
Posted by Unknown at (permalink) 6:00 PM No comments:

I stole the title from Doug S., who sent this to me and ruined my whole day...

Posted by Unknown at (permalink) 5:45 PM No comments:

Dave Carter is a regular poster on Ricochet.  He's also a long-haul truck driver, which gives him quite an unusual perch from which to observe the world.  I always enjoy his posts, so when I see his byline I drop everything to read it.

This time his post is a long story about the great care he got recently in Maryland for a kidney stone.  These are apparently extremely painful.  I've known several people with a tendency to have kidney stones, and the pain of them is the main thing any of them talk about.  Here Dave describes getting the pain medication, but the close of this paragraph had me rolling on the floor laughing.


... In moments it seemed the world slowed down as the pain began to subside, taking with it my capacity to speak coherently, focus on anything, or process any information in a rational way.  I was in a numbed stupor.  I felt like a Congressman.

Dave, you're my kind of man!  Read the whole thing; you won't be sorry...
Posted by Unknown at (permalink) 5:42 PM No comments: