Toshiba is showing a new large-format 3D television receiver that doesn't require viewers to wear any special glasses.  The technology involved is quite understandable (though complex) – it actually transmits different images to viewers' left and right eyes to create the stereoscopic visual effects.  To do this, the TV has to know where the viewers are located – and it does this by using a camera to watch all the faces watching it.  Awesome!

Personally I'm more interested in such a display as a computer screen than I am as a television.  I can think of all sorts of uses for 3D displays for computer users...
Posted by Unknown at (permalink) 6:38 AM No comments: 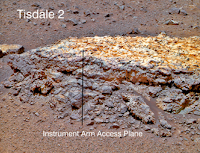 The Mars rover Opportunity is already hard at work in the Endeavour Crater, which it only recently reached after years of travel.  It's already finding things never before seen on Mars, like the rock at right:

Go, Opportunity, go!
Posted by Unknown at (permalink) 6:33 AM No comments:

I love this Cassini photo.  I'll spare y'all my rant about robotic explorers vs. manned space flight.  Just enjoy this!

Via APOD, of course.  And click to enlarge.
Posted by Unknown at (permalink) 6:29 AM No comments:

For the compression geeks.  Amusing, more than anything...
Posted by Unknown at (permalink) 6:27 AM No comments:

And Maureen Dowd is talking trash on Obama...
Posted by Unknown at (permalink) 6:26 AM No comments:

The folks at Google have come up with another clever toy.  This one lets  you draw an arbitrary distribution curve (over time), then finds Google queries whose frequency closely matches the curve you draw.  I tried drawing about ten quite arbitrary (and in some cases, challenging!) curves – and every time this tool found a query whose results quite closely matched it.  Impressive...
Posted by Unknown at (permalink) 6:24 AM No comments: 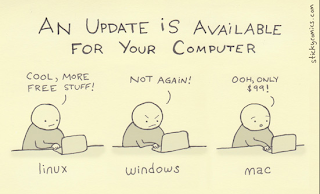 Via my colleague Aleck L.  This cartoon very nicely illustrates the general mindset of the three major operating systems' users.

In the case of Linux, most laptop/desktop users are hard-core “hackers”, familiar with things like UNIX commands and vi.  They tend to think of Linux as a vehicle for using all kinds of free open source software goodies.

Windows users, on the other hand, are sick and tired of the endless updates required just to keep their systems from being hopelessly compromised by Chinese or North Korean hackers.  The vast majority of these updates bring nothing new with them, so there's no reward (unless you count not being hacked) for the time and effort (and not insubstantial risk) in installing them.

Mac users get relatively few updates, and when they do get them, they generally come with all kinds of new and interesting functionality.  They're generally quite happy to fork over some coin to get the new stuff (Mac upgrade rates are astonishingly high).

The cartoon says all of that in a couple square inches...
Posted by Unknown at (permalink) 6:21 AM 1 comment:

Here's a compilation of OBlunders, most of them things I'm sure you've seen before.  The point of this is to demonstrate the remarkable degree to which the lamestream media is carrying water for Obama.  Remember how the lamestreamers jumped all over every last verbal misstep of George W. Bush, Dan Quayle, and Ronald Reagan?  Not much evidence of that here – even though the current President has arguably produced more (and better!) targets for media mocking than any of his predecessors... 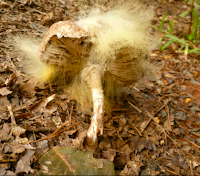 My sister lives in central Virginia.  Recently she spotted this bizarre-looking hairy mushroom in her yard.  Any idea what the heck it is?

If you have a clue, please leave a comment or send me an email...
Posted by Unknown at (permalink) 6:01 AM 1 comment:


My Last Trip to COSTCO:

Yesterday I was at my local COSTCO buying a large bag of Purina dog chow for my loyal pet, Jake, the Wonder Dog and was in the check-out line when a woman behind me asked if I had a dog.

What did she think I had an elephant? So sinceI'm retired and have little to do, on impulse I told her that no, I didn't have a dog, I was starting the Purina Diet again. I added that I probably shouldn't, because I ended up in the hospital last time, but that I'd lost 50 pounds before I awakened in an intensive care ward with tubes coming out of most of my orifices and IVs in both arms.

I told her that it was essentially a Perfect Diet and that the way that it works is, to load your pants pockets with Purina Nuggets and simply eat one or two every time you feel hungry. The food is nutritionally complete so it works well and I was going to try it again. (I have to mention here that practically everyone in line was now enthralled with my story.)

Horrified, she asked if I ended up in intensive care, because the dog food poisoned me. I told her no, I stepped off a curb to sniff a poodle's ass and a car hit me.

I thought the guy behind her was going to have a heart attack he was laughing so hard.

Better watch what you ask retired people. They have all the time in the World to think of crazy things to say.  Send a link to this (especially) to all your
retired friends ... it will be their laugh for the day!!!

Posted by Unknown at (permalink) 5:56 AM No comments: