Ajanta Caves...  My mom sent me some photos of this place, located slightly west of the geographic center of India.  I had never heard of the Ajanta Caves before, and I spent an hour or so just “exploring” them online, getting more and more amazed as I went.  The Wikipedia article is a good place to start, and here is a Google map to it...
Posted by Unknown at (permalink) 7:05 AM 1 comment:

We live in ridiculously convenient times...

We live in ridiculously convenient times...  That's the first sentence of a Wall Street Journal piece by Dave Barry (actually an excerpt from his latest book).  Go read, but please put down your hot morning beverage first...
Posted by Unknown at (permalink) 6:54 AM No comments:

Pater: We were manly men before we were ten...

Pater: We were manly men before we were ten...  Another post from my brother Scott, with a story about our dad:


We were manly men before we were ten.

At the tender age of six our father strapped a huge army issue back-pack jammed  full of heavy camping gear onto my short little self. It felt like it weighed a ton. Was wondering if maybe my brother had a lot less weight in his backpack although it looked sort of about the same bulky size. We had a long way to walk before we could park this tortuous load which seemed like cruel and unusual punishment. At the same time though it made me feel more grown up.

Our destination for the day was Chimney Pond. The backpack frame would scrape on the ground every once in a while and I found myself leaning forward more than usual to prevent this from ruining the thing.  Seemed like we almost had to run with all that weight (50-60 pounds?) to keep up with Dad's long strides. Every once in a while Dad let us stop to drink some water and have a small snack – like a few handfuls of gorp or maybe some pemmican.  What a relief it was to take off the backpack for a few minutes. For a teasing brief moment in time it felt like I weighed as much as a feather.

My way of thinking was to sneak as much weight in water and food as possible into my gut so that the backpack would weigh less. Dad taught us some survival skills along the way and spoke to us about the critters that lived around there. He also joked around some.  It seemed like it took forever to get to where we were going but it probably wasn't that many miles. No kid on earth knows what a perfect night of sleep feels like unless they have endured that much slavery and then experience breathing that cool clean mountain air while in la la land tucked in a warm sleeping bag.

Early next morning we were back on a trail heading for the top of Mt. Katahdin. There was a slight difference. The backpacks weighed much less than the day before.  After scrambling over humungous boulders and hiking quickly up steep slopes we did make it to the top. A brass marker on a cairn let us all know that we were a mile high. Off to the south (?) maybe about 100 feet away from the cairn was a cliff that Dad wanted us to sit on top of.  We did as we were told. Problem was our backpacks were now just about empty and they felt like sails on our backs with a 60 m.p.h. wind blowing hard at us. Thought for sure I was going to sail right off the top of that cliff. He instructed us to pick up rocks, throw them over the side and listen carefully for the sound of these rocks hitting bottom.  “Shout when you hear them hit.  I'm going to time you so I can calculate how far down it is to the bottom of that cliff.”  We all decided that this was one heck of a tall cliff because it took a while before we heard those rocks hit anything.

The next cliff experience was phenomenal. The knife edge. A scary long cliff on each side of you as you ran leaping over gaps in this narrow pathway. At times it was not all that narrow, but when it was narrow it gave you thrills and chills – that's for sure.

After another heavenly night of sleep there was a treat in store for us who knew not what was next. A cool and refreshing swim for 5 minutes and not a second less. Actually this was cooler than your average cool refreshing swim.  35 degrees Fahrenheit I believe was the recorded temperature. We had no choice in the matter.  We were not allowed to leave the water until the 5 minutes were up. We asked several times if the 5 minutes were up and of course they weren't. That was the longest 5 minutes I'll ever experience.  When back at camp ( Long Pond, Lincoln Center, Maine ) my lips were bright blue and purple and I was still shivering from that swim. Caught a pneumonia or something about as bad and Mother Dear was pretty pissed off at Dad for almost killing me which was carrying it a little too far. 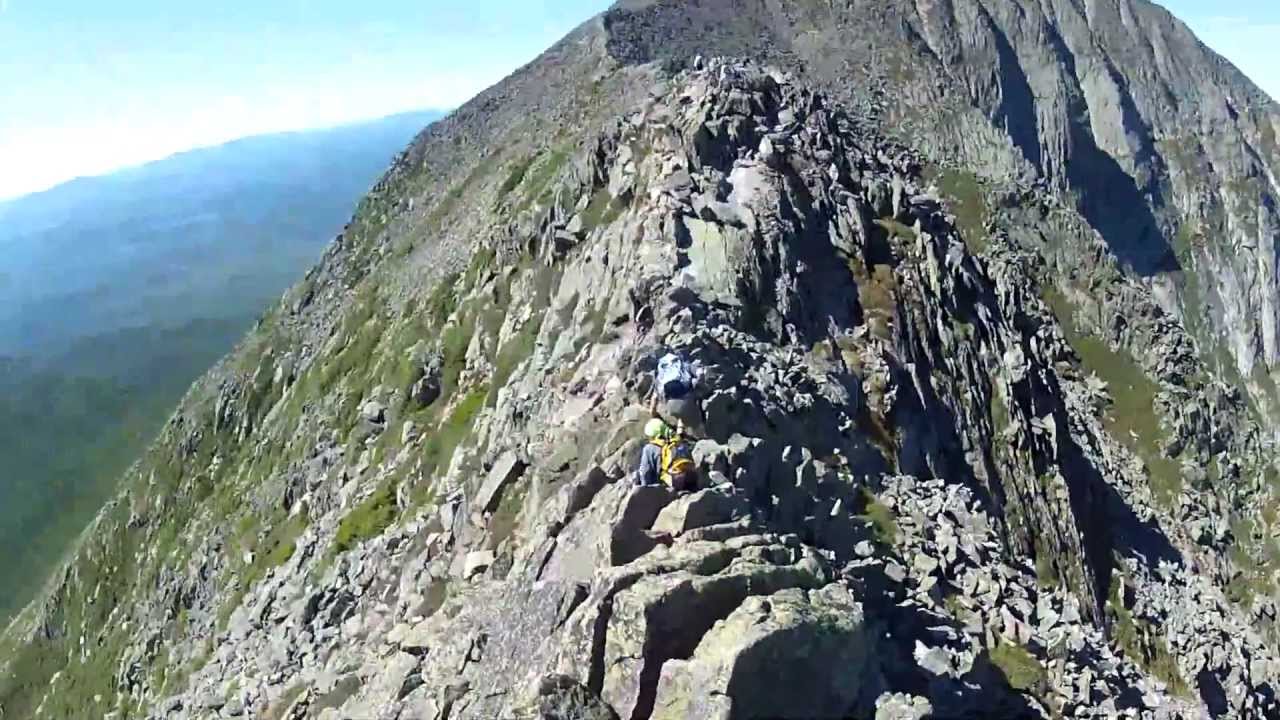 My own memories of that trip mostly agree with Scott's.  Those heavy backpacks on the way up to Chimney Pond – oh, those I definitely remember.  I didn't think I'd survive that hike :)  The relief on arriving at our Adirondack shelter was utterly overwhelming.  The swim in Chimney Pond is also an indelible memory, though I'm pretty sure the temperature was actually below freezing, due to dissolved minerals or salts – and there was ice along the edges.  I also remember sitting on the cliffs with our light packs, and throwing rocks over the side.  But most of all I remember the hike along the “Knife Edge” between Baxter Peak and Pamola Peak.  The photo at right (not mine) gives you a feeling for it.  That photo was taken looking south, toward Baxter peak.  That narrow rocky ridge is present for a good part of the length of the trail, and in places there are iron handholds pounded into the rock so that you can safely traverse especially narrow places.  I was thrilled by the feeling of height you get with a near-cliff on both sides of the narrow trail, and that knife edge in front of you as far as you could see.  Before I joined the Navy, I took one last hike on Katahdin, by myself, and I hiked the knife edge three times in a week – my favorite part of that entire gorgeous mountain...
Posted by Unknown at (permalink) 6:50 AM No comments: