The Last Bomb is a Technicolor documentary from the War Department and the Army Air Forces Combat Camera Units, filmed in the last days of the war with Japan.  It's online in its entirety...
Posted by Unknown at (permalink) 4:24 AM No comments:

Your fearless blogger has tears streaming down his face right now.  Not because of anything I've read this morning.  No, these tears are caused by one of my dogs.  I blog from a tiny little space, about 8' by 10'.  Two of my dogs are often sleeping behind me.  One of them just farted, hence the tears...
Posted by Unknown at (permalink) 4:21 AM No comments: 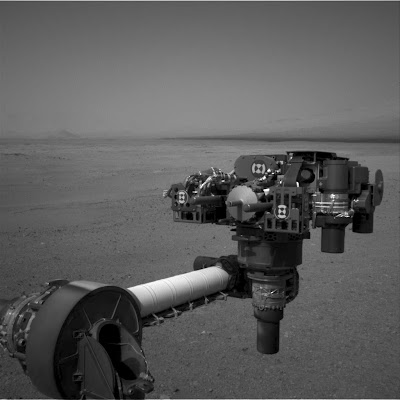 Yesterday Curiosity stretched its articulated arm for the first time since before it was launched toward Mars.  There are five separate joints on the arm, and all of them were “exercised”.  Curiosity's numerous cameras watched every motion to verify that it worked correctly – and it did!

Curiosity's first days remind me a little bit of a butterfly emerging from its chrysalis – various parts are being pulled out, stretched, tried out, checked out, and calibrated.

And they're all working perfectly so far!
Posted by Unknown at (permalink) 4:18 AM No comments:

Believe You Can Change...

When I read that title, my reaction was “Well, of course you can change!”  I dug into the article to find out what point the author was trying to make, and got to this passage – which I found a bit shocking:


The difference, Dweck discovered, was one of mindset. Dweck had always thought “human qualities were carved in stone. You were smart or you weren’t, and failure meant you weren’t.” That was why the helpless kids couldn’t take it when they started failing. It just reminded them they sucked (they easily got confused, they had “a bad rememory”). Of course it wasn’t fun anymore — why would it be fun to get constantly reminded you’re a failure? No wonder they tried to change the subject. Dweck called this the “fixed mindset” — the belief that your abilities are fixed and that the world is just a series of tests that show you how good you are.

The successful kids believed precisely the opposite: that everything came through effort and that the world was full of interesting challenges that could help you learn and grow. (Dweck called this the “growth mindset.”) That’s why they were so thrilled by the harder puzzles — the easier ones weren’t any sort of challenge, there was nothing you could learn from them. But the really tough ones? Those were fascinating — a new skill to develop, a new problem to conquer. In later experiments, kids even asked to take puzzles home so they could work on them some more.

It took a seventh-grader to explain it to her: “I think intelligence is something you have to work for…it isn’t just given to you… Most kids, if they’re not sure of an answer, will not raise their hand… But what I usually do is raise my hand, because if I’m wrong, then my mistake will be corrected. Or I will raise my hand and say… ‘I don’t get this. Can you help me?’ Just by doing that I’m increasing my intelligence.”5

In the fixed mindset, success comes from proving how great you are. Effort is a bad thing — if you have to try hard and ask questions, you obviously can’t be very good. When you find something you can do well, you want to do it over and over, to show how good you are at it.

In the growth mindset, success comes from growing. Effort is what it’s all about — it’s what makes you grow. When you get good at something, you put it aside and look for something harder so that you can keep growing.

Fixed-mindset people feel smart when they don’t make mistakes, growth-mindset people feel smart when they struggle with something for a long time and then finally figure it out. Fixies try to blame the world when things go bad, growthers look to see what they can change about themselves. Fixies are afraid to try hard — because if they fail, it means they’re a failure. Growthers are afraid of not trying.

Well, I'm a “growther” (and didn't even know it). I have to say that it never occurred to me that there might be this “fixed mindset”.  The last two paragraphs above resonated very strongly with me; it's a good description of how I approach my craft. The preceding paragraph sounded alien to me ... and yet I recognized it as a pattern I see often in people I've worked with.  I just never realized there was another way people felt about such situations...
Posted by Unknown at (permalink) 4:12 AM No comments:

Fascinating article about one way tech companies die.  Any author who can weave “bozo” and “event horizon” together in a convincing way has my approval :-)
Posted by Unknown at (permalink) 4:00 AM No comments:

Is There Nothing That Amazon Can't Do?

Amazon Glacier: archival storage at about a penny per gigabyte per month, with a stated 11 9s durability/year.  Awesome.  I gotta get me some of that!
Posted by Unknown at (permalink) 3:58 AM No comments: