Lindzen on climate alarmism...  If you're not familiar with him, Richard Lindzen is a well-known atmospheric scientist at MIT who's long been cautious about global warming (or climate change) claims.  I just ran across a detailed article he wrote a few days ago.  Here's one sample paragraph:

Globally averaged sea level appears to have been rising at the rate of about 6 inches a century for thousands of years. Until the advent of satellites, sea level was essentially measured with tide gauges which measure the sea level relative to the land level. Unfortunately, the land level is also changing, and as Emery and Aubrey note, tectonics are the major source of change at many locations. Beginning in 1979 we began to use satellites to measure actual sea level. The results were surprisingly close to the previous tide gauge estimates, but slightly higher, but one sees from Wunsch et al (DOI: 10.1175/2007JCLI1840.1) that one is in no position to argue that small differences from changing methodologies represents acceleration. Regardless, the changes are small compared to the claims that suggest disastrous changes. However, even in the early 1980’s advocates of warming alarm like S. Schneider argued that sea level would be an easily appreciated scare tactic. The fact that people like Al Gore and Susan Solomon (former head of the IPCC’s Scientific Assessment) have invested heavily in ocean front property supports the notion that the issue is propagandistic rather than scientific.

The whole thing is an excellent and sober summary of the problems with climate alarmism.  No matter what your position or beliefs on climate change are, you'll learn something by reading this piece...
Posted by Unknown at (permalink) 11:51 AM 4 comments:

Paradise ponders, joinery jig jollies and vampire doctors edition...  The past couple of days I've been assembling and learning to use two joinery jigs that I purchased.  I'm still working on them; they're fairly complicated, both to put together and to use.  One of the jigs is for dovetail and finger joints, the other for mortise and tenon joints. The photo on the left is my new dovetail and finger joint jig, before I assembled it.  On the right is the mortise-and-tenon jig, mostly assembled.  Both of these came with large bags of parts, some of which had to be assembled, and some of which are needed for certain modes of use.  Both also came with thick manuals, well-written and illustrated, showing you how to do all sorts of different things using the jigs.  It will be a while before I feel competent with these. :)  Fortunately, basic sorts of joints look pretty easy to do. 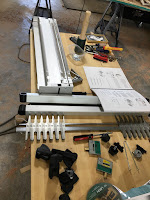 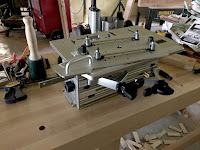 Building these jigs involves a little woodworking, which I wasn't expecting at all.  The most involved thing I have to do is to build a sturdy wooden box that can lift the jigs a couple of feet above the 35" high surface of my bench.  That will let me put joints in boards that are up to 5' long, which I actually need for the very first set of dovetail joints I'm making.

Yesterday Debbie and I had a joint doctor's appointment with our general practitioner.  I had a few things to talk with her about, including my desire to check on my blood B12 levels after adjusting the dose of injected B12 this year.  So the vampire lady there came after me with four vials of blood to fill.  First she stabbed me in the inside right elbow, and got three and a half vials when that vein gave out.  So then she stabbed me in the left inside elbow and got the remaining vial.  Truthfully I barely felt the needle; she was very good.  But I walked out looking like I'd been in a battle, with black wrap over big wads of cotton on both elbows.  Got a big bruise on the right one, too.
Posted by Unknown at (permalink) 9:39 AM No comments: