Yellow-bellied marmot pup...  Yesterday afternoon Debbie and I took a drive up Blacksmith Fork Canyon, toward Ant Flats, for our usual wildlife spotting.  We saw very little on most of the trip, except for the splashing of something large in the creek.  The splashing reminded me of otters playing, though we didn't ever sight the actual cause of the splashing. 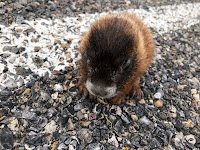 But just as we were about to exit the canyon on the way into Hyrum, Debbie spotted the little guy at right on the road.  I'm pretty sure he's a yellow-bellied marmot (aka “rock chuck”), even though they're not normally found this low (we were at about 5,500' altitude, and they're normally above 6,500').  I drove right past it without ever seeing it, even though he was in the middle of the other (uphill) lane.  Yikes!  I backed up next to him, got my four-way flashers on, and jumped out to scoot him off the road.  Shortly after I got out, another car approached, headed uphill, but fortunately saw me and the flashers and proceeded with caution – and smiles when they saw what I was doing.

We had a bit of work getting him off the road, as he was feisty and uninterested in being told what to do.  His front teeth are already about 3/4" long, and sharp as scalpels (which they resemble!).  I didn't dare try to pick him up, as every time I got near him he made angry noises and attacked.  When I tried to scoot him sideways with my (nice, thick, strong) boots, he immediately attacked my boot – and sunk his front teeth so far into my sole that he had trouble removing them!  Finally Debbie came up with the lid of a cardboard box, and I managed to get him into that so that I could take him off to a safer place.  As soon as I lifted him in the box lid, he started making very loud alarm whistles, clearly distressed. 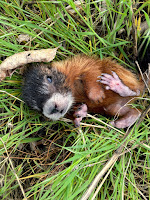 Finally we got him onto a steep slope that led down to the creek, near where I could see what looked like a marmot burrow under a big rock.  In the photo at left, he's on his back because I approached him with my iPhone, and he's preparing to attack me.  This little fellow couldn't have weighed more than 8 ounces or so, yet he was fully prepared to take me on.  If the adults are just as feisty, I don't think I'd care to approach them even if I was wearing armor!

As we left him alone, hoping he would calm down, I could see him right himself and very slowly amble downhill – and away from the road.  Here's hoping he stays off the road!  More photos from the intertubes...
Posted by Unknown at (permalink) 12:04 PM No comments:

I finally have a good place... 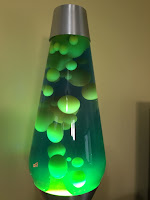 I finally have a good place ... for my lava lamp!
Posted by Unknown at (permalink) 7:27 AM No comments:

Dilbert nails it again...  I ran into this so many times in the bad old days when I was managing.  It was common enough even in the '90s to be irritating; I'm told by managers that I know that now it is so common that it almost feels like the norm.

After living here for a couple years, I feel pretty safe in saying that this would not be the experience of managers in northern Utah.  That may well be a big part of the reason why we have so many companies moving here: an educated, hard-working population.

A most unexpected find...

A most unexpected find...  Longtime readers with unusual patience will know that I have a substantial collection of slide rules and other antique mechanical computing instruments.  Once, years ago, I wrote of my regret for not having kept the slide rules I purchased new, when they were still in use (that's BC – Before Calculators).  The first one I bought in high school; the last one while in the U.S. Navy in about 1972 or 1973 – right at the end of the slide rule era.

For years my dad would occasionally send me a box of stuff – very random stuff, including photos, letters, notes, and mementos of various kinds.  The first of these boxes arrived in the early '90s, then intermittently over the next 15 years or so.  Usually my dad would call me to talk about the potential contents of the boxes; he wanted to be sure I'd be interested in them.  Nearly all of these boxes, along with their contents, I taped back up and stored after receiving them – simply because in previous homes we had no room to display the items.

Well, that's a tad different now that we have a house that seems big enough to house the entire state of Utah, with room left over for some Idahoans.  Also different, much more recently: I now have a 600 sq. ft. office, with lots of room.  As I was moving into my new office, I had occasion for the first time in many years to open and look into those boxes my dad had sent me over the years.  In one of those boxes, which dates back to the mid-90s, I found the four slide rules I had purchased as a youth.  I know for sure that they're mine, because the cases have my name, phone numbers, etc.  My dad must have had them squirreled away somewhere, together with a few other youthful possessions of mine, and sent them in that box.  I had opened that box, probably when I received it, then taped it up and left it unopened ever since.

How could I not know I had those slide rules?

Most likely it was because I didn't start collecting slide rules until about 2002 – which would have been about 8 years after my dad sent that box.  Those slide rules, in the '90s, apparently did not make a big impression on me.  I have no memory of having received them.  I was totally shocked when I opened that box and saw them a few days ago!

All of those slide rules were common, ordinary types; none of them have any particular value.  They're all in great shape, even though I used them every day for years – I took good care of them.  They aren't valuable, but they were mine, and that counts for something in my book :)
Posted by Unknown at (permalink) 7:06 AM No comments: