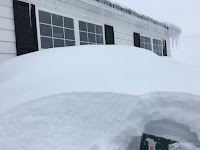 Paradise ponders, snow and ice trauma edition...  We had quite the day yesterday.  I mentioned in a previous post that I intended to shovel the snow off the new deck roof where it had accumulated some of our second floor windows.  At right you can see those windows, prior to my shoveling.  The snow piled there was up to 4' high, a combination of snow that fell there, and snow that slid off the second floor roof above.  Also it wasn't just snow: melt water dripped off those icicles you see, and then froze in the snow below.  It took me almost 5 hours to shovel off a 3' wide strip from in front of those windows, and I have lots of sore and strained muscles to show for it.  Much worse, though: while I was shoveling, a vast swath of snow and ice fell off the second floor roof right on top of me.  I was knocked down and knocked out cold.  I woke up with my face in a snow pile and a 3" thick block of ice on top of me, about 4' by 2'.  Yikes!  I have no idea how long I was out, but I suspect it was only a few seconds as my clothes didn't get wet.  Then I had to shovel the new fall off before I could get back to work on the original problem!

As if that wasn't punishment enough, we got some more this morning.  When we woke it was raining and the temperature was already above freezing.  We'd heard some snow fall during the night, big booms and crashes.  So the first thing we did this morning was to walk around the house looking for any problems – and we had a big one.  Water was steadily dripping into our dining room, and we had visible drywall damage over a 50 square foot or so area.  We also had furniture and a rug getting wet.  It was a mad scramble for a while – first to clear out all the stuff under the leak and start catching and sopping water, second for me to get upstairs to the source of the leak.  I knew what it was: there was a snow and ice dam on our balcony, and it was backing up the rain and melt water.  I had hoped to get to that yesterday, but I was exhausted from the deck roof adventure.  Now we were suffering the consequences of my inadequacy.  I had a couple hours of hard work, shoveling wet snow off the balcony and then chipping ice away with a hammer.  In places it was 4" thick, though most of it was “only” around one inch.  Now my right wrist is sore from all the hammering I did, and in a hurry, too.  We simply can't let snow accumulate there!  In the course of chipping that ice away, I did some damage to the balcony floor, too – that's not going to be cheap to fix.  Come spring I'm going to see if there's anything at all we can do to permanently fix that problem... 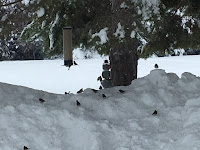 Yesterday after I shoveled the deck roof off, I refilled our bird feeders (and they're empty again, so I'll be doing that again when I finish this post).  Moments after I filled a feeder (we have six), the birds would swarm it.  Most of the birds were goldfinches, juncos, and chickadees, but I also saw a spotted towhee – an unexpected winter feeder here.  The photo at right shows two of our feeders.  The one on the left I keep filled with already-hulled seed.  It has something tricky to keep the magpies off it: spring-loaded perches.  The little birds don't move them at all, but anything bigger than about a robin will cause the perch (which is smooth metal) to swing down, and they lose their grip.  When I first put up that feeder it was very entertaining watching the magpies get all frustrated at their inability to get at that yummy food!

Our Model X is about to get all official!  On Friday I received the packet of paperwork needed to get it registered here, so today Debbie and I drove it into town, to the Cache County office building where the DMV offices are located.  Once again it was a pleasant experience: we walked in and were immediately served by a friendly and helpful clerk.  No lines, no 'tude – it was great!  Well, except for the part about writing a check for the sales tax. :)  Anyway, we got the paperwork all done in about ten minutes, with lots of smiles.  It will surprise no one who knows me that I ordered personalized plates: "8SIGMAS".  On the form I filled out for that, I had to explain what that meant, so I wrote: “Eight standard deviations from normal”.  The clerk who helped us read it and cracked a small smile, but didn't say a word.

Speaking of the Model X, I've noticed an interesting phenomenon with it.  When I'm backing it into our garage (it fits!), Debbie closes her eyes and refuses to watch.  This has something to do, I think, with the fact that there's about 4" of clearance on either side.  This bothers her for some reason. :)

While we were in town we stopped for lunch at one of our favorite spots: Jack's Wood Fired Oven.  We had pizzas... 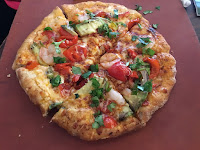 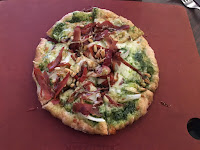