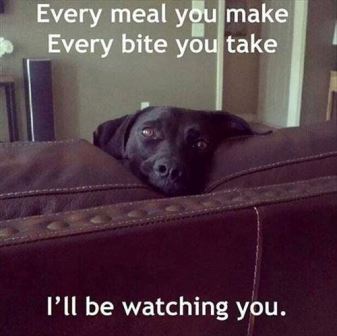 Posted by Unknown at (permalink) 3:59 PM No comments:

Paradise ponders...  So this morning I took a couple of dog photos (below).  That's Miki the field spaniel on the left, and Race the smooth-coat border collie on the right.  They were so happy to see us this morning!  Running around the kitchen following us as we make our coffee and tea is exciting for them.  Also, they're anticipating our morning ritual of using pieces of a banana as a training treat (they love bananas!).  I make them spin, sit, lie down, and stay ... and pay them with chunks of banana. 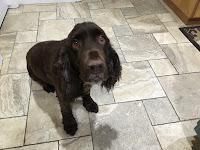 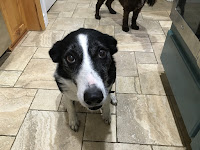 After Abby S. left this morning, I spent a few hours installing some more acoustic panels in my new office.  The series below shows what's involved.  In the first photo, you see the aluminum Z-clips I installed on the back of a corner panel.  Those Z-clips are a clever mounting device – they're quite strong for the vertical component of the load (roughly 100 pounds per Z-clip), and plenty strong enough (roughly 15 pounds per Z-clip) for the horizontal component of the load.  The eight Z-clip pairs I used on these corner panels are gross overkill for a 40 lb. panel – those things aren't going anywhere :)

The next photo shows how I laid out and mounted the mating Z-clip halves on the wall.  While it's important to get these reasonably close to the right place, the Z-clip design is reasonably forgiving for positioning errors – you can be off by about a half inch in any direction and it will still work just fine.  It's harder than you might think, at least for the corner panels, as they aren't built precisely square.

The third photo just shows half a Z-clip pair, mounted on the wall.  The mating Z-clip on the acoustic panel is pointing down and engages the up-pointing one on the wall.  To hang the panel, I just lifted it up higher than where it belongs, and let it fall into the clips.  The last photo shows the finished result for one corner. 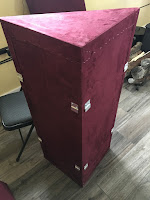 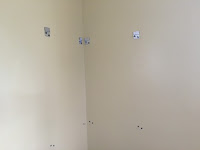 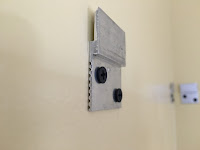 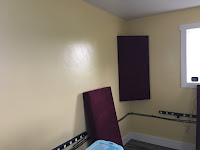 Debbie and I are going to finish off this evening by watching a movie (at home!).  Earlier we had a lupper at Angie's, which we expected to be peaceful and quiet at 2 pm.  Instead it was absolute chaos, and crowded.  Why?  Our waitress told us it was this way every year for a few days, centered around the Utah State University (nearby in Logan) graduation time.  We had no idea!  The lupper was great, though: we had their very nice vegetable beef soup and a couple of “melts” – a patty melt on rye for me, and a southwestern chicken melt on sourdough for Debbie.  Yum!
Posted by Unknown at (permalink) 3:48 PM No comments:

Paradise ponders...  I just finished up with my Saturday morning tutoring of Abby S.  We worked in my new office for the first time, instead of the kitchen table.  The look on her face was priceless when she walked through the garage and wood shop areas of my shed (which she'd never been inside of before), upstairs into the attic/storage area, and then opened the door into the high-tech looking office.  It really is a bit like walking through a cave and opening a door into a datacenter :)  It was very nice to work in front of big screens, with a real keyboard, instead of on the laptop.  Abby did wonderfully again, except for the fact that she neglected to do her homework.  Her excuse?  She got lost in a book: Fablehaven.  Good book, good excuse :)

A few days ago Debbie started working the dogs (Race and Miki) in the agility ring again.  It is so nice to see her recovery progressing to the point where she can do this!  She can't run yet, but she can do everything else – and without pain.  Wonderful...