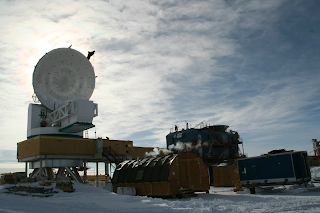 Here's something I completely missed when it went operational in 2007, and somehow I've never run into it since: an advanced radio telescope with a 10 meter diameter antenna, located right at the South Pole (at the Amundsen-Scott Pole Station).  It's called, simply, the South Pole Telescope., and it's regularly delivering quality science data.

This is an interesting piece of science kit.  The antenna is cooled to reduce background noise.  At the pole, of course, it's located in one of the quietest (in the radio noise sense) places on Earth.  One little construction detail that amused me: at the poles, an alta-azimuthal mount is basically the same thing as an equatorial mount – making the construction of the South Pole Telescope a bit simpler.

You can read more about it on the telescope's home page, or on its blog...
Posted by Unknown at (permalink) 4:56 AM No comments:

...an unelected group of people...

That phrase jumped out at me as I read Obama's remarks yesterday:


For years, what we've heard is the biggest problem on the bench was judicial activism or the lack of judicial restraint, that an unelected group of people would somehow overturn a duly constituted and passed law. And I'm pretty confident that this court will recognize that and not take that step.

That unelected group of people he's referring to is the Supreme Court.  Part of their job, under the Constitution, is to serve as final arbiter of whether the actions of the other two branches of government (the executive branch and the Congress) are “Constitutional” (that is, conforming to the Constitution).  In other words, the Supreme Court's role is to act as a counter-balance to the other two branches, to make sure they don't go too far off the tracks.

Obama, like many progressives, sees that as “meddling” and “undemocratic”.  In their view, if an elected body declares something, that should be the end of it.  Who cares if what they declare isn't allowed under the Constitution?  It's democratic, and that should override everything else.

One wonders what they think the purpose of the Supreme Court is in our government...

Reading things like this, and realizing that it reflects the world-view of a substantial number of my fellow Americans, makes me feel rather hopeless about our future.  Why?  Seriously, folks.  Take a look at our duly-elected Congress.  Tell me that you feel comfortable about the legislation they pass, so democratically.  Do you really want that collection of bozos and perverts telling you how to live your life?

I wonder what's going to happen at the ballot box in November...
Posted by Unknown at (permalink) 4:46 AM 2 comments: