Written across the wall of the cave were the symbols at right. It was considered a unique find and the writings were said to be at least 3,000 years old.

The piece of stone was removed, brought to the museum, and archaeologists from around the world came to study the ancient symbols. They held a huge meeting after months of conferences to discuss the meaning of the markings.

The President of the society pointed to first drawing and said: "This is a woman. We can see these people held women in high esteem. You can also tell they were intelligent, as the next symbol is a donkey, so they were smart enough to have animals help them till the soil. The next drawing is a shovel, which means they had tools to help them. Even further proof of their high intelligence is the fish which means that if a famine hit the earth and food didn't grow, they seek food from the sea. The last symbol appears to be the Star of David which means they were evidently Hebrews."

Then a little old Jewish man stood up in the back of the room and said, "Idiots! Hebrew is read from right to left. It says: 'Holy Mackerel, Dig The Ass On That Chick'"

Posted by Unknown at (permalink) 6:04 AM No comments:

Faster Than C, Safer Than Java, Simpler Than *sh...

Even the title of this post raises all sorts of questions and red flags!  What on earth are they talking about?  A programming language I'd never heard of before: ANI...
Posted by Unknown at (permalink) 5:46 AM No comments:

How Did Harry Reid Get Rich?

That's a damned fine question, as he's been a “public servant” nearly all his life – and the sum of all his salaries are far smaller than his net worth today.  How'd he do it?
Posted by Unknown at (permalink) 5:41 AM No comments:

Curiosity: Where It Is... 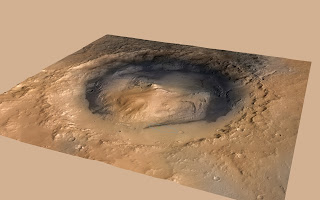 The photo at right (or here in even larger form) shows a simulated 3D view of Gale Crater on Mars, using photos taken from orbit.

To anyone familiar with the history of robotic spacecraft, this is stunningly accurate placement.  The first such spacecraft in my own memory (in the '60s) were aimed at our moon – and not infrequently, they completely missed it!  There's been steady improvement in the 50 years since then, to the point now where we're plopping a car-sized rover down on Mars just a few meters off its bull's-eye.  Awesome!
Posted by Unknown at (permalink) 5:39 AM No comments:

I kind of like this idea!
Posted by Unknown at (permalink) 5:19 AM No comments: