Do You Miss Him Yet?

George Bush had many faults, but this is a great illustration of an aspect of him that I greatly admire.  And I miss it, badly. One cannot doubt his sincerity and his caring.  One cannot imagine either in Obama.  Via my mom...

Posted by Unknown at (permalink) 6:22 AM No comments:

Those Who Do No Remember the Past... 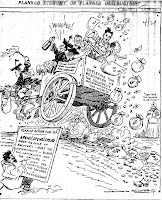 Those who do not remember the past are doomed to repeat it.  So said George Santayana once upon a time, and the man had a good point.

In 1934, when FDR was proposing enormous spending programs as the cure for the Great Depression, the Chicago Tribune ran the editorial cartoon at right (click to enlarge).  The parallels with the Obama administration (who considers FDR a hero) are obvious.

The editorial position of the Chicago Tribune today isn't quite so clear.  Obama is a hometown boy, and they've been quite supportive of him, and defensive of his failures.

I've made the comparison between Obama's initiatives and FDR's on quite a few occasions.  By far the most common reaction I get is complete ignorance of FDR's progressive agenda – cue the Santayana quote.  Those few who actually knew about FDR have had basically evenly split reactions, between those who idolize FDR and believe that his spending programs were the reason for the end of the Great Depression, and those who loathe FDR and believe that his spending programs extended the Great Depression.

So it appears that sometimes one can remember the past and still be doomed to repeat it!

Certainly not what I expected!