One in eight children born in the U.S. are the progeny of illegal immigrants...
Posted by Unknown at (permalink) 4:53 AM No comments: 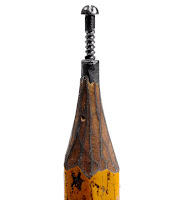 The mind boggles.  Artist Dalton Ghetti, in Connecticut, sculpts teensy tiny little things on the tips of pencils.  I'd have to have a magnifying glass to even see these things!

I can see at least one huge advantage he's got over most sculptors, though: his entire sculpture collection would fit in a shoebox, with room left over...
Posted by Unknown at (permalink) 4:52 AM No comments:

The Point of No Return...

An outstanding long article by Jeffrey Goldberg in Atlantic on the situation in the Middle East, mainly Iran vs. Israel.  There's far too much good stuff there to excerpt meaningfully, but here's a small sample:


Rahm Emanuel suggested that the administration is trying to thread a needle: providing “unshakeable” support for Israel; protecting it from the consequences of an Iranian nuclear bomb; but pushing it toward compromise with the Palestinians. Emanuel, in our meeting, disputed that Israel is incapable of moving forward on the peace process so long as Iran looms as an existential threat. And he drafted the past six Israeli prime ministers—including Netanyahu, who during his first term in the late 1990s, to his father’s chagrin, compromised with the Palestinians—to buttress his case. “Rabin, Peres, Netanyahu, Barak, Sharon, Olmert—every one of them pursued some form of a negotiated settlement, which would have been in Israel’s own strategic interest,” he said. “There have been plenty of other threats while successive Israeli governments have pursued a peace process. There is no doubt that Iran is a major threat, but they didn’t just flip the switch on [the nuclear program] a year ago.”

Emanuel had one more message to deliver: for the most practical of reasons, Israel should consider carefully whether a military strike would be worth the trouble it would unleash. “I’m not sure that given the time line, whatever the time line is, that whatever they did, they wouldn’t stop” the nuclear program, he said. “They would be postponing.”

It was then that I realized that, on some subjects, the Israelis and Americans are still talking past each other. The Americans consider a temporary postponement of Iran’s nuclear program to be of dubious value. The Israelis don’t. “When Menachem Begin bombed Osirak [in Iraq], he had been told that his actions would set back the Iraqis one year,” one cabinet minister told me. “He did it anyway.”

Posted by Unknown at (permalink) 4:19 AM No comments:

A Perseid Sort of Morning...

My start this morning was a half-hour or so later than usual, so I didn't get outside with the dogs until nearly 4 am.  By that late hour, my old friend Orion was well up in the eastern sky, and the Milky Way was tilted over toward the northwest.  I knew that tonight was the most intense night of this year's Perseid meteor shower, so I kept a sharp eye out – and was amply rewarded.  In the course of a 10 minute walk, I saw six bright meteor trails.  All but one moved from nearly straight up moving down to just north of due west.  The outlier moved from overhead to the southeast, passing right by bright Jupiter.

When the dogs and I got nearly to the end of our driveway, Race (our border collie) suddenly went on full alert: hackles raised, aggressive stance aimed back toward the house, and subterranean rumbles.  Then it was on to the full alarm bark – awesomely loud at 4 am.  I thought at first that some large animal was out and about, and that somehow Race (and not the field spaniels) was the first to notice.  But it turned out to be Debbie, out in the yard with a flashlight.  The field spaniels all seemed to know that it was her and it was ok, but Race was quite alarmed.  Then Debbie, laughing, made some friendly noises so he could recognize her, and then Race practically yanked me off my feet trying to go see her...
Posted by Unknown at (permalink) 4:10 AM No comments: