Quote of the Day (Extended Edition)...

Read and absorb this:

And that is why we should not revert to the foreign policy of years gone by, of the world weary, the supposedly sensible practitioners of caution and expediency, who think they see the world for what it is, without the illusions of the idealist who sees what it could be.

We should remember what such expediency led us to, what such caution produced. Here is where I remain adamantly in the same spot, metaphorically as well as actually, of ten years ago, that evening in this city. The statesmanship that went before regarded politics as a Bismarck or Machiavelli regarded it. It's all a power play; a matter, not of right or wrong, but of who's on our side, and our side defined by our interests, not our values. The notion of humanitarian intervention was the meddling of the unwise, untutored and inexperienced.

But was it practical to let Pakistan develop as it did in the last thirty years, without asking what effect the madrassas would have on a generation educated in them? Or wise to employ the Taliban to drive the Russians out of Afghanistan? Or to ask Saddam to halt Iran? Was it really experienced statesmanship that let thousands upon thousands die in Bosnia before we intervened or turned our face from the genocide of Rwanda?

Or to form alliances with any regime, however bad, because they solve 'today' without asking whether they will imperil 'tomorrow'? This isn't statesmanship. It is just politics practiced for the most comfort and the least disturbance in the present moment.

I never thought such politics very sensible or practical. I think it even less so now. We live in the era of interdependence; the idea that if we let a problem fester, it will be contained within its boundaries no longer applies. That is why leaving Africa to the ravages of famine, conflict and disease is not just immoral but immature in its political understanding. Their problems will become ours.

And this struggle we face now cannot be defeated by staying out; but by sticking in, abiding by our values not retreating from them.

It is a cause that must be defeated by a better cause. That cause is one of open, tolerant, outward-looking societies in which people respect diversity and difference in which peaceful co-existence can flourish. It is a cause that has to be fought for; with hearts and minds as well as arms, of course. But fought for, nonetheless with the courage to see it through and the confidence that the cause is just, right and the only way the future of our world can work.

This is from a speech by a politician we would consider quite “liberal”, as that term is used in American politics – spoken by Tony Blair, former British Prime Minister, just the other day in Chicago.

If we had a Democrat who thought this clearly, who communicated with such clarity, who was so direct and specific, and whose view of the existential threat posed by Islamic fundamentalism was so closely aligned with mine – I'd vote for him, regardless of the many other liberal views he held that I disagreed with.

Because this is the most important thing, the threat to our very being.

And this is what scares me the most about Obama. The rest is just details...

Your Eyes Suck at Blue... 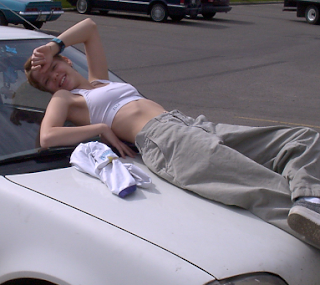 The fetching lass at right is Traci, whose entire involvement with this post is as a demonstrater model – for an interesting visual phenomenon that has some real-world implications for how we store and display photographs.

The gist of this notion is that our eyes pick up very little detail in blue. More precisely, our spatial resolution in blue is far worse than it is in green (especially) or red. This means that an image's actual quality in blue isn't very important to our perception of it – and that means there's a compression opportunity.

Check out the all the details in this excellent article.
Posted by Unknown at (permalink) 5:06 AM No comments: 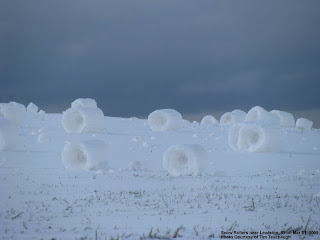 These are a natural phenomenon I'd never heard of before – the rare “snow roller”. In this particular case they were spotted on the Idaho panhandle.

First, absorb this statement concerning Abdiwali Abdiqadir Muse, the sole surviving pirate of the group that hijacked the Maersk Alabama:

"I think in this particular case, there's a grave question as to whether America was in violation of principles of truce in warfare on the high seas. This man seemed to come onto the Bainbridge under a flag of truce to negotiate. He was then captured. There is a question whether he is lawfully in American custody and serious questions as to whether he can be prosecuted because of his age."

What's your reaction to that?

If you said to yourself “Yeah, why are they prosecuting this poor guy?”, then please leave my website and move to somewhere like, say, France.

If you said to yourself “I need more ammunition and less lawyers”, well, then, you're in the right place.

So far as I'm concerned, the only mistake our military made with the surviving pirate is the word “surviving”.

Oh, I guess those two statements are more or less equivalent, aren't they?

Quote of the Day (Photo Edition)... 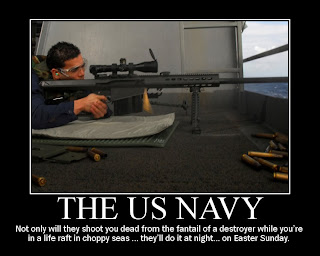 Susan Boyle on Britain Got Talent
by dwarthy
Posted by Unknown at (permalink) 4:58 PM No comments: 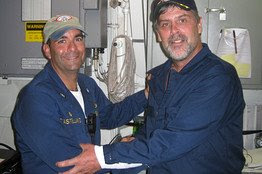 From the Wall Street Journal:

The kidnapped captain of the Maersk Alabama has been rescued and is safe aboard a U.S. Navy ship.

And I can't help but love the image this projects to the world and to the cursed Somali pirates: you screw around with an American ship, not only do you not have a crew, a ship, and a cargo to ransom – you die at the hands of American warriors.

I don't often agree with Obama on anything at all, but from what I've read he played this exactly right – especially issuing standing orders to the men on the scene to use deadly force if they felt Captain Phillips' life was in danger. No micromanagement like Carter – much to his credit, Obama left this to the pros.

And those pros pulled off something very impressive here. I can tell you from personal experience in the Navy that a lifeboat towed some 80 feet behind a warship is going to be bobbing and weaving all over the place – not an easy shot, even at the relatively short range. The three Somali pirate assholes had guns to the head of Captain Phillips, and the Seals took all three of them out before they could fire a shot. Nice work, guys. And thank you, sirs, for your service to this country.

Posted by Unknown at (permalink) 4:15 PM No comments: 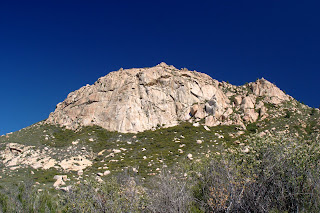 Debbie and I did a little four-wheeling today, in a beautiful area that was entirely new to us – to our shame, as it's very close to home! We drove through areas between Corte Madera, Skye Valley, and Lake Morena, as you can see on this map. We took a big loop, counter-clockwise from a junction called “Four Corners”.

The first part of the trip as we left Four Corners was our favorite part – from there up to Los Pinos, down to the saddle between Los Pinos and Corte Madera, and then down Espinoza Creek to the Corte Madera road. This stretch had it all: grand views (especially of Corte Madera itself), pine forests, meadows, and oak forest.

Shortly after the junction with Corte Madera Road (where we start to head down toward about 10 o'clock on our loop) we entered lands that burned in the October 2007 wildfires. While it was interesting to see the recovery, and there were some beautiful wildflowers in there, we still much prefer the unburned areas.

Here are some more photos from today: 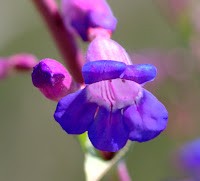 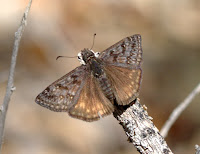 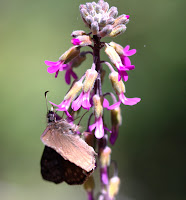 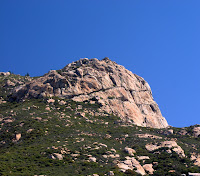 Posted by Unknown at (permalink) 3:57 PM No comments:

Though I'm not entirely sure what it means... From the San Diego Union-Tribune:


The Jamul Indian band has dropped a lawsuit in which it was accusing state officials of meddling with its casino plans.

Neither side explained what was behind the joint request to dismiss the lawsuit in San Diego federal court.

A spokesman for the California Department of Transportation, or Caltrans, said he couldn't talk about the case until the judge agreed to dismiss it.

Repeated calls to tribal officials and their lawyers were not returned.

However, a lawyer for a group of neighbors opposed to the casino said the tribe agreed to submit its plans to a state environmental review.

There are several possibilities here. The one that seems most likely to me (but keep in mind that I am not a lawyer, nor do I have full knowledge of the situation) is that the Jamul Indians no longer have the financial resources to pursue this expensive litigation, and they are probably under some pressure from Lakes Entertainment to resolve the situation in such a way that some kind of profitable casino can be built, so...they reached an accommodation with CalTrans.

So I'm afraid this probably increases the chances of a casino being built...but most likely it would be a casino at a much-reduced scale.

A reader emailed me with news of a dog wandering around the area around Lyons Valley Road and Jamul Highlands Road – near the Mormon Church and just down the street from the middle school. He's a nice-looking dog, but won't let anybody approach. He must be looking for his owner!

My reader isn't sure if the dog has a collar or tags. If this dog looks familiar to you, take a look around that area. If you've got questions or need more information, write me and I can relay your questions to my reader... 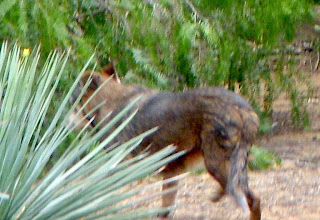 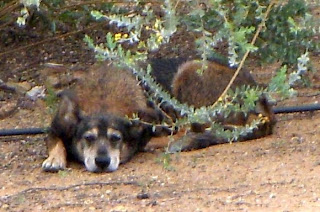 Posted by Unknown at (permalink) 3:28 PM No comments:

Amber from the Steele Canyon Veterinary clinic writes to say that a male dog has been found near the Jamul Post Office. It's currently at the clinic (behind the 7-11 at the corner of Campo Road and Steele Canyon Road). You can reach them at 619/669-7274.

This dog would like to go home – if your little guy is missing, do give them a jingle...

Posted by Unknown at (permalink) 5:12 PM No comments: