Paradise ponders, part II...  Well, I got to take my afternoon walk with Miki and Race.  Boy were they excited!  That first photo below shows the initial hill we walk up, with the Wasatch Mountains in the background.  In the field off to the right, past the white fence, we saw a kit fox again.  Actually, I saw a kit fox.  Our two little doggies never saw a thing :)  They were very busy with their noses to the ground, looking for voles. 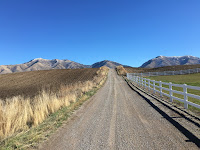 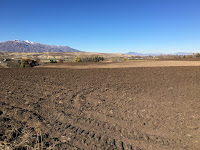 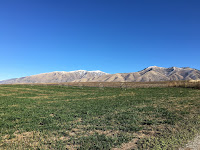 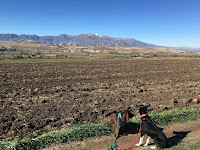 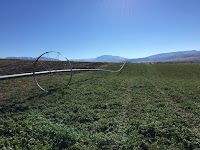 It was a beautiful day for a walk!

Later this afternoon the UPS man brought the plasma cutter I've been waiting for.  I took it out to where Elray the well driller was working, as I'd promised him he could look it over when I got it.  He pronounced it a nice piece of gear :)

Today he was able to get past the “heaving sands” layer that had him stopped yesterday.  To do it, he injected foam down the well to stabilize the loose sand walls.  Then he sent the drill bit all the way down to 306', cleaning out the 100' of sand that had settled in the well.  After that, he hauled all that drill (16 sections, 20' long each) out of the well, welded another 10' of casing on top of the 300' he already had in the ground, and started pounding.  It worked!  He got through the sand layer, being temporarily held in place by the foam, and then down into a softer layer.  Most likely that's a layer of clay.  On Monday, he'll send all that drill stem back down the hole, and try drilling through the clay (or whatever it is he struck).  The hope is that below that layer is a water-bearing layer.

Elray told me today that he had now surpassed the depth of the previously deepest well he's ever dug in the south part of Cache Valley.  He's dug plenty of wells over 1,000' deep, but none near here.  Hopefully our luck will change here, and we'll tap into some nice water...
Posted by Unknown at (permalink) 4:25 PM No comments:

Spawning salmon...  My neighbor Alan L. made this video of the kokanee salmon spawning this year in Cinnamon Creek (the creek feeding Porcupine Reservoir).  He's a photographer by profession, and apparently has a Go Pro (or something like it)!
Posted by Unknown at (permalink) 1:26 PM No comments:

Paradise ponders...  Well, my tool storage issues have been completely solved.  Below you can see both of the cabinets I bought: one (oak) for my woodworking tools, the other (steel) for everything else.  I'm very pleased with both of them – they're very well made, extremely heavy duty, and should last me until the end of my days.  They're also very roomy – I won't even come close to filling these things up with the tools I own today, so I'll have plenty of room for the inevitable additions I'll make along the way. 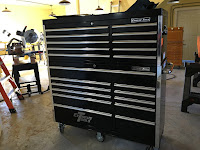 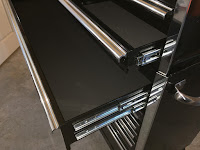 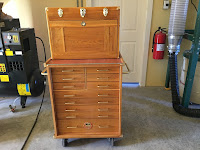 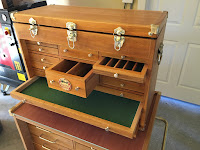 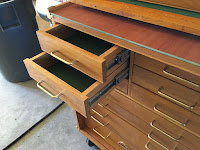 The dogs and I are going to go for a walk in just a bit.  It's a gorgeous day outside – wall-to-wall sunshine, temperature in the high 40s, crisp and slightly breezy.

Last night I assembled a “janitorial” cabinet for Debbie, down in the cattery.  It's made of particle board and melamine, so it weighed a lot – 190 pounds, to be precise.  I took it out of the boxes upstairs, then carried it down in pieces.  Much easier and safer that way!  It assembled without a hitch except for the door handles (of which there are three).  These had several problems, all related to stripped threads.  Only one handle was actually ok; one was completely unusable.  This morning I emailed the company and asked for replacement parts.  An hour later I had my answer: they were on the way!  That's very nice service, if it proves to be accurate.

Not so pleasant was my experience yesterday with my welder.  It arrived (via Fedex freight), but ... the carton had a couple of holes that looked exactly like the tines of a forklift.  The driver and I removed the carton, and there was a great big gouge and dent in the (very heavy duty) steel case of the welder.  I thought on it for a bit, then decided to refuse delivery.  That means Fedex had to send the welder back to the factory, and I had to go deal with getting a replacement.  On the latter, I called this morning and discovered that the factory will do nothing until they receive the damaged welder, at which point they will credit me back what I've paid.  Then I can reorder, starting the entire process all over again.  There's nothing they're willing to do in order to speed that up.  Sheesh.  That means I won't get the welder for about two weeks...
Posted by Unknown at (permalink) 10:20 AM No comments:

A short history of NTDS...

A short history of NTDS...  Some of my readers may remember that when I was in the U.S. Navy ('71-'77), I was responsible for repairing and maintaining the Naval Tactical Data System (NTDS) on the USS Long Beach.  Something I've never seen before is a history of NTDS, but this morning I stumbled across one on the Internet.

It's a short history, probably less than 20 pages if you were to print it.  The USS Long Beach gets several mentions, especially in Chapter 7, which describes some of my experiences on it.  In particular, it describes the PIRAZ role that the USS Long Beach performed off the coast of Vietnam.  That's what we did on the cruises I was part of.

This history takes on the biases of the author, as all histories do.  This particular writer is inclined to overstate the effectiveness and (especially!) the reliability of the NTDS system and its components.  One example: the author cites the Beacon Video Processor (BVP) as a critical component of NTDS.  On the three ships that I worked on (USS Long Beach, USS Enterprise, and USS Truxton), the BVP never worked and was nearly always turned off.  I made a valiant attempt to repair the BVP on the USS Long Beach, but I was stopped by the discovery that the schematics on board didn't match the machine on board – and it was far too complex a machine to attempt reverse engineering.  When we contacted a facility on base (in San Diego) to try to get schematics, we were told to shut the BVP off and forget about trying to make it work.  The author also cites the successes of the Talos missile system, which were real enough – but he left out the even more spectacular failures of Talos.  One of those I was a witness to: a Talos missile we launched turned around and flew between the forward and after superstructures on the USS Long Beach, scaring the hell out of all of us watching.

It all seems like ancient history now, but it made for fun reading for this ancient NTDS tech...
Posted by Unknown at (permalink) 6:43 AM 3 comments: