An elderly man from Miami, Florida had a massive heart attack and the family drove him to the emergency room at Baptist Hospital. After a while the ER doctor appeared wearing a long face. "I'm afraid Grandpa is brain-dead, but his heart is still beating."

"Oh, Dear God," cried Grandma, "We've never had a Democrat in the family before!" 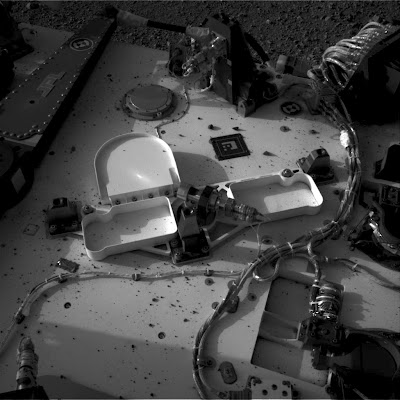 More and more instruments and cameras are coming online.  The photo at right (click to enlarge) is from one of the navigation cameras, looking down at Curiosity itself.  You can see lots of pebbles strewn about, apparently kicked up by the sky crane's rockets as it winched Curiosity down onto the surface.

Those cable-tied, neat bundles of cables bring back strong memories for me, of my days in the U.S. Navy.  Much of the equipment that I worked on (as a repair technician) was constructed in the same labor-intensive fashion.  Constructing those bundles was a craft unto itself, and certain pieces of gear I worked on contained elaborate “harnesses” (as they're called) that were works of art.  I really hated it when I had to break one apart to repair a broken wire...
Posted by Unknown at (permalink) 3:47 AM No comments:

The Politics of Programming...

This is strictly for the programming geeks.  Steve Yegge, the famous ranter, has posted a rather interesting piece hypothesizing the existence of a spectrum of “politics” in programmers.  Not politics in the sense you're familiar with, but a kind of liberalism vs. conservatism in the way a progammer views his or her craft.  He cites an example familiar to any programmer as a “tell”: a preference for static typing (e.g., C or Java) vs. dynamic typing (e.g., JavaScript or Perl).  Here's that discussion:

Why yes. Yes, they are. Static typing is unquestionably one of the key dividing software-political issues of our time. And static typing is a hallmark of the conservative world-view.

In the conservative view, static typing (whether explicit or inferred) is taken on faith as an absolute necessity for modern software engineering. It is not something that one questions. It is a non-issue: a cornerstone of what constitutes the very definition of Acceptable Engineering Practice.

In the liberal's view, static typing is analogous to Security Theater. It exists solely to make people feel safe. People (and airports) have proven time and again that you can be just as statistically secure without it. But some people need it in order to feel "safe enough".

That's a pretty big difference of opinion -- one I'm sure you can relate to, regardless of how you feel about it.

Yup, I can relate to that. By that measure, I'm a programming liberal – I love dynamic typing, and feel constrained every time I program in a statically-typed language.  And I know lots of programmers who would instantly agree with the “conservative view” Steve outlines above.  It's an interesting thought that an entire suite of preferences goes along with your “programming liberal” or “programming conservative” world view.  On quick examination, I'd say there's definitely some truth to the notion.

Steve looks at the question of whether there's a correlation between one's politics and one's programming politics.  He guesses “no”, but on intuition rather than any actual examination.  My own politics are hard to shoehorn into any category other than “not liberal” – I wonder if the same is true of my programming politics?  To figure that out, we'd have to have a much longer list of the liberal/conservative programming politics divide...
Posted by Unknown at (permalink) 3:42 AM No comments: 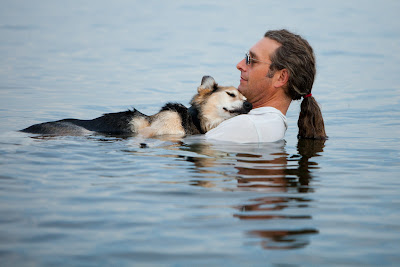 The man is John Unger of Wisconsin, and the dog is 19 year old Schoep, whom John got as a puppy.  John credits Schoep with (quite literally) saving his life during some dark days.  Now Schoep is very old (in dog years), and has developed debilitating arthritis, making it nearly impossible for him to sleep.  John accidentally discovered that Schoep's pain was relieved when in the water – so now John takes Schoep out into Lake Superior every night for some much needed relaxation.  Hannah Hudson, the photographer and John's friend, caught this moment between a man and his much-beloved dog...
Posted by Unknown at (permalink) 3:19 AM No comments: