Paradise ponders: new-mown hay, albacore poke, pump plumbing, and tiny battery edition...  I just finished eating an awesome meal of homemade albacore avocado poke over brown rice.  The recipe came from the seafood manager at Macey's, and Debbie took it from there.  We picked up 20 ounces of fresh albacore at Macey's this morning, and ate every last bit of it a few hours later.  That stuff is make-your-brains-fall-out good! 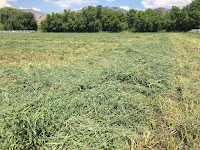 Tim D., my friend and neighbor, decided to mow his fields today.  The swather came through and did the whole job in about 20 minutes – just over four acres down in windrows, just like that.  The photo at right I took just a few minutes ago, kneeling in the field 100' or so north of our house, looking east.  The delicious aroma of new-mown hay was almost overwhelming.  I never get tired of that.  Wish it lasted longer than just a few hours... 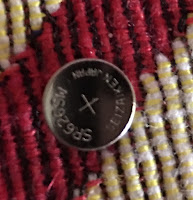 Debbie's got a wooden clock that cut out in the silhouette of a field spaniel.  The clock is about the size of an old-fashioned pocket watch, set into a cutout in the wood.  That clock runs on a tiny little battery, and the battery finally ran out after ten years or so of operation.  I managed to get the battery out of the clock, but then I couldn't read the letters on the damned thing.  The photo at left shows it sitting on a piece of cloth – it's not much bigger than the threads that cloth is woven from!  I had no magnifying glass at hand, but ... by taking a photo of it and enlarging it, I could read the battery just fine.  Handy, these smartphones!  :) 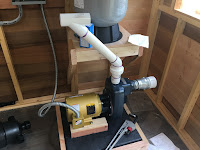 My main objective for today was to get a start on doing the plumbing around my new irrigation pump.  All the parts haven't yet arrived (and won't for a few days), but there were some parts I actually could start on.  It's not much, but it's a beginning!
Posted by Unknown at (permalink) 2:56 PM No comments: